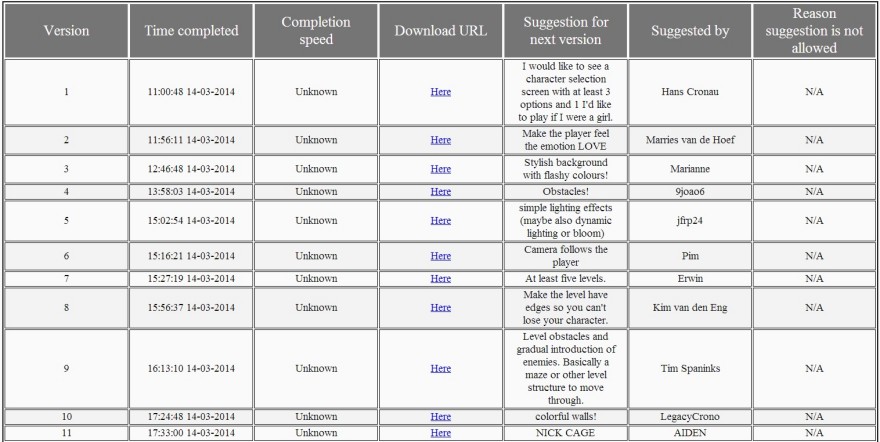 Inspired by the multiplayer collaboration of TwitchPlaysPokemon, Dutch developer Aran Koning—with help from friends Sander Vanheste and Herman Groenenboom—has put his game development skills under the jurisdiction of players. The first player to beat his game is allowed to ask for changes and additions to it, which Aran then has to make as soon as possible. His one request is reflected in the game’s title: “please be nice 🙁”

Aran started this public project on March 14th, a Friday, and managed to meet 45 demands over the first weekend. What started off as a red square that you moved to a checkered patch in the corner is now a 10-level shooter with scrolling levels, psychedelic backgrounds, a gun that shoots bunnies, a “dome fossil mini boss,” exploding bridges, and a kawaii uguu level.

a 10-level shooter with scrolling levels, psychedelic backgrounds, a gun that shoots bunnies

One player going by the name “ivan2340” even put himself into the game, asking for a character named “” and for a certain picture to be used to represent him in the character selection screen. Everything from simple features like a fullscreen mode to elaborate boss set-ups and gravity altering mechanics have been implemented.

While the promise of the player-led development is that any feature can be submitted, one has been denied so far, and that is the ability to twerk. A footnote on the website states that any requested feature considered malicious, offensive, or being overly ambitious, will instantly be scrubbed. In this case, the person asking simply for “twerk” and going by the name “mom” is an internet troll; they were bound to show up at some point.

Aran is livestreaming the work he is doing on please be nice 🙁 so that players can see the steady results of their collaboration. You can watch the stream over at twitch.tv/pleasebenicegame. You can also see the history of the game’s evolution, which includes all of the requested features and download links for each version of the game.

If you want to be one of the lucky few that gets the chance to send in a game feature idea—whether the crazy or the mundane—you’ll have to beat the current version of please be nice 🙁 before anyone else.