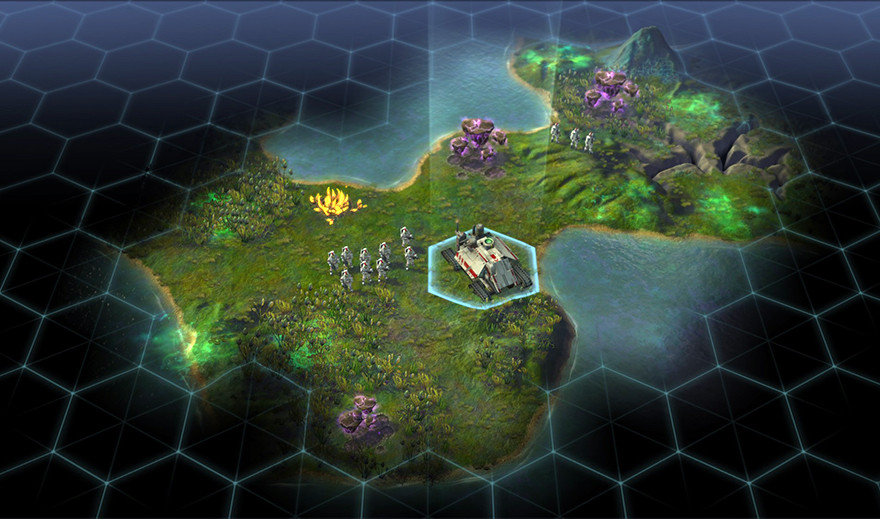 For all the bluster that accompanies the release of new turn-based strategy games, it’s become painfully obvious that no new entry into the genre can ever quite escape the gravity well that is the Civilization franchise. Though peppy upstarts purport with borderline Oedipal obsession to “redefine” the genre with comical periodicity, few have ever really put Civilization’s place atop the strategy hierarchy in jeopardy. Case in point: new Civilization releases are preceded by the kind of pomp and circumstance typically reserved for visiting dignitaries, and it’s no exaggeration to say that Firaxis Games’ Civilization: Beyond Earth has borne more weight of expectation than any other title in 2014. And small wonder—Beyond Earth is self-avowedly the progeny of two of the series’s high points: 2011’s Civilization V and 1999’s Alpha Centauri.

That’s an impressive pedigree to uphold, and, to its credit, Firaxis Studios has designed a palimpsest of a game that is faithful to its symbolic parents even as it tries, if only somewhat successfully, to establish an identity somewhere outside of their lengthy shadows. Traits passed down from Alpha Centauri and Civilization V are recognizable throughout Beyond Earth, though it becomes obvious rather quickly that Sid Meier’s latest takes quite a bit more after its earth-bound elder. Recycled parts of Alpha Centauri—technologies, unit models, topographic features, and those just-barely-coherent faction leader quotes—are numerous, but are fully integrated into a facade that looks (and plays) a lot like Civilization V. Chances are, if all you want from Beyond Earth is Alpha Centauri 2 or Civilization VI, then you can probably find a way not to be disappointed.

Yet to consider Beyond Earth solely on the terms set by its predecessors (admittedly a difficult temptation to avoid) is to deny Firaxis’ latest effort its uniqueness and, moreover, to miss what it has to say about the future of mankind. Designing “historical” simulators (even—or especially—when that “history” has yet to happen) is never ideologically neutral. In representing civic dissent or technological innovation, designers of Civilization-esque games have always made assumptions about what matters in the past. Inevitably, these assumptions are made from the perspective of the present; that is, after all, the nature of interpretation. This is even more true when one’s topic is the future. With no need to account for primary evidence, authors can let their imaginations run wild—the future becomes a pristine canvas upon which we can rehearse our cultural anxieties and project our utopian dreams.

To that end, imagining the future of humanity in 1999 means something very different than doing so in 2014. Alpha Centauri, the first version of which had an option for multiplayer by email, was designed in and conditioned by a world in which “smartphone,” “iPod,” and “social media” had no meaning. If Firaxis’ magnum opus represents 1999’s vision of the future, then Beyond Earth is that of 2014. Both games begin with the premise that the earth won’t hold us for long—what happens next, though, that’s where the real speculation begins.

It matters quite a bit, in other words, that the factions of Beyond Earth are distinguished by earth-bound geographies and not by ideological preference, as they were in Alpha Centauri. Gone are the bible-thumping Believers and the monopolists of Morgan Industries; in their place are the Franco-Iberian Alliance and the Pan-Asian Cooperative. Did the prospect of a post-racial and post-national humanity, one in which we are bound not by blood or birth but by ideals, seem within reach in 1999? Perhaps it did; recent history has stripped us of such optimism, and Beyond Earth’s chastened take on community formation reminds us that the sins of the past will continue to haunt us in the future.

advancement is no longer a linear phenomenon

More significantly, though, Beyond Earth reengineers one of turn-based strategy’s defining features: the “tech tree,” or, as it’s christened in Beyond Earth, the “tech web.” That difference isn’t just semantic. Players still accumulate and expand research on new technologies, but advancement is no longer a linear phenomenon. As a metaphor for technological innovation, this distinction embodies (loosely) the two models of knowledge, the “arborescent” and the “rhizomatic,” described by the philosophers Gilles Deleuze and Félix Guattari. In their view, arborescent knowledge builds upon itself, reaching ever upward towards some deterministic end. In the case of Civilization V, that tech tree “ends” with “Particle Physics” and “Nanotechnology,” and in Alpha Centauri, it’s “Temporal Mechanics” and “String Resonance.” In either case, all technological advancement converges towards some ultimate goal.

Rhizomatic knowledge, by contrast, counters this brutish determinism by refusing to draw a straight line through the knotted histories of innovation. It’s not that technologies don’t have precursors—it’s hard to imagine “Currency” without “Mathematics”—but that the tech tree assumes far too much causation. For this reason, many present-day scholars prefer the rhizomatic model to the arborescent one. By refusing to privilege a single point towards which advancement rushes and at which innovation “ends,” the rhizomatic tech web of Beyond Earth enacts a more nuanced approach to knowledge known and unknown.

Moreover, with the disposal of a one-directional tech tree, Beyond Earth forces the player to choose some technologies at the expense of others. Pragmatically speaking, it’s extremely unlikely that a single faction will generate enough research to explore the entire tech web, necessitating choice. It’s near-impossible to game Beyond Earth for 100% completion, and as each game rushes towards its conclusion, it’s easy to catch one’s self regretfully looking over a half-empty tech web and wondering what might have been. Even for the most skilled of players, every game of Beyond Earth leaves a junkyard of unrealized utopias behind.

What emerges in playing Beyond Earth, then, is a significantly less hopeful but somewhat more truthful, or at least more realistic, vision of what awaits us. The human story has never been one of teleological progress, marching towards some unitary, transcendental goal. It’s more of a fumbling in the dark, reaching out taking hold of whatever is in reach; sometimes it’s for good, sometimes it’s for ill, but usually, it only is—full stop. There’s little reason to expect that the future will be any different.

To that end, Beyond Earth grasps its topic less firmly, but more fully, insisting that whatever future comes to pass won’t be the only future that might have been. Truth be told, though, Beyond Earth likely won’t have quite the staying power of either Alpha Centauri or Civilization V. Ultimately, Firaxis’s latest effort feels more like a sci-fi mod of Civilization V than a fully-formed project in its own right. But perhaps we should not be so quick to dismiss it, if not for play, then at least for thought. What we ‘know’ of the future is a measure of what we ‘know’ of ourselves, and for all its faults, Beyond Earth is a little more sober about the prospects for humanity. As one leader opines at the outbreak of all-too-familiar hostilities, ‘the problems that plagued us on earth have followed us to the stars.’ How ironic (or is it poetic?) that Beyond Earth carries so much of Civilization V into the cosmic deep.