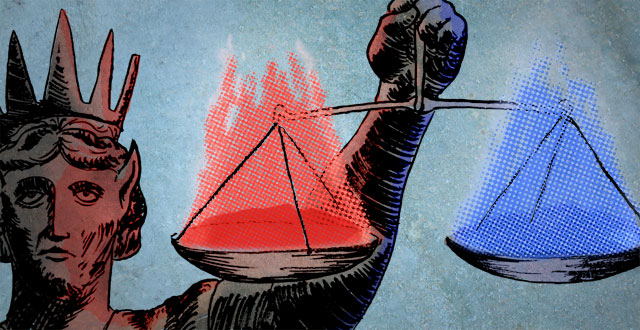 “During your life as a hero, you will embark on a series of quests to right what is wrong, to defend the weak and punish the wicked, and to make the world a better, safer place.”

Sounds like the platonic goal of a lawyer, right? The description is found instead on the official website to Activision Blizzard’s massively successful massively multiplayer online game, World of Warcraft. But what happens when you destroy monsters and contract loopholes from multinational conglomerates? Kill Screen spoke with someone who tried.

“H” belongs to the Blood Legion guild, ranked eighth in the world. Several times his Blood Elf priest ranked No. 1 overall, out of the countless thousands that play WoW for the advanced end-game content. He also just graduated from law school and, in the fall, will join the litigation department at a top New York law firm. His new employers have a strict rule against talking to the press.

“If the PR department finds the article,” he wrote in an email after our phone conversation, “decides it is about [them], and doesn’t like it, they will hunt me down.”

How long have you been playing WoW? Who introduced you to it?

The first time I saw it was [five years ago] when one of my friends got a new Mac. At the time I was playing Oblivion on my Xbox 360. I had tried playing WoW, and found hitting skeletons slowly over the head with my knife was not very useful since I was playing a warlock at the time. So I went back to Oblivion. You kind of run out of things to do there, eventually. I went back to WoW, and that’s when I pushed past the first couple of levels.

What happened that eventually drew you into the world, and made you a believer?

It has this really steep learning curve at the beginning. You just sort of have to push through the first 10 levels and if you make it through there, you get enough abilities that you start to kind of … your character takes on more of a personality.

While you’ve been doing this, you’ve also been attending law school. How do you balance your day-to-day academic life with this other interest?

To say it comes out of time management would be lying. Warcraft is a group activity in a sense. It’s a giant coordination game. You need everyone to be logged in at the same time in order to effectively play. But that means the rest of the time, you don’t need to be there. And I only find the group-play aspect interesting, or things that lead to being better at the group-play aspect. So that leaves a lot of free time.

And being in a better guild reduces the amount of time you need to play. For example, to clear the content of the current expansion, we could do it in like three hours. In one night. I mean, my Tuesday night is shot. But every other night is completely free. Whereas I could actually be clearing the same content with a worse group of people, and it’d be a much bigger time sink. So it has a lot to do with minimizing the WoW time when you need to. You just sort of rebalance between the two, depending on what’s relevant in each at the time. Normally you can plan ahead so you don’t have a big issue in either.

Sounds like time management to me. Why the disclaimer?

Um … yeah. I was trying to figure out a polite way of saying I’m kind of good at law school, so I don’t need to put a huge amount of time into it.

What sort of specialty do you hope to do in your law career?

There are two things I’d be equally happy doing … T. Boone Pickens? I don’t know if you’ve seen him on TV.

Yeah, that guy. He’s been known to go and try to buy a whole company at a time. So the board of that corporation will try to entrench itself in order to prevent the takeover.

For some reason I just always found board takeover stuff, the proxy battle stuff, to be pretty interesting.

Barring that, I actually think international law is particularly cool. It’s just that there’s not a huge amount of it going on. It’s within general litigation, but for me to get into it would be some degree of personality fit with those people. Which I think I have. It’s just in a very cool level of formation at the international level.

You said that for WoW there’s this steep learning curve, and it seems like very much the same thing for law. How do certain abilities or skills that you’ve established or honed in one field carry over to the other?

In terms of practical skills, I’m better at typing due to both. And I guess they both enhance my carpal tunnel syndrome. But otherwise, it’s more of a complementing each other at a theoretical level.

Game theory is pretty much why I went to law school. And if you look at it, Warcraft is sort of a semi-lawless environment. Where you just have people interacting with each other, and a legal system that only kicks in in particularly egregious situations, where you signed a Terms of Service in advance. So the same thing sort of appeals to me in both systems—in the legal system and World of Warcraft—in terms of large social coordination and different ways of pulling that off.

One of the strains of thought right now is, the common law has a streak moving towards economic efficiency, just by nature of what gets litigated and what doesn’t. So it allows for organic rule formation. If it works, they keep it. If it doesn’t work, they throw it out. And in that sense, it’s sort of a system that’s creating itself as time goes on, based on what people need. World of Warcraft, being a completely lawless society, you get to see that going on.

And then it’s even funnier, when you have almost God in the form of the corporation that owns the company, stepping in and making a big change, seeing how that affects the entire society. So I always found that very interesting at a theoretical level, and I’m pretty sure very few other people share that interest with me.

Many people play [WoW] and enjoy getting to know the other players, and it’s a social outlet for them. But those aren’t reasons that drive you to play.

I think WoW kind of has a social stigma, in the sense that people that don’t play don’t realize the sheer social aspect of it. If you’re spending 30-hour weeks with these people, you’re going to get to know them. I’ve met in person a lot of the people I’ve played with. Some of them, I’d be doing something completely independently on the computer and still have the voice-chat program set up so I could be talking to them while I did it.

But that’s not the primary reason I play. I was talking to my guild leader, and they were saying, “Don’t do it if you don’t find it fun,” and I was like, “Well, I find winning fun.” Which they were very pleased to hear.

What do your parents think about your top-level WoW playing?

I remember one time where I was … you basically had to go in and kill four bosses in 20 minutes. And then you got a cool bear if you did it. My father came in and was quite insistent that I help him move a painting. And I blew him off. I took off one ear of my headset, was like, “I really just cannot deal with this right now,” put the other headset back on, and continued about what I was doing. Afterwards, I mean, he was pretty pissed. I was like, “Look, would you walk onto a soccer field, grab my arm, and say, ‘I need you to help me move a painting?’” They’re not a fan.

Do you foresee this changing over time? Where everyone will be engaging in some sort of MMO in the future? Or are there just certain sects of people that won’t be interested, and will not understand the larger implications of it all…

One of my favorite economists wrote a blog post about online dating, and basically what he said was, “It lets weird people find each other with much lower transaction cost.” So I think that as the internet becomes more prominent in peoples’ lives, it’s going to let them be much less geographically bound in the social groups that they form. At a certain point, the fact that it’s getting together to go kill a boss at a dungeon in a pool of magma or something, it’s just going to be a different form of doing that. As opposed to being in the, you know, International Gardeners club.

You recently hung up your robes to focus on your upcoming job. What other games do you play that might be more sustainable to a law career?

I used to play a lot of real-time strategy games like StarCraft. Command & Conquer was by far my favorite childhood game, just like Stratego or something like that was my favorite boardgame. I’ll probably go to something like that, that has a pause button. I never found watching television or reading fiction to have the same level of fun.

I thought you said “spunk.” That could have worked, too, but I just wanted to make sure I heard you correctly.