Fans of Jane Austen’s work have brought her world into almost every medium that exists—from radio, with the BBC’s six-part dramatization, to film, most recently with Love & Friendship. It was just a matter of time before someone decided that Austen’s novels would be great inspiration for a videogame.

Judy L. Tyrer, founder of 3 Turn Productions, is that fan, and has just released a beta for Ever, Jane. It’s a massively multiplayer online game (MMO) set in Austen’s own setting, Regency Period England. To start, players arrive in the fictional English town of Tyrehampton, where they can gossip, attend balls, and walk through the window-shops in the developing little town. The game is driven by role-playing and there are a few quests available with more in the works.

duty is a complex topic

Austen’s novels take place just before her lifetime, at the end of the 18th century in England. This was a time of strict social hierarchy, when women were largely dependent on men for financial security, and her novels criticize much of these social structures and conventions. While many are familiar with the romance in Austen’s novels, her moral lessons are less well-known. Austen’s first novel, Sense and Sensibility (1811), which follows the story of the Dashwood sisters, is a good example of her lesser-known themes. While Elinor Dashwood ends up with the man she loves, the younger Marianne does not. Marianne has too much sensibility (or emotion) and not enough sense to see that her mutual admirer, Willoughby, is immoral. By the end of the novel, Marianne is forced into marriage with an older, more honorable and affluent man, whom she eventually learns to love. It is this socially-conscious literary world that the creators of Ever, Jane seek to bring to an MMO. By developing a world based on talk and gossip, Tyrer is hoping to break the genre’s “kill stuff rut” that she believes the genre is stuck in.

The attempt of Ever, Jane’s creators to replicate Austen’s world is strongest in the visual department. Novels encourage a reader to visualize the scenery for themselves and so the use of low-fi visuals in the game encourage a similar appeal to the player’s imagination. Perhaps in a more detailed game the player would be discouraged from sitting at a piano to play when their character’s fingers could not actually touch the keys. But many times I’ve stumbled upon players describing their musical performances while sitting next to the unmoving piano. I’ve even witnessed a duet by a very scandalous couple, brushing hands while they play a soundless song (there’s no in-game sound yet). There are also plenty of historically accurate visual flourishes despite the limitations. English flowers dot the fields, period appropriate dress is available for male and female characters, and the architecture of the buildings is impressive. Everything you can see delivers the sense of being in that time period. But the fusion of Austen’s novels with MMO mechanics in Ever, Jane is not quite so harmonious.

Character stats are one area of struggle. Usual stats like “strength” have been adjusted for the setting to include status, kindness, duty, and happiness. While these are major themes in Austen’s novels, the game hasn’t achieved the kind of nuance with a character that Austen does in her novels. In fact, one of the book quotes presented on a loading screen seems to betray a lack of understanding of what message Austen is trying to get across to the reader about one character stat: “duty”.

The quote is from Mansfield Park (1814), when Sir Bertram is scolding his young niece, Fanny, into doing what he perceives as her duty. It reads: “you must be aware, Fanny, it is every young woman’s duty to accept such a very unexceptional offer as this.” This Uncle is deeply confused by his niece’s refusal to marry a very rich man, Henry, who has proposed to her. Fanny is too shy, or too dutiful, to explain to her Uncle that she knows this man has poor character (and that she loves another), so she is kicked out of the house. Her position as the pet favorite niece is restored when Henry’s true character comes to light. 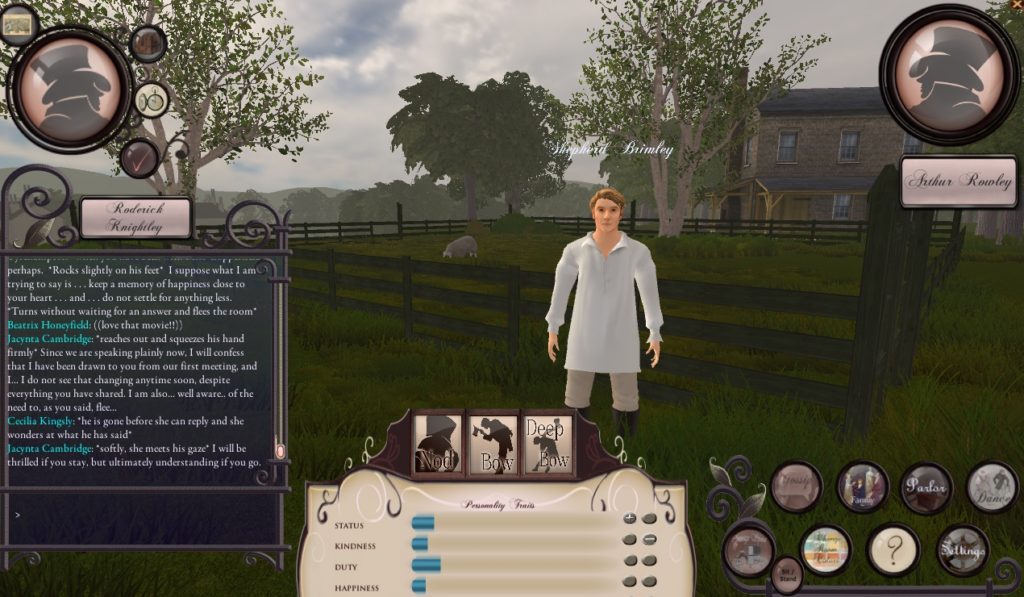 All kinds of arguments can, and have, been made as to what this means about the nature of duty. Does Austen think that Fanny’s complex take on duty to her family was morally right, or is Fanny a parody of the ultra-dutiful girl, one who does not exist? Austen scholar Claudia L. Johnson takes the novel rather literally but points out other’s struggles with it. She explains that, “many other critics have averred that something is wrong with Mansfield Park after all … Did Austen undergo a conversion to Evangelism, and thus on the grounds of religious principle dramatize the triumph of seriousness over levity, duty over desire?” Whatever your conclusion, it seems duty is a complex topic. Not so in Ever, Jane. If you follow your duty and increase the stat then you must also choose another stat to reduce (the example given on the game’s website is a reduction in happiness for duty), as if someone could never be both displeased and undutiful at once, as Fanny is in Mansfield Park. While it can be argued that videogames have some limitations as a medium that don’t allow for the complexity that can be achieved in a novel, having complex character stats is not one of them.

However, there are plans to extend Ever, Jane’s character stat system closer to its release, just not in a very Austen-like manner. Tyrer told me that eventually the game will increase your stats depending on who you invite to events. There will also be mini games that you can play to increase a stat at no cost to another. This still doesn’t allow the player to explore Austen’s complex take on the morals of her time. Instead, Tyrer has focused on including Austen’s work through narrative similarity. For example, the game opens with a funeral, just as Sense and Sensibility does. Elizabeth Bennett and Mr. Darcy are also in attendance at this funeral (it takes place before their marriage). “If you know [Austen’s] work well we’re trying to sneak in a lot of funny little things that you’ll catch,” Tyrer said. Players may be immersed in Austen’s world but they won’t get to know her opinion on it.

adopt, marry, divorce, and disown to gain loyalty or frustrate your enemies

The simplistic character stats are not the only challenge—dancing needs some attention, too. Both gathering to dance and the act itself were key social events for gentry of the Regency period. In fact, it offered one of the few outlets for young couples to touch and talk semi-privately. Famous lines between Darcy and Elizabeth in Pride and Prejudice (1813) occur around dancing, though sometimes also on occasional walks through the garden. Dancing in Ever, Jane, however, is clunky. I found myself looking away from my partner and at the ground, where I could follow instructions that appeared in the form of footsteps to follow. Tyrer told me that she also believes that looking down to the floor to the dancing instructions isn’t leading the player easily, and so they may move to an auditory cue instead. She also mentioned that they are developing “automatic dancing shoes” that will automate the process of dancing—there’s no mention of restoring a sense of intimacy to the motions, just of getting rid of the annoyance of performing it. Perhaps the dancing could be improved if players could touch hands within the game, or whisper to their dancing partner. Instead, if I want to talk during dancing, I can buy the auto-dancing shoes that free my hands up to type, or earn them through a specific quest. Otherwise, the social importance of dance is lost, and going through the motions seems pointless.

On the other hand, some of the Regency period social systems fit in perfectly within the conventions of an MMO, even making them more logical. For example, instead of conventional direct messages between players, whereby you magically speak to only one of your fellow players—though you’re in front of many—Ever, Jane offers a letter writing system. You can pen a note to your intended beau without having to worry about who is in earshot. Whenever they decide to check their letters they simply walk to their writing desk and can then compose a response. Letters were, of course, the only means of distant communication in Austen’s time, which she used to explore the theme of forbidden and impossible love in her novels. Early on, she wrote an epistolary novel, Lady Susan (1871), composed entirely of letters between the characters. The occasional letter also appears in her later works. 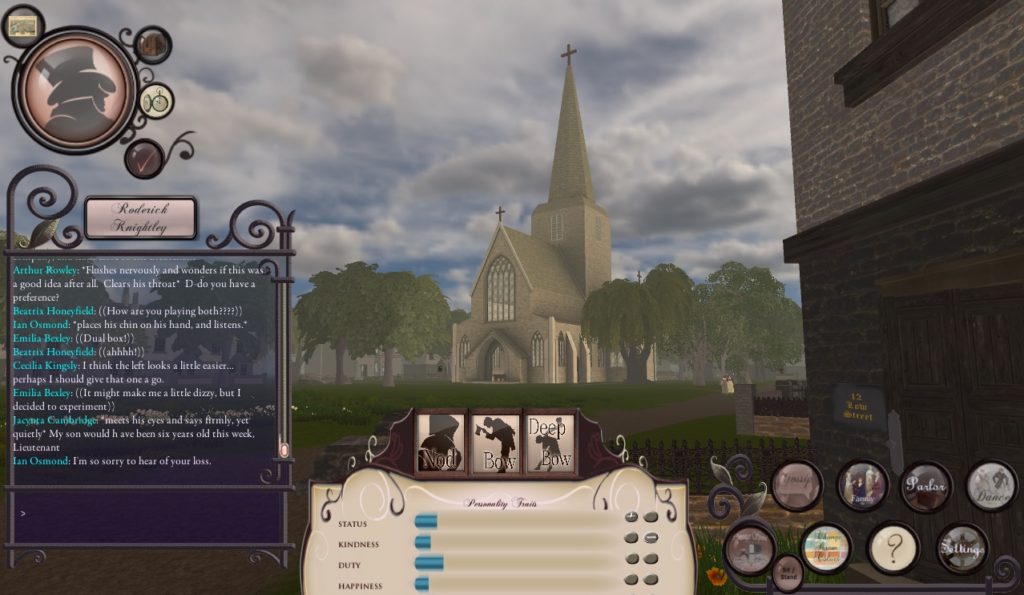 Guild systems are another MMO favorite, where players create alliances with one another. This is easily substituted in Ever, Jane for family systems. You can adopt, marry, divorce, and disown to gain loyalty or frustrate your enemies. As you do so, you’ll also have to consider your family member’s class. Although the beta version is currently free to play, eventually a character’s wealth will be determined by their subscription level—play for free and you’ll have to be a servant, or invest $25 a month to get a nifty title and some property. 3 Turn Productions has received some criticism for making a pay-to-win game, but Tryer insists that it isn’t. She also wants to allow players of all financial backgrounds to play the game. The other potential critique of this pay-in system is that it doesn’t match the social system of the period the game replicates. In Regency period England, class mobility was limited—you were born into a social class and you stayed there for your lifetime, even if you came into some unexpected money you could not normal move up the classes with it. Yet in Ever, Jane characters will be able to regularly move up and down in social class, depending on when they decide to put money into it. To be truly accurate to the time period, Ever, Jane would have to randomize the character’s birth status and hold firm limitations on it (similar to how Rust selects a character’s gender for them). On the other hand, Ever, Jane’s offering of marriages as a way to potentially change classes is a commendable effort towards accuracy. Marrying into significantly higher class families was rare, but there are cases of it.

Where Ever, Jane does manage seamless blends of Austen’s work and MMO conventions gives a sense of optimism to the project as a whole. On my most recent trip to Tyrehampton, I received an invitation from other players to join their bible study. They regularly walked down to the game’s Anglican Church and had their characters discuss the bible as those living in the time period would have understood it. There’s not much religion in the game yet, so these players must have been bringing in their own research to discuss the bible accurately. Clearly, Ever, Jane has encouraged an engagement with Regency period England that few historical games achieve with their own respective settings. Hopefully, 3 Turn Productions can add more complexity and detail to the game as it continues to blossom, especially as it concerns the material of Austen’s novels, instead of just the time period in which they take place.

Header image: Illustration by Hugh Thomson for Sense and Sensibility, via Wikimedia Commons