Header image via PixieGirl4. All others by Dead End Thrills.

Duncan Harris is the man behind Dead End Thrills, a website where he publishes what most regard as the best screenshots in videogames.

Last week we ran a piece on the controversies and debates that crop up online surrounding issues of value, authenticity, ownership when we use the term “art” by creators like Duncan. Duncan had a lot to say, and since he rarely gives interviews, we thought we’d share all of his thoughts on this fascinating intersection.

Q: Do you have a personal name for what you do?

Q: What’s the goal when you take the shots you do? What is the result you’re looking for?

A: Connect with people, surprise them. If it’s industry work then my job is to Sell The Fucking Game. If the game’s broken and impossible and simple and silly—if it’s everything the PR material says it’s not—the job’s still the same.

Q: What are the controversies surrounding the images taken by you and other creators of virtual images, from your perspective? How would you define this issue in your own words?

A: I’m not sure I’d call it a controversy, but the issue people have is with this idea of a screenshotter assuming artistic credit for other people’s work. I have an issue with that, too, which is why I don’t do it. I don’t call myself a “videogame photographer,” I don’t like that term.

I don’t call myself a “videogame photographer.”

My issue with “videogame photography” is simply that it does more harm than good. It obscures what should be a very clean and simple appreciation for the work of videogame artists; it’s the weapon of choice for drive-by clickbait articles looking to start fights; and yes, it drastically overestimates about 90 per cent of what it’s applied to. To wit: if you take a screenshot of a character model walking towards a largely static piece of scenery, however well it’s composed, you’re not an artist, you’re a tourist. And don’t get me wrong, that applies to most of the stuff on Dead End Thrills as well.

I try to stay invisible on the site as much as possible. I think my name appears in tiny letters on the index page as more of a web design credit, just as a precaution in case someone were to try and rip the site off and monetise it or something horrible. A lot of people don’t really know or care who takes the shots, and that’s fine, it means they’re focused on the games.

A: There’s something about games, this all-consuming hobby, that makes gamers want it to be a surrogate for all the things they don’t have to time to learn, excel in or really enjoy. That’s why you see games compared to books, movies, fine art, sports, photography… There’s this desperate search for validation that’s really just games trespassing on other artforms, as if to say, “Don’t worry that you never read or flunked your art degree, you can be anything if you just keep playing games.” That’s a gross generalization, obviously, but it’s the source of all the resentment when some self-professed “game photographer” pretends they’re Ansel Adams.

I’m training to be a sports photographer at the moment, and was under no illusions at the outset that I’m starting at the absolute bottom. I am an awful photographer, a rank amateur. Conversely, when some lauded photographer tries to do screenshots, guess what? They’re a rubbish screenshotter. Two very different disciplines.

Q: What do you think the future of this controversy is? Will it continue? Does the controversy matter?

A: The controversy only matters if screenshots matter. I don’t think they matter much as an artform. As a kind of photojournalism, though, a way of rewarding those games that slip under the radar or whatever, they can still be important. Again, though, it doesn’t take great skill to do that. You see it on forums all the time.

Q: Where, in your opinion, does the value of an image come from? What makes it worth being a thing that should be looked at?

A: Well, if we take that ten per cent of screenshots that are not just the “tourism” I mentioned earlier, the majority of those are still just good. So, how do you do a great one? That’s the magic. Assuming all the basics like lighting and composition are there, the great screenshot is one where the person has added something of themselves or their experience that’s not supplied by the game. That’s how you elevate the medium, or at least take people by surprise. You broaden their idea of a game.

It could be as simple as a really attractive character in Skyrim. Games seldom, if ever, really focus on the beauty of human beings; Ninja Theory is one of the few devs I can think of that clearly makes time for it, you see it in MMOs occasionally. But when someone does a character in Skyrim that isn’t just some horrid porno zombie, that’s really human and beguiling, they’re bringing something of their own to the game. Same thing if you evoke the movie a game secretly wishes it was, which is quite explicitly the goal in a lot of actual game industry screenshot work.

The great screenshot is one where the person has added something of themselves or their experience that’s not supplied by the game.

Q: How do you see what you do in the context of the history of photography, or even image creation as a whole?

A: I’d be lying if I answered this, really. It’s not something I think about.

Q: Do you have a history with photography or image creation outside of what you do with videogames? If so, what is different about doing that work from Dead End Thrills?

A: Like I said earlier, I’m no photographer—at least not yet. I have to learn to, y’know, use a camera first. My history of image creation was pretty much sabotaged from the outset by the fact I’m disastrously colour-blind and was encouraged at school, when I tried to do everything in black and white, to just stop doing art. Great, huh. I did spend a short while during my magazine years doing UX work, which I’m almost tempted to revisit. I did a few UIs for the media centre XBMC that proved quite popular and got me a lot of job offers from companies that almost instantly went bust. I guess that helped more with building the website than anything.

As far as art or photography goes—and this goes back to what I was saying about screenshotters versus photographers—the difference is really that you’re working in a controlled, artificial and technological universe with screenshots. That makes it more akin to fashion photography, I suppose, but that still doesn’t cover the understanding you need of the way games behave, the code that drives them, and what you can and can’t control.

If we take that Alien: Isolation DET series as an example. Clearly, you’d need camera control to do anything interesting with that game. Then you become aware of how developed and important the game’s camera effects are, with things like barrel distortion and depth of field going on. So, you want to control those. This is after the really basic stuff like running the game at multiple aspect ratios and super-high resolutions (8K+), but even this is just prep work. Pure environment shots are no fun. Anyone can do those.

So yes, you want the Alien, the star of the game. Most of the game’s lighting and mood exists to serve him, so what next? You’ve got to tame him, because he has an attitude problem, that one, and freeze him so you can get him posed and lit like an Alien movie might. You only ever want to see about five per cent of the Alien, but the right five per cent, so with all this in mind you crack open a debugging tool—Cheat Engine is what’s generally used—and just take the game apart. I think my Steam profile for Alien is over 100 hours, and at least half of those were spent hacking it. That’s why this has to be a hobby above all: you’ve got to love every second of it. Oh yeah, and I’ve only covered about the half the game. So it goes.

Q: Do you care about being called an artist? Is the title important to you?

A: No. It tends to appear on my paycheques, though, so I guess it’s important to whichever accounts department has to fill the payroll forms in.

Q: Have you ever had moments of doubt about what you do, any time you’ve felt the detractors had a point?

A: The detractors are neither here nor there because they’re generally objecting to the same things I do. Some people are deliberately naive about the mechanics of it—”herp derp it’s just pressing printscreen”—but how they waste their time online is up to them.

I don’t have moments of doubt, I have constant doubt. Why do I spend hours doing this? Should a father of two really bet their kids’ welfare on it? (Answer: no, which is why I have to either evolve or escape it. Luckily, I also married a doctor.) Does anyone benefit from it? Am I spending too much time hacking or building websites instead of taking screenshots? How good is the front page? I worry way too much about the order of the shots on the site, the types of shot, the variation. If I didn’t worry then Dead End Thrills wouldn’t exist, so suffice it to say it’s well and truly existing right now.

I want them to see the game and be inspired by the game, and by games.

Q: Do you have any response to the points made by detractors of what you do?

Q: What reactions from game creators have you had concerning your images? I know you’ve received some special builds; have you had any reactions other than positive?

A: Always positive. It’s free publicity, so why would it be anything else? Whether it’s sincere or just shrewd marketing is another matter. Indies really appreciate it. I guess the negative is when you do industry work and the stuff doesn’t get used. Only a certain type of game at a certain point in development really benefits from “authentic” realtime screenshots, and sometimes I end up working on projects that really should have just built their marketing materials in-editor to better represent how they’ll play at their best (and no, I’m not talking about “Ubishots” here). I’m very lucky to work regularly with Bethesda and Square Enix, though, who both really tried to understand the pros and cons of a job that kinda didn’t exist in this way before. I just wish I could work for Warner Bros, too, if only on Mad Max.

Q: When people look at your images, would you rather they see the game, the shot, some combination of the two, or something else entirely?

A: I want them to see the game and be inspired by the game, and by games. If setting a game up to look like a movie poster helps people see past all the silliness that games often suffer then great, I suppose. If they use it in presentations, lectures, essays—and it’s remarkable how often they do—then great. If it gets a game noticed that doesn’t promote itself for whatever reason, great. If it helps create a visual document of a game that helps people remember it … you get the idea. 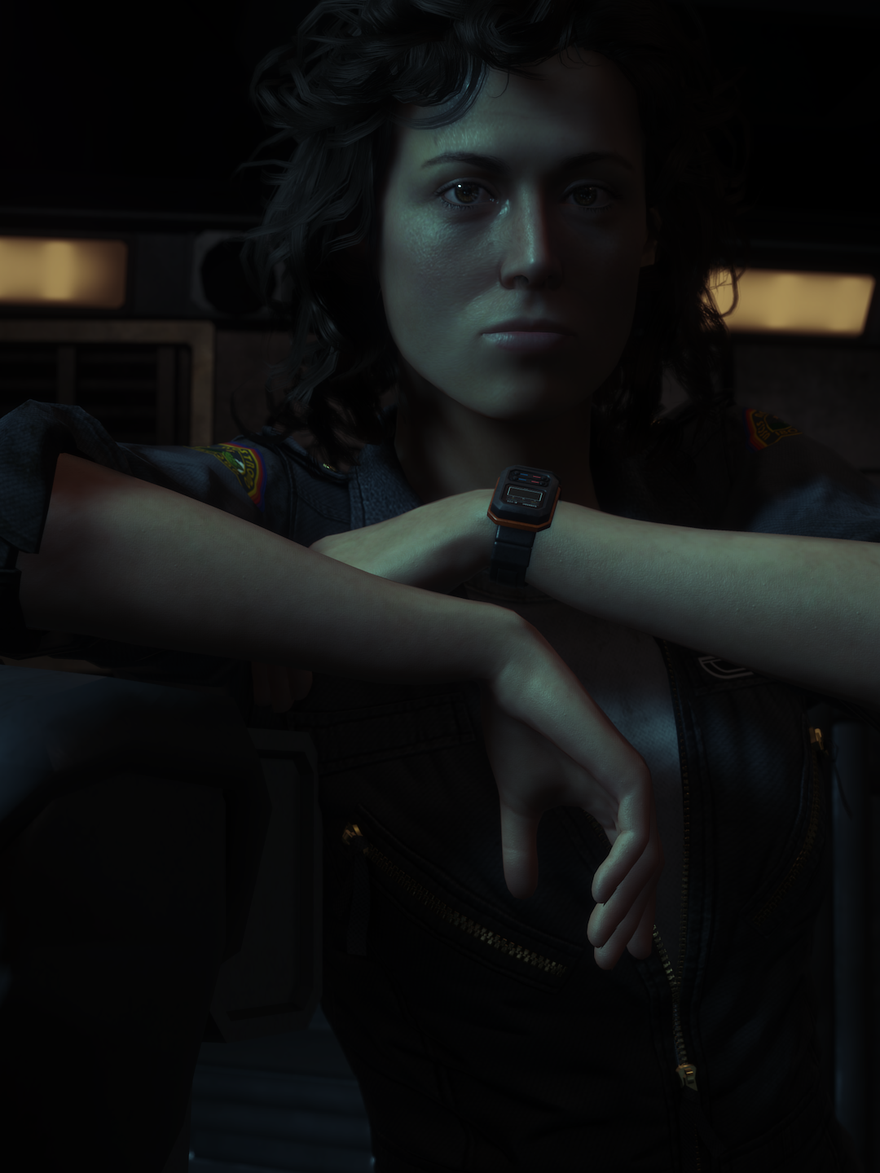