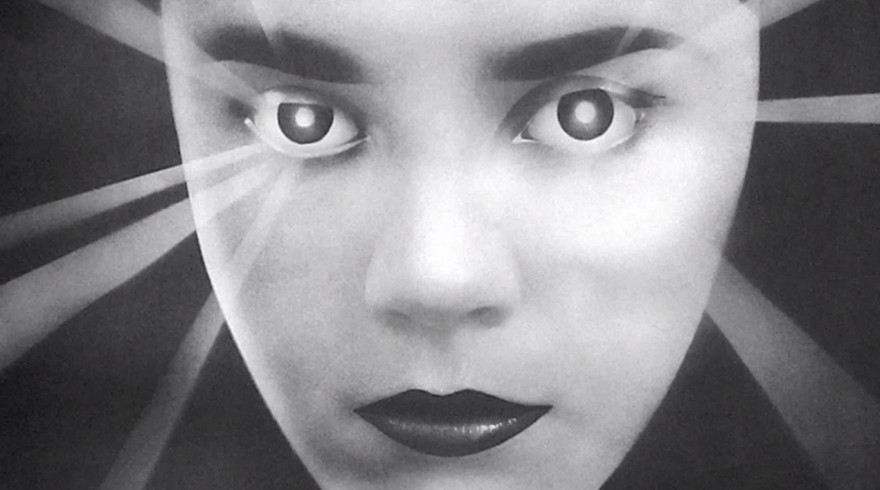 Perhaps the most remarkable aspect of Mel Croucher’s Deus Ex Machina is how unremarkable it is. Although, that’s not quite true. Created way back in 1984, it’s among the first videogames to give rise to the “is it a game?” debate, while its author asserted its position as a piece of art and an “interactive film”—two concepts that had yet to be explored at all.

When it was released 31 years ago, it came spread across two chunky cassette tapes; one containing the game code, the other its soundtrack. And this soundtrack wasn’t only a sequence of music: it was fully voiced by British icons Jon Pertwee, Ian Dury, and Frankie Howerd. So that’s Doctor Who, an influential punk rocker, and an actor whose puckered-up face was the portrait of cheeky British comedy for a time.

“I thought I’d be generating emotion.”

But Deus Ex Machina‘s format—a surreal, hour-long journey from womb to grave adapted from Shakespeare’s play “As You Like It”, about our insignificance and the impossibility of living a perfect life—isn’t anything special. It could have been if it had arrived at another time. As Rob Fearon remembers, back in the mid-’80s, Deus Ex Machina spawned when people were “still very much trying out what videogames could be.” Of course, certain tropes and trends were emerging even then, such as shooting spaceships and soldiers, and jumping across pits and racing fast cars. But this was before the time that huge companies attached their rudder to the medium to guide it towards marketable formulas to sequelize for profits. Videogames were still a new enterprise in the emerging electronic future. They were thoroughly experimental.

So Deus Ex Machina was another stitch weaved into the embroidery that videogames at the time formed as a whole. And any of these threads could have been the future of the medium, including the arthouse, semi-philosophical style that Deus Ex Machina proposed. Croucher, the game’s creator, certainly hoped that would be the case as he was disappointed by the state of videogames by that time. In 2013, Croucher told Polygon that “[b]ack in the ’70s and certainly by the time we hit the ’80s, I thought I’d be making interactive movies and doing full stories. I thought I’d be generating emotion.” Deus Ex Machina was Croucher’s way of addressing this disappointment in videogames, and was meant to found a way to further his interest in exploration (metaphysical or otherwise), rather than the destruction of the arcade games popular at the time.

Of course, Deus Ex Machina didn’t spark a trend, and despite being critically lauded (notably, videogame magazine Edge said of it that “Some day all games will be something like this”) it only managed to break even. That came down to its marked-up price necessary to include a poster and fancy packaging. It was a business decision that cued Croucher’s exit from videogames.

We’re now in a time when digital tools have been considerably democratized. This has meant that more people are able to realize their own small videogame projects. The result is a number of games that are concerned with addressing a range of emotions and forms of interaction. It’s a big difference when compared with the corporation dominated ’90s and ’00s, which meant companies such as Microsoft, Nintendo, and Sony acted as gatekeepers to the medium to an extent with their respective consoles. Now, with widespread mobile gaming and the increase in PC gaming, as well as more relaxed publishing policies on consoles, we’re enjoying a wealth of interactive experiences.

And so, Deus Ex Machina‘s 30th anniversary package arrives among all of this, containing a director’s cut with new graphics, and a re-release of the original. It slips quite seamlessly in among these other experimental games on, for example, itch.io’s store page. This is why it seems as unremarkable as it might have done 30 years ago. And, really, it’s a positive assessment to make, at least in terms of the state of videogames at these two separate moments in time. It acts as our connection between now and then, a bridge across the commodification of games that emerged in between. It exists as if a time-traveler who left the ’80s and took with them their forward-thinking ideas, to re-appear now to resurrect those same concepts at a time that they may be further explored, realized, and appreciated.

Playing it now, it’s hard to ignore how portentous and obvious Deus Ex Machina’s messages feel. This isn’t a negative take, as its familiarity to us now shows how ahead of the curve it was back in 1984. It adapts the videogame convention of having multiple retries into a reflection on the preciousness of our finite mortality (“Your life is expressed as a percentage score.”). It’s similar in its stance to how the game notorious for only letting you play it once, One Chance, is modeled, and that wasn’t released until 2010.

Likewise, the way it stands so explicitly against the idea of enjoying violence in videogames is reflected in flawed form in the punch-drunk inversion of player-led violence in Hotline Miami, and its ilk (Spec Ops: The Line being the oft-cited example). And its musings on the mechanical body and machines disobeying those who created them has flashes of the brilliance seen in many a cyberpunk fiction. Yet it arrived before a lot of the sci-fi sub-genre really took off in popular media, with Neuromancer, Blade Runner, and Ghost in the Shell.

If nothing else, Deus Ex Machina is a forerunner that exists to remind us that, actually, many of the supposed new ideas emerging these days are but ghosts of what has come before. Unfortunately, and this is the tragic part, the way of tech-based and entrepreneurial industries is to move forward and forget the past. This is why, for the most part, Deus Ex Machina has been forgotten. Perhaps before we can truly have any progression in the videogame space, then, we need to get better preserving its history and celebrating its more experimental works.

You can purchase Deus Ex Machina on itch.io, the App Store for iOS, and Amazon for Android.