The hero of Pillars of Eternity is plagued by memories of his past lives, which is not as rare a condition as you’d think. He (or she) lives in a world of circulating souls that reincarnate as a matter of course, though they also tend to be stolen or eaten or lost on their way through the cosmic post. He begins to have visions of previous lifetimes, learns he can leaf through the minds and pasts of those around him, and starts to think he’s going crazy. The weight of history seems to be too much for anyone to bear.

But his heroic suffering reflects a common truth. Every RPG player explores spaces resonant with memory, full of labyrinths and gods and deeds reminiscent of one’s earlier days as a divine by-blow in Baldur’s Gate, as a vault dweller hunting a water chip, as a caravan guard, the survivor of a zeppelin crash, or a thousand kinds of adventurer. Everywhere you look in Pillars you find echoes of other lives in other games: the hero piecing together his memory recalls Planescape: Torment, the party’s stronghold Caed Nua calls back to Crossroad Keep, and the massive dungeon below it will be measured against Watcher’s Keep. We look down from the three-quarters perspective of the Infinity Engine onto a world recreated in its image, with the old selection circles, picture-frame cutscenes, and character portraits filling with blood. Both the broad and fine strokes pull us back into the past.

Pillars of Eternity‘s great trick is to shoulder all this history without being crushed by it, as the hero of the game fears he will be. The trappings of the Infinity Engine have been refined by designers who respect our memory of the old games too much to remind us of the unpleasant realities. The stiff group movements of yesterday’s parties have become fluid and attentive to custom formations. Shaded drop zones now help wizards aim area spells that won’t blind or incinerate their friends. A “Fast Mode” lets you hurry back through cleared rooms to reach shortcuts that lead out to the dungeon entrance, and some nimble code allows characters to jump to the next area before actually touching the edge of the screen. It’s a big world, but your party shoots through it like an arrow.

They step into dungeons full of floating dust and living detail. The game’s artists have a special love for faces, and the wallet-size portraits on the UI are often dwarfed by the ones chiseled into stone walls and archways or carved from sheets of luminescent rock. The best of the game’s hand-made environments (apparently pre-rendered in 3D and then retouched) are rich with human invention: an eroded archway stooping over a village entrance, unscuffed mosaic floors in buried halls, and freestanding machine towers left by an ancient race. You can believe that each landmark has a story behind it, and forget it exists only to be part of yours. Every place has a personality, and many of them have faces.

there are other explorers and deeper pasts below

If Pillars was remembered for nothing else, we’d still talk about how it gave us the Endless Paths of Od Nua, a fifteen-level dungeon built around the giant buried figure of a man—but saying who the monument is modeled after, and why it was made, would be telling. His great fingertips break the surface of the ground above, but you don’t see his green-and-gold face until you’ve walked through four levels of ghosts and slime. By the time you cross the palm of his lowered left hand, somewhere on the eighth floor, both the statue and the place have come into focus as products of human obsession. The designers could not have said more clearly: our world is built around people.

Walking the Endless Paths is a descent through history. The same should be true of many game dungeons, but they’re rarely better than public housing for skeletons. In Pillars of Eternity, your journeys are driven by real curiosity, and many of the floors you map tell their own stories. You chart your depth at first by following signs of an older doomed expedition, and passing the last of their corpses feels like stepping onto a new planet. But there are other explorers and deeper pasts below. No matter how far you go, you find mordant reminders of the failures common to all of the game’s societies. At one point, you learn that an entire undead social order has collapsed due to a persistent termite problem.

Pillars is sharp like that, inside or outside Od Nua’s mazes. (The Endless Paths are an optional area, albeit one that got a great deal of designer attention.) The game isn’t a dark fantasy only because it’s set in a country where babies are being born without souls, or because its inhabitants seem to have killed one of their own gods with a bomb. What sticks in your mind is its creeping pessimism, the suggestion that bad circumstances always lead to worse solutions. 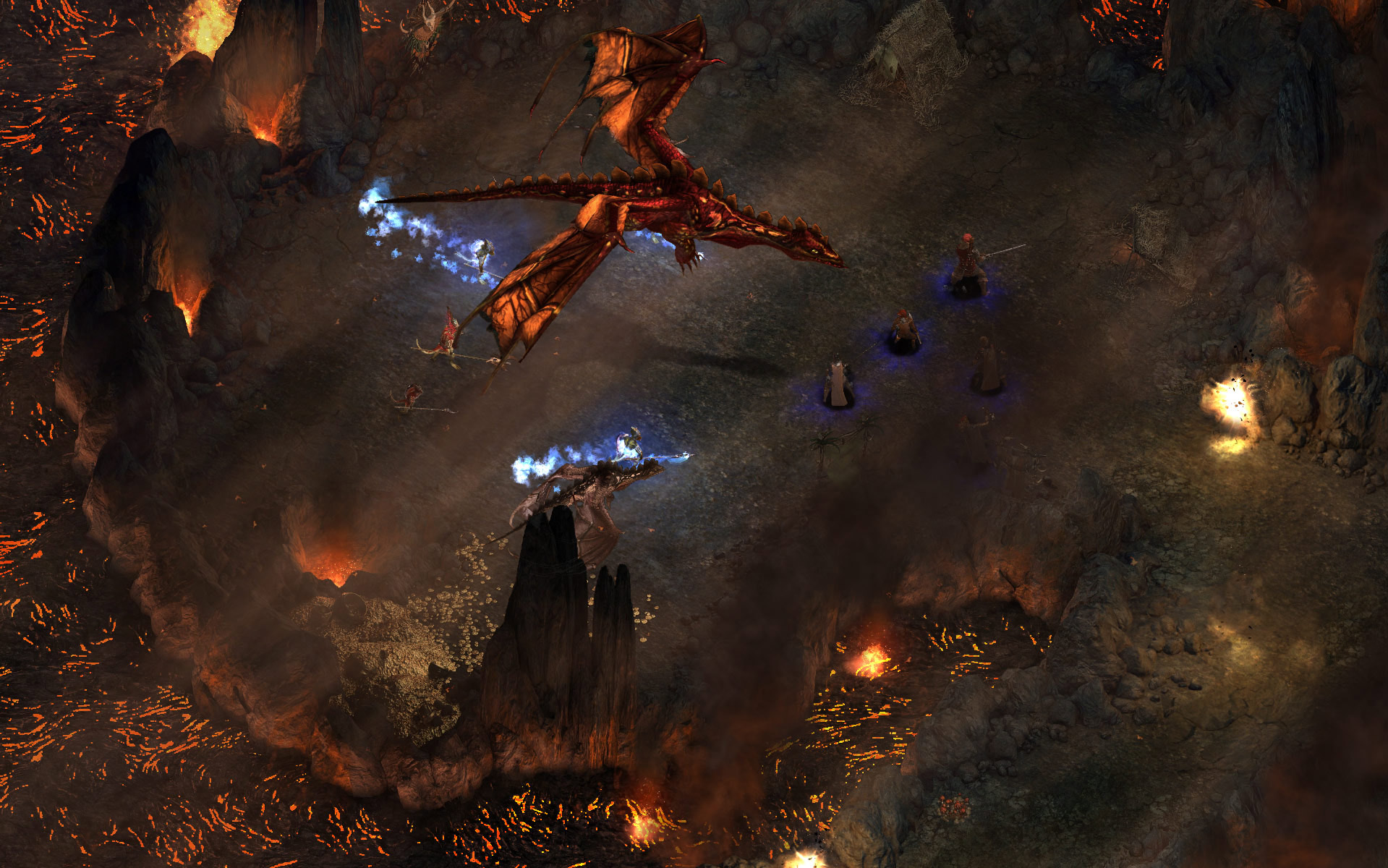 We’re told that the kingdom’s animancers, a group of ivory tower soul-alchemists, once tried to transplant animal souls into the infants born without their own. Your party sometimes comes across packs of the feral “wichts” the kids turned into. One of the game’s great scenes only happens if you stop to talk to a staff member at a sanitarium, a former proponent of this theory, then decide to steal from the large locked chest in his office. If you do, you discover he kept one of his former research subjects trapped half-alive inside. The game shows you an inky picture of the bestial form crawling from the scientist’s trunk—like, lingers on a Scary Stories to Tell in the Dark-style illustration—before you return to the isometric view and watch the creature rip its maker apart.  That’s part of what anchors the game’s vision of history: the details are convincingly nasty. The hero’s companions all set out looking for answers, but they never seem to like what they find. As the story goes on, the protagonist faces ever more distressing revelations about his own past and the foundations of his understanding. The truth sets nobody free.

The truth sets nobody free

If there’s a major problem with Pillars of Eternity—other than the Confuse spell making combat trivial even on Hard—it’s that it ends in a rush, covering its exit by throwing out some limp questions about whether knowledge is worth anything, anyway. After hours of build-up, the villain looks smaller-than-life in his pivotal scene. And coming after such a grand and leisurely adventure, the truncated endgame feels like a final chapter read to you at double speed before the book is slammed shut in your face.

Like Arcanum and Vampire: The Masquerade—Bloodlines before it, Pillars of Eternity is a feat of world-building. Its supporting cast, led by the haunted Grieving Mother and the blowhard priest Durance, is one of the genre’s strongest. It introduces both ancient and personal mysteries and then gives us answers, in time, that are neither obvious nor inconsistent. The slight sourness of the ending comes in part from its implication that knowledge itself is little help in making the big calls, which come down to matters of faith. It may be a viable epistemological view, but it feels like an overreach in a game otherwise full of the satisfaction of uncovering the past. Piecing together the terrible history of its world was most of the fun.

The worst I could say about Pillars of Eternity is that, after beating it, I didn’t immediately think of playing through again. It’s a little too good at stirring up memories of those other vast, wooly games that you never seem to finish completely. It feels like a good day to start over in Amn. Maybe this time, I’ll finally see the end of Watcher’s Keep.