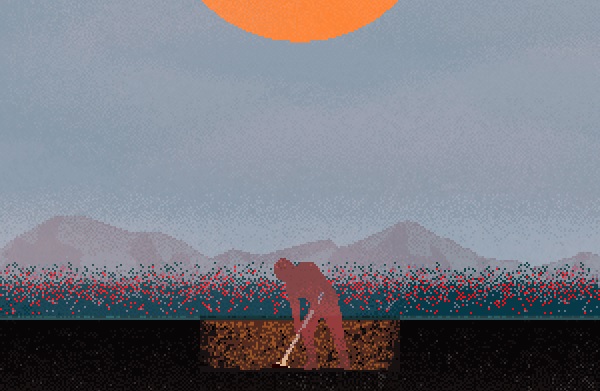 A faceless figure stands in a field. The shovel tight in grip, its body rises up and down in exhaustion. It lifts the shovel, attempting to dig a hole beneath its feet. The figure is successful and sinks slowly into the earth. But then it fails: the loud ding of the shovel hitting the hard ground rings out. The shovel didn’t cut the soil quite right, not this time, at least. The sun quickly sets behind them, promising only to bury this figure in darkness… and then what? Such is the brief, bite-sized browser-based project DYG; an aesthetically pleasing game of “labor in the field,” as the description suggests.

DYG is simple, morbid, and serene

Artist Burgess Voshell is relatively new to the videogame development scene. In early 2015, he developed the “crush or be crushed” competitive game HEAVY PILLAR. A simple goal radiating in its action: jump around and knock over the heavy pillar. This is how you destroy your equally chaotically bouncy opponent under the monolithic block and ensure your own survival. With DYG, Voshell once more opts for simplicity, but this time finding a more meaningful, subtle message under the surface.

There are no opponents. Just the setting sun quickly diminishing the light of the day and a trusty shovel as your tool. At first, you dig, but you don’t know why. Are you a farmer tending your land? Perhaps you’ve been forced into slavery and dig with a rifle watching your back. The context isn’t revealed. And in the end it doesn’t matter. The title, DYG, it turns out, stands for “Dig Your Grave.” And so what does matter is how far you have dug: either your hole becomes a shallow grave that leaves your corpse open to a hungry vulture, or it’s a deeper one lets you rest in peace with only a gravestone to tell of your existence. You work for your own dignity in death.

It is perhaps unsurprising that Voshell manages to get so much out of a couple of key presses as DYG was created for a class taught by QWOP creator Bennett Foddy at NYU Game Center—QWOP, of course, notable for its dastardly four-button challenge. But DYG is more than simple. It is simultaneously morbid and serene. The lo-fi art is reminiscent of other similarly uncomplicated games, like the colorful environments of Proteus, the bleak space station of Another World, the frenetic neon blood stained arenas of Nidhogg, though DYG is more nuanced than these. The environment never changes, only the light itself as the sun sets. You don’t move, you stay in one place, racing the waning sun, and just dig, dig, dig your way to death. It’s a micro game-essay on the dichotomy of living and dying.

Play DYG for free in your browser here (Chrome or Safari are recommended).