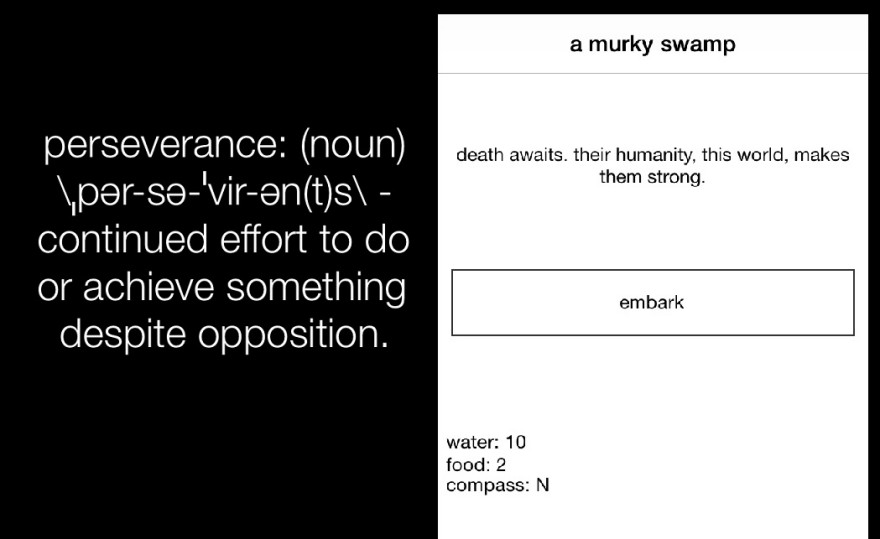 For his latest game, The Ensign, Amir Rajan has pulled the grisly face of Bandai Namco’s million dollar marketing budget for Dark Souls II over his head when saying “Best of luck to whoever attempts this game. I imagine few will succeed in completing all of it.”

After releasing the critically acclaimed incremental discovery game A Dark Room (also on iOS), Rajan was inspired to make a “brutally difficult” prequel based on the Dusty Path portion of the game—the part he loved playing the most.

“I wanted to make a strategy game that had high replay value, as opposed to a game about discovery,” Rajan states in the description of The Ensign.

“Now the real journey begins,” it tells me in blood red lettering after a dozen deaths

It’s a statement of intent that doesn’t quite match the end result. The Ensign‘s understanding of “strategy” isn’t the macro-scale unit management that defines the genre. Rather, it has a much more refined Soulsian taste (you start off by drinking swamp water), focusing on the micromanagement of a single adventurer on their way to a distant starship to call in reinforcements.

Looting dead bodies is a game of weight loss as you trade extra food rations so you can carry the sharp blade of a steel sword. Each step you take costs one unit of water, always threatening a death by dehydration if you stray too far. With such delicate measurements death comes aplenty, and each time a lesson is learned: it teaches you to fight with both ferocity and caution against even the weakest enemies, to refill your canteen regularly, and to trust in your compass to find the way. But it’s not quite permadeath that entwines you, as when you do die a time paradox resets you, meaning that just like in Lordran, “the flow of time is distorted” in The Ensign.

I’ve been straining every muscle against the ropes that bind me, telling me not to make the clichéd comparison to Dark Souls, but The Ensign keeps mounting the evidence. “Now the real journey begins,” it tells me in blood red lettering after a dozen deaths, mimicking a semi-serious joke left as notes all across Drangleic.

It also toys with and tests your resolve just as Dark Souls does. As you grow comfortable battling the same angry townsfolk, cleaning out the same beast’s den, The Ensign seizes the opportunity to cruelly throw you off balance. A dangerous occultist “defector” that easily slaughtered me after I had triggered his arrival doesn’t go away; he now chases me from the beginning of each restart. However, just as I learned in Dark Souls, I’ve found a way to deal with him so that he’s just another part of the splintering fray enshrouding me.

Despite what Rajan says, The Ensign is also a game of discovery—this is clearest when exploring the ASCII-based map steadily, a step at a time, praying for an abandoned house to relieve your struggle. The difference between it and A Dark Room is that it’s marked by two of the core tenets of a Souls game: solitude and desperation.

Weapons are found, run down against tough hides, and then discarded. You upgrade your bodily capabilities by appeasing a mystic, and offering them eyes, teeth, and flesh. The definition of the word “grit” greets you when restarting, encouraging you to bite down even harder on the bit. It’s a game of diabolic rituals, of juggling the encumbrance of a fated journey, of imperative commands and intimidating forewarning; “Death awaits” croaks your pathetic admiral each time you embark, and he’s always right.

It’s no use denying it: The Ensign is every bit a Souls game as a text-based adventure could ever hope to be.

You can purchase The Ensign for $0.99 on the App Store.