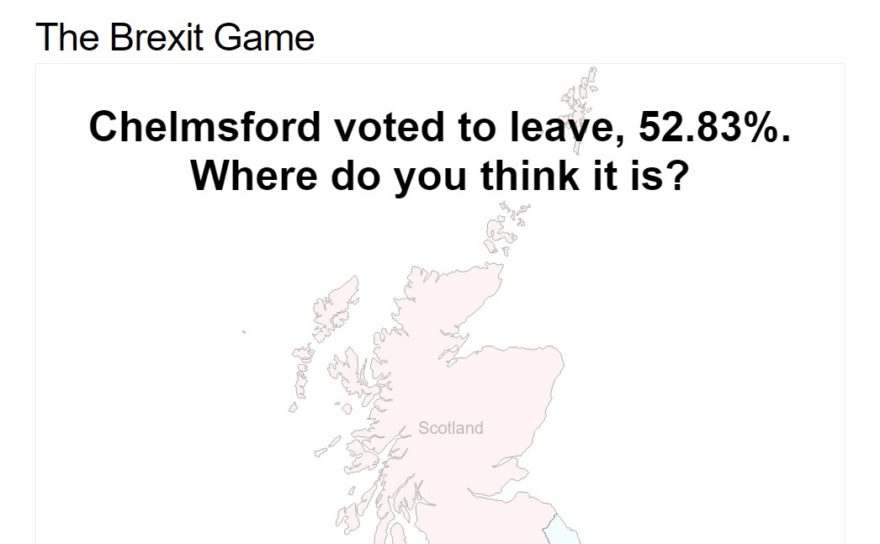 We have reached the recriminations stage of the United Kingdom’s referendum on continued European Union membership. One might reasonably argue that the whole campaign has taken place in this stage from the start—recrimination is Brexit’s natural state of being.

But, in short: everyone’s mad; everyone’s an idiot; everything’s fucked up.

Here, then, is Toph Tucker’s The Brexit Game, which is not very good but captures the zeitgeist reasonably well. It is basically an excuse to call other people idiots. The game was coded at a bar and gives you the name of a place in the United Kingdom and the percentage of its voters who favored Remain or Leave, then challenges you to place it on a map. If you’re too far off the mark, it says “you have no clue” in a large typeface.

Most of us don’t have a clue, but where do we go from there? You’ll hear plenty about ignoring referendum results or letting younger people vote. Someone you know will talk about a knowledge test for voting, as if that would fix a broken polity. None of these is a brilliant idea—some of them are outright bad—but it’s not like there’s a good idea kicking around. The least godawful idea will soon look very good. “The trouble with committing political suicide,” as Winston Churchill once noted, “is that you live to regret it.”

How did we get here? In part, it’s a product of bad game design. A referendum in which a significant portion of voters believes its votes are not binding is fundamentally flawed. (Then again, this sort of problem is not unprecedented. The European Union’s Maastricht Treaty, for instance, was only passed after a number of failed referenda. You can’t entirely blame voters for expecting history to repeat itself, as it may well yet depending on the willingness of future prime ministers to invoke Article 50.) But try to imagine a game where an action is supposed to have a concrete consequence but a plurality of players believe it doesn’t, and then… maybe it doesn’t? This is not a workable system, but it is where we now find ourselves.


This is, to be clear, not solely a design problem: xenophobic and violent incidents have risen in recent days; an MP is dead; economic losses are mounting; the United Kingdom is more of a suggestion than a political or geographic reality going forward. Those are all tangible realities. But the design problems still haunt. The idea of “ever closer union” is not just a motto for European Integration but also a structural content; it’s supposed to get harder to reverse the Union’s ‘progress’ with time. There will probably be more referenda now—if not in the United Kingdom then elsewhere. The rules of the game are a bit clearer now—a referendum isn’t just an empty expression of anger—but not so much so that it’s clear where we go next. What could possibly go wrong?

You can play The Brexit Game in your browser.