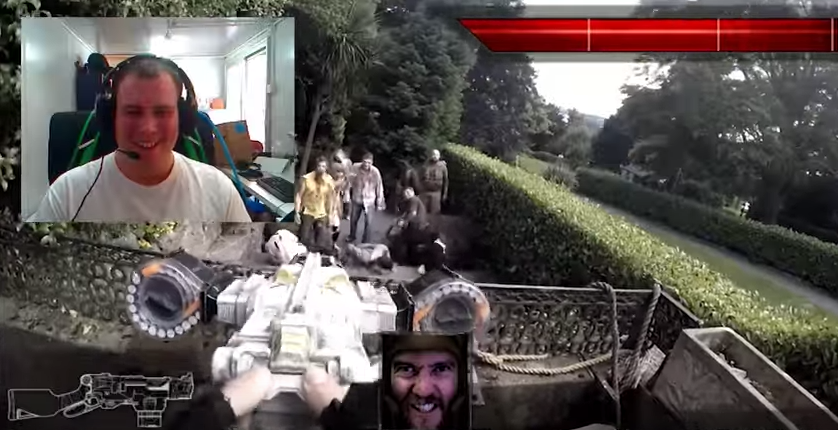 The setup is familiar: A player is dropped into a gameworld and explores it through their avatar’s point of view. This world, it turns out, is filled with zombies and the player must kill those from whom you cannot run away. Along the way they can pick up weapons that might be of use. Should their health meter hit zero, they die. Game over. It’s all quite typical, really. Or, rather, it would be quite typical if the player’s avatar weren’t an actor with a camera on his head being controlled by the oral commands of random Chatroulette users as he traverses a world populated by actors and props.

This setup works because it is familiar. “Real Life First Person Shooters” painstakingly follows the formal conventions of the first-person shooter genre. In and of itself, this dedication is fascinating to watch. But it’s also why the gameplay appears to work (though the clips released are obviously selective and edited). A random Chatroulette user dropped into this game can understand how it works. Sure, there are real humans instead of 3D models, but the underlying visual language is fundamentally the same. It’s the game you know and possibly love, albeit with a different, real skin.

The secret charm “Real Life First Person Shooters” comes from its use of vocal inputs instead of the normal tactile controller. The avatar keeps asking the player “what should I do?” and players respond in something resembling full sentences. Their responses contain bits of doubt and uncertainty. Traditional controllers inputs flatten this emotional range: A pressed button is a pressed button is a pressed button. But Realm Pictures’ gameplay footage reveals how gamers might behave in a world with far less technological intermediation. Of course they’d still play games, but the mechanics for expressing certainty or the lack thereof would be different.