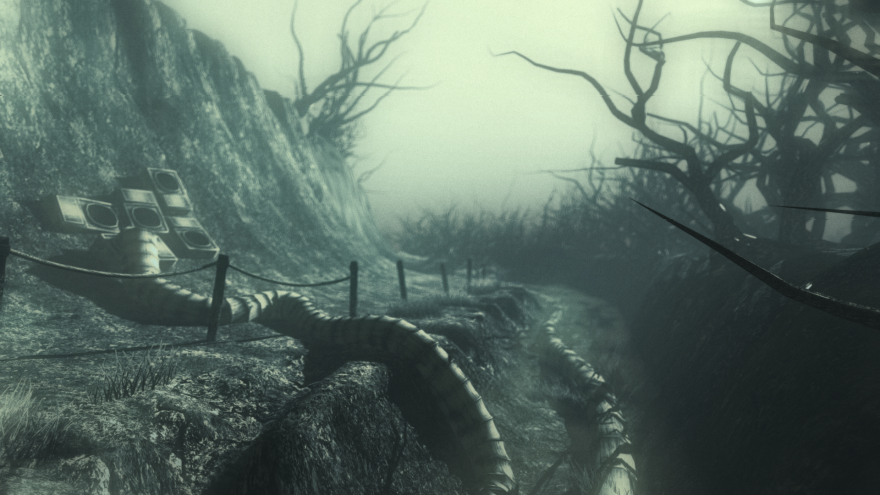 That’s how Andalusian Games describes its upcoming game Tangiers, a reality-bending horror-stealth hybrid rooted in the violence and absurdism of 20th century avant-garde artists, and set to a reactive soundtrack of thickly-textured noise and muted industrial beats.

It’s coming to Steam, itch.io, and more on November 26th and you can see its new trailer below.

Along with this new video, Andalusian Games has also posted artifacts EP, a free set of tracks created with the same procedural music generation that will be used in Tangiers. It’s dark ambient meets Throbbing Gristle and I’m sad there isn’t more of it.

Music won’t be the only reactive element at play. With a text-stealing mechanism that lets you nab bits of dialogue from unsuspecting foes, words become weapons in the world of Tangiers.

The ability to make your own meaning in the game’s bizarre, dystopic setting—where entities with cassette tape heads stalk the alleys and a highway shattering to pieces in slow-motion may be a common sight—ties into the team’s desire to have a conversation with the players through a videogame experience.

“Using the game as the means of communication, let’s talk our fears and fancies; our anxiety and life experiences; our observation and sense of humour,” says project lead Alex Harvey.

Tangiers enters into a limited beta on September 3rd. Until then, put on that free EP and check out our interview with Harvey from last year.