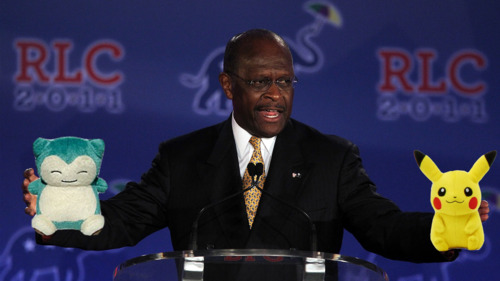 In a move that encapsulates the eccentric candidate, Herman Cain decided to quote Pokemon in his speech Thursday when announcing that he was stepping down as a republican candidate.

“I believe these words came from the Pokémon movie,” Cain said during a speech in Atlanta. “Life can be a challenge. Life can seem impossible. It’s never easy when there’s so much on the line. But you and I can make a difference. There’s a mission just for you and me….Just look inside and you will find just what you can do.

According to Kotaku, the line comes from the Donna Summer song called “The Power of One” that was in Pokémon: The Movie 2000. Cain dropped out of the race after allegations of sexual harassment and an extra-marital affair came out. A shame that we never got the chance to find out whether his was SUPER EFFECTIVE against the democrats.