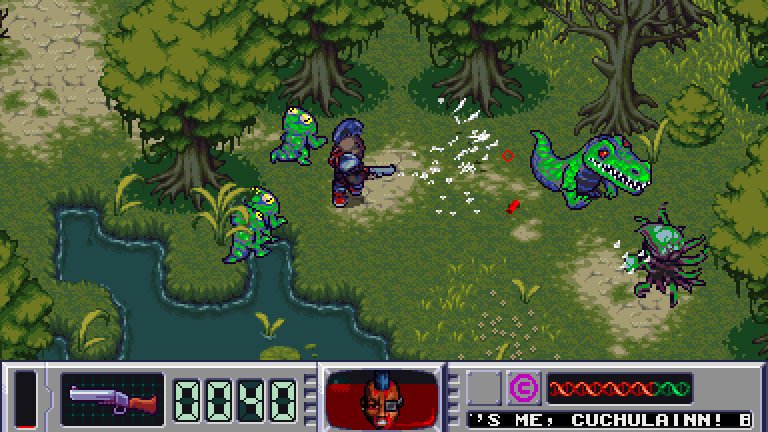 It all started with a Wikipedia entry.

One day in 2006, Liam Raum, Brian Raum, Eric Shumaker, and Jesse Ceranowicz were reading the free encyclopedia’s entry for His Airness, Michael Jordan. Somewhere after his stint with the Chicago White Sox but before he joined the Washington Wizards, there was a paragraph about one of Air Jordan’s indelible marks on the ’90s ethos, Space Jam. And, in that paragraph, there was one sentence that led to the creation of what the developers claim to be the single largest universe this side of Star Wars: The Hoopz Barkley SaGa.

“The Wikipedia article talked about how Michael Jordan was in the movie Space Jam,” Brian explained, “and there was this line that was like, ‘Some fans argue whether or not this was canon.’” There was a pause here, an appreciation of the strange realm that celebrities like Jordan occupy between fiction and reality. “Like, was Space Jam canon to his life? Or to Looney Tunes? We didn’t know.”

So, in response to the question one Wikipedian had unintentionally posed, Tales of Game’s Corp. Corp. got to work, and released Barkley, Shut Up and Jam: Gaiden in 2008, a sequel to both Charles Barkley Shut Up and Jam and Space Jam.

But there was a catch. “I hadn’t played Charles Barkley: Shut Up and Jam,” Eric confessed. “And I still haven’t played it. I was just browsing the internet one day, as one does, and I saw the title, and this name popped into my head: Charles Barkley Shut Up and Jam Gaiden. That name was bizarre. And I knew immediately that this game was about Space Jam.”

It is a new world cut from Space Jam’s venerable cloth.

As the team mulled over the name, a canon was born: An anti-athletic totalitarian post-apocalypse. The scene? Neo New York, a cybernetic nightmare where basketball was outlawed after Charles Barkley performed the world’s first Chaos Dunk, a b-ball move so powerful it killed millions, ostracizing ballers everywhere. Hiding from retribution, Larry Bird became a priest. Vince Carter, long since buried during the Great Basketball Purge, was reborn as a cyborg. Under duress, Michael Jordan became a government crony enforcing the B-Ball Confiscation Act. There are shadowy organizations with shadowy-sounding acronyms (B.L.O.O.D.M.O.S.E.S.), a currency called Neo Shekels, weapons called Zaubers, medkits called EctoCoolers, a hero whose reality flashes back to the sunny preapocalypse. It is a new world cut from Space Jam’s venerable cloth.

The whole Barkley canon rapidly became a love letter to and a satire of role-playing games, like an early Final Fantasy crossbred with KAZAAM. Its satire is at its best when it makes you see yourself in it, as in the Truck Pump, a combination NPC and save point in Barkley who comes off as something between a forum fanboy and a videogame (or “vidcon,” as they’re known in the Barkley canon) evangelist.

As Hoopz Barkley puts it, “When you gaze into the abyss, the abyss also gazes into you.” That’s how The Barkley SaGa works: You see yourself and you have to laugh.

Thing is, it’s hard to give a good elevator pitch for a universe that’s got this much happening in it. So, when somebody corners Tales of Game’s about what Barkley is, they explain the game’s true purpose instead: “We were at MagFest, and we had to give an elevator pitch as a part of a panel. All the indie games went up and said, ‘My game is a brawler,’ ‘My game is a match-three with zombies and vampires…’ So we just got up and decided to pitch an idea about laying dominoes in a long line from Key West to Vancouver, Canada. Dominoes Across America. It would take 56 days to get from Key West to Vancouver with all these volunteers who are going to watch the dominoes and do stuff like build tunnels in Kansas because tornadoes would hit. We pitched this huge, fully thought-out plan to lay dominoes down. Barkley is just a stepping stone for our true dream: Hands Across America mixed with a complete waste of money.”

As Hoopz Barkley puts it, “When you gaze into the abyss, the abyss also gazes into you.”

Tales of Game’s appropriate and parody in order to create canon. They’ve built games for themselves that also resonate with those of us who remember what a weird, wonderful, time of xtremes the 90s were. And they do it with canonical responsiveness that syncs up perfectly with the game itself.

“One of the very first times that we ever discussed the entire Barkley story and tried to make some sense of it was, like, last week,” Liam pointed out. While the story and the general arc have been in place since 2006, the minute-to-minute happenings of the Barkley universe are somewhat determined by the development process, by the player, and by what happens as bits and pieces of the game make their way out into the world. Barkley canon gets written in forward motion: “You can’t go back after canon is established… Once it’s there, it always has been and always will be.”

Liam usually tells this story to explain canonization: Tales of Game’s went to Awesome Games Done Quick when one of the speedrunners was doing Barkley 1. In their game, there’s an enemy called a duergar lifted more or less out of D&D lore with a little bit of Spalding branding and a sick jumpshot. When asked at AGDQ how to pronounce “duergar,” one of the Tales of Game’s programmers “had the foresight to shout out Durr-gurr!, and now we’ve kept it as canon. The mispronunciation stays.” In fact, canonically speaking, the mispronunciation was the first time duergar was ever pronounced correctly. Durr-gurr is—and always has been—Barkley canon. “No retcons,” says Brian. Eric backs him up: “No reneging on promises we make.”

While Barkley 1 helped build the canon, Barkley 2 makes canon-building a mechanic. Brian, one of the designers, explains that “there is one path that I would suggest a Barkley 2 player follow: their heart.” Unlike the first game, Barkley 2 allows the player a wide variety of choices that let them write the version of the Barkley SaGa they want to play. The game leverages cliche after cliche—amnesia, revenge mythos, sci-fi/basketball tropes and types—in order to make the player feel that what’s happening is “almost predestined…like you automatically know what’s going to happen.” The difference is, “We want to present it in such a way that any choice you make feels as legitimate as any other choice…You do what your impulse tells you. And that’s as canon as any other option.”

As the developers put it, Barkley “is a reflection of the inherent bizarreness of some of the cultural artifacts of the 1990s.” But it’s also strangely representative of the contemporary zeitgeist: a niche game a group friends made to make one another laugh that found an audience of more than 4,000 Kickstarter backers.

When it comes out later this year, The Magical Realms of Tír na nÓg: Escape from Necron 7 – Revenge of Cuchulainn: The Official Game of the Movie – Chapter 2 of the Hoopz Barkley SaGa will have answered the question posed by a 2006 edit to Michael Jordan’s Wikipedia page: Space Jam was canon.