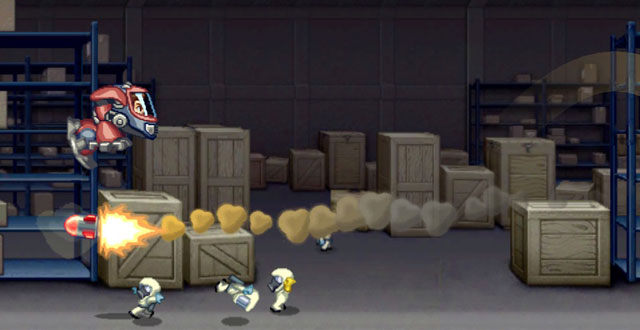 I have been trying to write the introduction to this review for about two days now. After typing and deleting about 17 opening sentences, I decide I need some inspiration: I pick up my iPhone, launch Jetpack Joyride, and tell myself I’ll play a couple games and write whatever is fresh in my mind.

You know how this story ends: whenever I launch that game, I can’t bring myself to put it down for pretty much the rest of my night. I move from my desk to my couch to play some Deus Ex: Human Revolution, which I do for about 30 minutes. I pause the game and find myself playing Jetpack Joyride in front of my paused Xbox 360 for about an hour. I go to the kitchen, wash about five dishes, and then retreat to the bed with Jetpack Joyride already loading up. I’ll play a few more games before I go to sleep. Two hours later, and well past bedtime, I’m falling asleep with an iPhone in my hand.

About a year ago, I swore off endless games, convinced that I only needed so many games that went on forever. But Jetpack Joyride has certain hooks, not least of which is its absurd premise. Action hero Barry Steakfries has burst suddenly through the wall of a science lab and stolen a jetpack that propels him upward with machine-gun bullets. The gameplay mechanic is based on the classic Helicopter Game, where the player presses a button to make the aircraft rise and releases it to descend, avoiding obstacles as long as possible. Halfbrick’s variation feels like playing a Saturday morning cartoon by Michael Bay—one long action scene with increasing close calls and randomly generated climaxes.

The haphazard details sell the action. Your primary goal is survival, but the rewarding byproduct is a cartoonish and satisfying tour of destruction. Scientists run desperately for their lives, tripping over one another, only to collide face-first into an electrical barrier. When they feel as if all hope is lost, they curl up into a fetal position. The most comically brutal moments occur as you’re controlling one of the vehicles you find. Scientists are tossed aside by the giant jumping mech; they’re shot to pieces as you ride your motorcycle through the lab with shotgun in hand; and so on.

Meanwhile, we’re treated to an exhaustive tour of an unbelievably large scientific facility, complete with warehouse, aquarium, and testing facilities. These simple backgrounds are more than window dressing. They also provide a sense of the laboratory’s hugeness, the overspending necessary to create such a place, and the wastefulness of investing personnel and tools to create things like machine gun jetpacks.

It’s less about emulating Canabalt‘s sense of panic and more about destructive play, like being able to build a giant tower of blocks with the press of a button and spend minutes tearing it down in elaborate, satisfying ways.

In fact, all of these aspects contribute to giving this world, which is inhabited so briefly, a living quality. Just as Canabalt broke new ground in providing a startlingly resonant reason to run to the right, Jetpack Joyride sets a new standard for the sort of dynamic world that an endless running game can portray. It’s less about emulating Canabalt‘s sense of panic and more about destructive play, like being able to build a giant tower of blocks with the press of a button and spend minutes tearing it down in elaborate, satisfying ways. The player doesn’t simply react to the world; the world reacts to the player in myriad ways.

The built-in mission system is familiar but perfectly implemented—guiding us to discover the more satisfying ways of destructive escape, in exchange for coins and more objectives. By directing our focus from going the distance, to coin gathering, to interaction with the scientists, to taking premeditated risks, Jetpack Joyride sets the stage for our mind to conjure up myriad stories within one setting and one ludicrous event. Still more absurd and noteworthy circumstances are made possible by an end-of-game slot machine that opens the possibility of player resurrection, a giant bomb that blows the player even further in the level, or more tokens for the slot machine. Even the jetpack itself doles out a twisted sort of justice as the scientists dash underneath and meet with its bullets. Unlike simpler endless runners, one thing is for sure: you will not forget the story of your high-score run.

Many action directors only wish we could be as invested in their films as I am in this simple, extraordinary science-lab heist. Cinema comes with gravitas and expectation. The audience waits in silence to be impressed, wowed, and profoundly moved. The iPhone screen, though, is made for distraction. We expect little from the iPhone except to be briefly entertained—which is why Barry Steakfries, and his psychopathic determination to steal a jetpack at all cost, surprises and delights us: he gives us a chance to create our own ludicrous story.