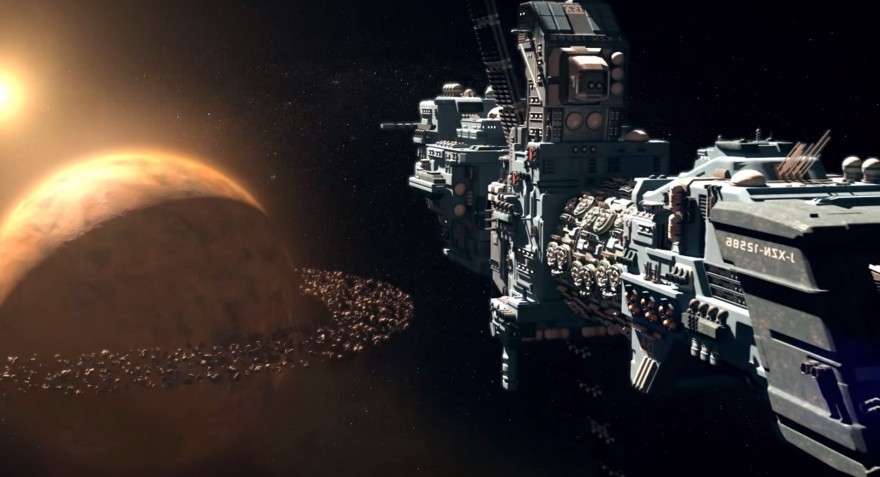 At first glance, J.U.L.I.A.: Among the Stars seems like a culmination of science fiction that came before it. Its story is a little bit of Alien, some System Shock 2, and a dash of Mass Effect, along with a soundtrack indicative of Firefly. It’s hard to boot up the game for the first time and not see these similarities, especially in a genre full of iconic staples. But these reference points are almost a cover-up for the game’s surprising, actual appeal.

These reference points almost cover up the game’s surprising appeal.

J.U.L.I.A.: Among the Stars is a from-scratch remake to the 2012 title J.U.L.I.A.. I never played that game, so I didn’t know what to expect, besides a point-and-click space adventure with some impressive, textured visuals. And at first, there isn’t much beyond this. Its stilted voice acting and by-the-numbers opening do little to help. You are Rachel Manners, the last surviving member of a space crew that is awakened from cryogenic sleep by an amnesiac A.I. Teaming up with the titular J.U.L.I.A. and a robot named—sigh—Mobot, you have to figure out what happened to the rest of the team.

Rachel’s smooth face and dead eyes make her seem as robotic as her companions;  her stuck mouth flaps up and down, unsynchronized to the dialogue. For the only human character you interact with in the game, it’s jarring to see, even compared to J.U.L.I.A herself, who has an excuse for being that way. Hearing Rachel feel very little when it comes to her dead and missing crewmates makes the player apathetic to her plight. Who cares if her colleagues are dead or alive if Rachel doesn’t seem to? Most of the time, when looking beyond her blandness, it’s just distracting even if after a while, you get used to it.

Then there are the puzzles. This is an adventure game and as such, you’ll be treated to some very complex puzzles. This in itself isn’t an issue since some are rewarding to solve, but the player is often faced with long-winded, sometimes irrelevant ones that tend to take you out of the game. Not only does the first puzzle—trying to repair all the rooms in the ship—take a few minutes to complete, but it ends up being pointless. The act or fixing each room comes down to hitting one of a few buttons in the proper order, something repeated over multiple rooms in a repetitive manner. Considering you never see inside the ship again, it mostly works to set a precedent for the kinds of puzzles you’ll be facing: long, sometimes empty, often repetitive clicks of the mouse. The puzzles involving the blueprints for Mobot upgrades are especially a chore, with lining up the pieces on the grid becoming more about dumb luck than something built out of logic, even outlandish adventure game logic.

It takes a couple of hours of gameplay to truly discover what sets J.U.L.I.A. apart from all other sci-fi; from the Fireflys and the Mass Effects that seem to live within its programming, whether it was intended or not. Once you get past the cliched opening, Rachel’s journey takes a turn into ambiguous, complex territory. It forces the player to form opinions concerning imperialism in the space age, what implications genocide can have on unwilling perpetrators, martyrdom, and the true impact of religion and traditional beliefs. Sometimes it feels like a lot to take in, especially among the puzzles and the world lore that is thrown at you constantly, but the game gives you plenty of opportunities to refresh your memory. There are puzzles in the second half of the game, when intricacies in the history of one of the planets, becomes vital for solving the mystery of your crew and the game challenges you to remember each detail. The creators behind J.U.L.I.A. know how important the story elements are and gives them the proper spotlight to shine in.

The sheer amount of detail is incredible.

Just the sheer amount of detail put into each aspect of world-building, from the designs of the planets to the religion of an alien species, is incredible. Sure the human and robotic models leave a lot to be desired, but that’s only compared to the detailed, lush backgrounds of each of the planets. They tend to fall into an archetype–ice planet, jungle planet, rock planet, just to name a few–but being able to see the lines in the sand and the vines hanging from the canopies is a bonus to the already-complete story.

Yes you have to dig for a bit in order to find the story. You have to get past the poor setup and the drawn out puzzles and the sometimes slow pacing to feel a connection with Rachel and to truly understand what she is going through. There is an important choice you have to make at the very end, where Rachel has to choose where she is going to go, who she is going to help. At the beginning of the playthrough, this would have proven to be an empty decision. However, after finally reaching the eye-opening point where I saw J.U.L.I.A. being more than just an android, it became tough and emotional. The whole game is like this, you just have to work a little harder to get there.