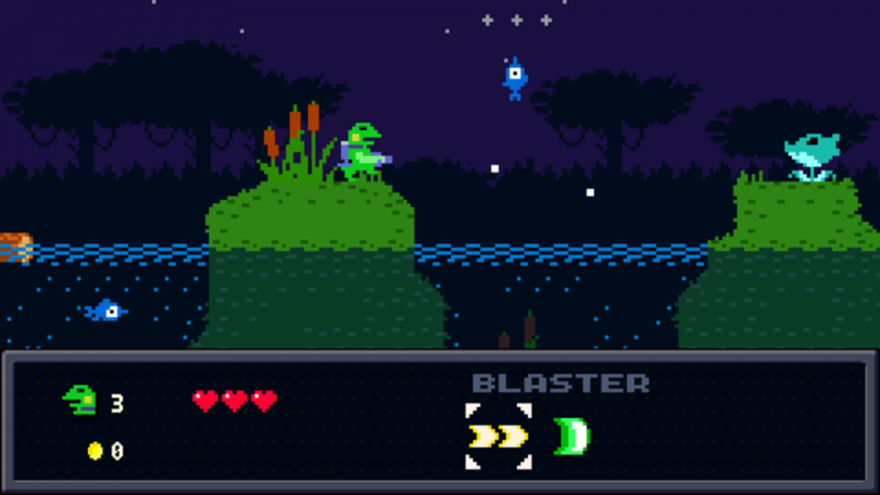 I’m a bipedal frog standing still in the break room of my company, Cat & Frog Inc, when a red emergency telephone rings calling me into the president’s office. Soon, I’m heading down a long elevator with the president’s secretary and a scientist (read: talking pink puffball and talking cat wearing a lab coat) before I step on a teleporter and disappear. What’s his job, the pink puffball asks?

It’s an age-old story, and one that serves as the loose container for the dreamlike debris of Kero Blaster, the latest from Cave Story developer Studio Pixel. The teleporter puts me down into a desert and a tumbleweed bounces towards me menacingly before I blow it away with my back-mounted laser cannon. It came at me with a knife, I imagine myself writing in an office report, scrawling out a laundry list of casualties: the animate flower that shot Mario-era fireballs at me; a fish that jumped out of the water while I jumped across floating logs; a bat which dropped from the ceiling as I walked beneath it; a giant purple bird whose family is probably wondering when he’s coming back with those frog-steaks.

When I get to the end of the first level, I’ve already forgotten every enemy that I’ve killed, but I can assure you, they were all kind of cute, rendered in the same early-era blocky style that goes hand-in-hand with the retro side-scroller. Like Cave Story before it, Kero Blaster is designed in the image of a certain amount of nostalgia; but while Cave Story took that influence and expanded on it, Kero Blaster is a bit more content to rest on its laurels, creating an experience that is essentially a linear love-letter to the games it draws from. There are no surprises here: upgrade your health, upgrade your guns, collect new ones, and mow down the legions of enemies before you in search of greater and bigger bosses.

And the bosses are Kero Blaster’s success. They’re huge bullet sponges, monoliths that take up way more screen real estate than I, the tiny frog protagonist. They’re the purest parts of Kero Blaster, each one a tense, minutes-long experience that usually exudes the inherent weirdness of this world. My favorite is a rectangular clock face with torso, legs, and jaunty scarf caught in the wind, a tiny pink bird sitting daintily atop his head. He’s running after me and the train I just took from the teleporter-less snow mountain, and I don’t know if he’s trying to kill me or if he’s trying to get the train to wait for him to catch up. Kero Blaster’s strength is that it takes the mundane—office jobs, trains, computer viruses—and twists them, pumps them full of creative energy and drive that make the world a delight to exist in, one where anthropomorphic refrigerators shoot snowballs out of their freezer faces.

This makes it even more disappointing that, aside from those boss fights, the game itself is totally bereft of that same creativity. Kero Blaster is incredibly linear, which is fine—it doesn’t take much to get me to play Mega Man 2, after all—but it seems to be missing a key component of what makes side-scrolling levels challenging.

The basic, kinetic opera of interactivity.

Kero Blaster’s first enemy, a tumbleweed, is an essentially benign object that slowly ambles towards the player, reminiscent of the first Goomba the player encounters in Super Mario Bros. This is important because by moving towards the player—in the same way Mario’s Goomba did—it forces the player to act, opens the curtain on the basic, kinetic opera of interactivity. When an enemy moves, it forces the player to make a choice; and more often than not, the choice can be uncomfortable because it does not originate on the player’s terms. A moving enemy creates excitement because at that moment, inaction is the only choice that definitely leads to certain harm.

Unfortunately, the tumbleweed is an outlier. Kero Blaster’s levels are pregnant with this lack of choice, this lack of immediate harm. Aside from a handful of birds and weeds, most enemies are either stationary or pose no threat until I hit them. Kero Blaster’s minions all seem to be lying in wait for me to make the first move: bees don’t chase me and moles don’t throw rocks until I get too near; underwater sea urchins launch hectic lightning bolts in four directions, but only after I’ve shot at them. Once all my guns are upgraded, enemies rarely get the chance to fire back, usually dying before I’ve even gotten within their apparently short ranges.

The boss encounters are the antithesis of all of this because they force, they threaten. They exist in closed ecosystems where, unlike the regular enemies, they cannot let my existence continue. There’s a boss rush portion of the game, but it’s tacked on at the end, only made available to me after a second playthrough that drops me down to one starting hitpoint instead of two. But the game lets me rebuy health upgrades and lets me keep my already-upgraded weapons, and it’s clear that Kero Blaster doesn’t understand where its difficulty should come from.

I’m relieved to get to the end of it not because I’m looking forward to playing all of the bosses again in one try, but because it means that if I fail—if I die to a boss repeatedly and run out of lives—I don’t have to go back through the exact same level full of the tedious, non-threatening enemies again, and again, and again; I can just play the bosses, which is what this game should have been about from the beginning.

It takes a few tries and lots of cursing to successfully get through boss rush—dispatching giant fish, giant clock, giant cat—and it’s a treat, one that, according to save data, finally took me all of four minutes and 25 seconds out of a total of nearly five hours. And after the credits I’m back in the break room, a frog standing alone, wondering if anything has changed. When I start a new game it asks me if it’s my first time, and I select no. “My apologies,” the game replies.

I appear in a desert and a tumbleweed bounces towards me.