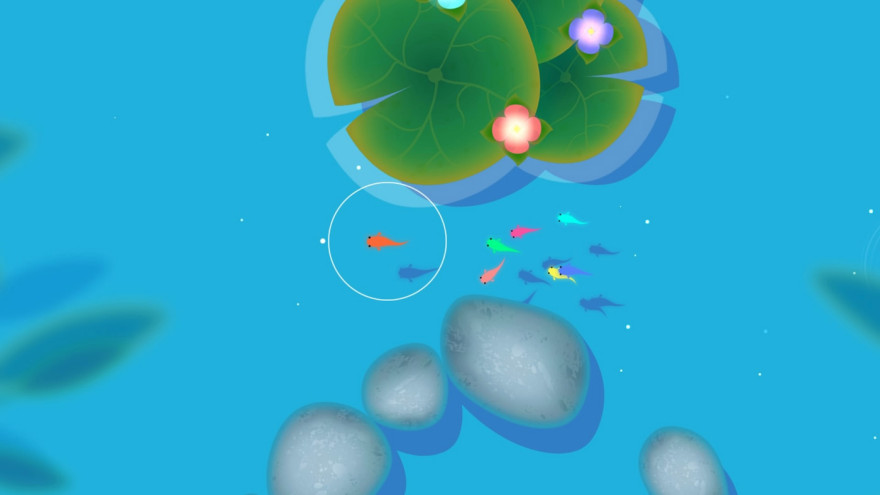 Koi stars a koi fish facing dangers beneath the surface of its resident lotus pond, such as predator fish and spiked barriers. By causing flowers to bloom, the titular koi can “purify” the pond, turning the predators into friends and cleaning the waters. DAQ, Dotoyou’s lead designer, told me the idea for the game originally came from the team’s love of animals and their respect for their environment. “We combined this idea with our experiences and thoughts about what it means to express a large idea using smaller concepts,” he said.

With Koi, Dotoyou is hoping to give players a bit to think about—like the effects of pollution. “[O]ur hope was that by making it the inspiration for the storyline, players would take a moment and reflect on this very important situation that is harming the existence of our planet— providing the opportunity to open up a larger conversation on this topic,” Dotoyou CEO Julien Li said.

Furthermore, the studio wants players to experience a range of emotions playing Koi. DAQ explained, “Through experiencing the fish, flowers and water in-game, we want players to feel what we call ‘lingqi’ or insight and realization—something that’s special, spiritual, beautiful and out of the ordinary.”

Being the first Chinese team to have released a PlayStation 4 game in the West is a very exciting feat for the team. “We feel it’s pretty miraculous, and it’s something of a milestone in Chinese gaming history,” Li said.

DAQ mirrors this excitement, adding that Koi is a chance for Western players to become familiar with a game from China. “We believe that, after us, there will be tons of other console games that will be appearing on the televisions of gamers all over the world,” he said. “This kind of trend, a trend in which the culture of gaming becomes more open and versatile, is something which we really look forward to.”

Koi is available now for the PlayStation 4. More information on the game can be found at its website.