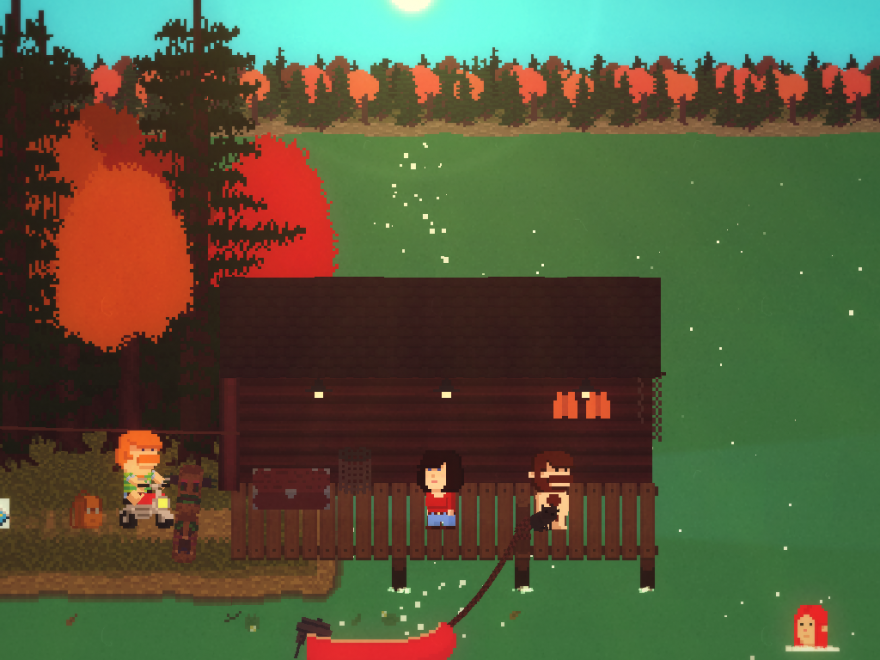 “It’s essentially a digital doll house with an axe murderer,” explains Roope Tamminen, regarding the horror-comedy game he released today.

To be fair, there’s more than one axe murderer in Lakeview Cabin Collection’s first episode. In my playthroughs, I counted at least two killers: one redhead hill-billie with a knife, another was an oversized clown-baby-man wielding an object I was too terrified to identify. There could have been a third killer, but I cannot be sure as while trying to escape them my character slipped in a puddle of his own puke. So, yeah, I was a little preoccupied with losing my composure to even notice the identity of my assailant.

If the description of those axe murderers—along with the game’s title—comes across like generic horror movie bullshit regurgitated for the umpteenth time, that’s because they are. Like the iconic 2012 satire Cabin in the Woods, Lakeview Cabin manages to use the formulaic symbols of our horror-entertainment to surprise us rather than satisfy any expectation.

Yet, while Cabin in the Woods subverts expectations by giving audiences a peek behind the horror movie curtain, Lakeview Cabin feels like a glorious chaos-simulator of horror movie tropes. Tamminen says that “while those tropes feel played out in movies, I found they weren’t really used much in games. So, unlike Cabin in the Woods, I could go for a more straight-forward approach on tropes and still feel fresh.”

Nothing is as you’d expect, and in the most unanticipated way possible.

Although Lakeview Cabin utilizes tropes, it is without a doubt one of the most consistently surprising games I’ve played. Nothing is as you’d expect, and in the most unanticipated way possible. The game plays with the darkest reaches of our collective minds not through subversion, but by forcing us to reenact the archetypal movie tropes which stand-in for actual plot or human characters in many horror films.

As with its primary inspiration, Friday the Thirteenth (and many other 70-80s slasher flicks), the one set rule of Lakeview Cabin seems to be that “if you have sex or do drugs, you are going to die.” As psychoanalytic feminist film critic Carol Clover argued in her groundbreaking work Men, Woman and Chainsaw, every good slasher film needs only one straight-edged, virginal girl to survive all the way up until the end—until her innocence gets sacrificed by forcing her to relieve the trauma for the rest of her days or just die horribly anyway.

Because, as we reach the climax of our goriest flicks, audiences need a character to identify, empathize and feel horrified with; and who better than someone who could in no way be viewed as a victim of her own transgressive sins? “The Final Girl” (as Clover calls her) elicits the desired emotional responsible from us, as we root for the symbol of virtuous human good in a monstrously evil world.

But every Final Girl requires a troop of lesser halves to make her look virginal by comparison, either in the form of an entire promiscuous friends group, or just one encompassing “whorish” counterpart female character.

When you begin Lakeview Cabin, Tamminen explains, you probably won’t know that other avatars are even available, so you explore the world for the first time as a mustachioed Don Juan—typically one of the first to go in horror flicks along with the debauched girl. As you explore, your impulse “is to mess around with everything, bumbling around and bumping into obstacles, drinking all the booze, smoking all the pot. You know, just because it’s there.”

But things quickly turn south as night falls. “You don’t exactly know what will make the killer come after you, which adds to the danger of exploration,” Tamminen says. Though Lakeview Cabin invites you to indiscriminately experiment with each bizarre, hilarious, interactable idiosyncrasy in its world, your actions can cause unintended consequences. “The player essentially becomes the ‘sexualized whore’ character themselves in that initial playthrough: boozing, having sex, and probably dying pretty quickly. Then they restart from the beginning, as a different character.”

There are four avatars in total you can switch through throughout a playthrough, each corresponding to a horror movie trope we know and love (except for hotpants dude. Not sure about that one.)

In contrast to a buxom, V-neck clad brunette, the Final Girl in Lakeview Cabin is a modest strawberry blonde waif type. She’s one of the last options in the cycle-wheel, so that “the more you play, the more focused you become on surviving rather than exploring, gradually leaving behind the drugs, sex and booze. You become the Final Girl without even realizing it.

Though, before you get too excited, Lakeview Cabin isn’t necessarily a walk in the park (and I’m sure there’d be axe murderers at any park too). Like the blood shed guaranteed in any slasher flick, the game promises you death, and plenty of it. But since Tamminen designed each failure to be fun, it’s hysterical and worthwhile every single time—coincidentally also causing a mild aneurysm of terror to curb too much laughter.

Though Lakeview Cabin III (the first installment in the collection) is out now, three more episodes will eventually be released, with the second episode most likely coming sometime over the summer. The next one, Tamminen has announced over on his Twitter, will continue the female-centric theme of the first with an all-girl cast. “Slasher movies have always featured strong female characters. That’s the one thing that they actually get right with these movies,” he says. “Of course, most of the time they mess up by adding airheads to both genders who overshadow the complex characters.”

But Lakeview Cabin takes the good with the bad when it comes to horror tropes. After all, you can’t have the naked/farting frat bro who bangs all the women without the strong Final Girl who uses her wits to stay alive. “Lakeview Cabin Collection, and the next episode in particular, is a celebration of all those ass-kicking females in our slasher movies.”

So there it is, Final Girl: your ode, in videogame form. Let’s just pray you stick around long enough to see the light of day/don’t lose too many limbs while doing it.

You can buy a season pass to all of Lakeview Cabin Collection’s future episodes on PC, Mac, or Linux for $9.99. If you want a free preview of the gameplay, be sure to check out the original freeware Lakeview Cabin game from a couple years back.