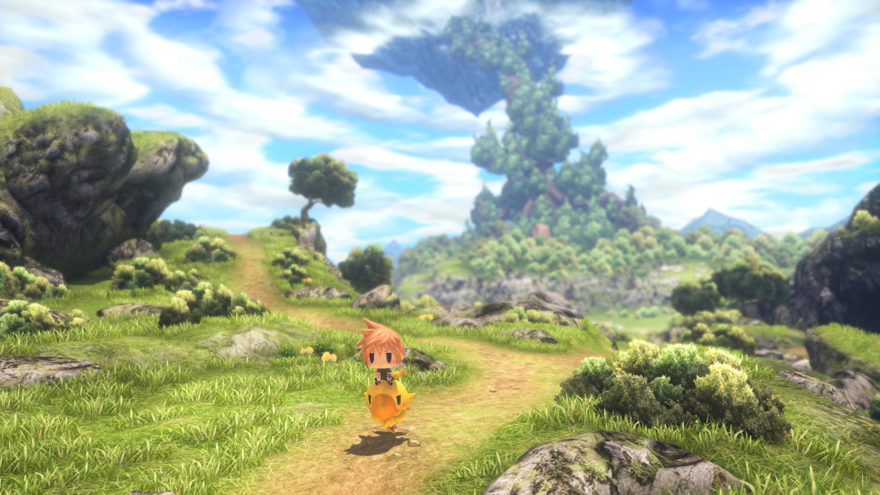 One of my favorite things to see compared are Funko POP! figures (of the United States) with Good Smile’s Nendoroids (of Japan). The two are at once comparable—both being a popular series of uniformly designed figures—but also incomparable. POP!s are chibi (small), cheap, and most of all: ugly. While Nendoroids are also chibi, a bit more pricey, and most of all: actually really cute.

When put side by side, the cuter figure is always clear. I’ve always taken it as a sign that my fellow Americans don’t know what cute means. But with World of Final Fantasy, the latest JRPG clout of nostalgia-baiting from Square-Enix, maybe the “I don’t know the basic definition of cute” epidemic is more widespread than I originally feared.

This dissonance of perceived cuteness popped in my mind as I played World of Final Fantasy. Playing it was fine, if not banal in terms of character design for the chibi-iterations. It reminded me of another fan service-oriented game from the Final Fantasy squad that carried a chibi-fied design: Theatrhythm Final Fantasy, the surprisingly great rhythm game series for the 3DS. Theatrhythm and World are two sides of the same coin: both relying on heavy-handed nostalgia and the player recognizing the familiar streams of characters and enemies that cross their path, but boiling down to one real thing: being cuter than their predecessors. Or in World’s case, trying to be cute and failing (in most cases).

In summary, World of Final Fantasy is a Mirage (or monster) collect-a-thon like Pokemon, wrapped into a tidy JRPG. The battles are quick and satisfying, with plenty of complexity through the ever-befriendable Mirages that you can summon to your beck and call. Plus, they stack on your head like Tsums Tsums. The game has areas that are both familiar and new to players of the sprawling series, though with not much exploration to be had. It’s an enjoyable, if a bit too familiar, romp through Final Fantasy history.

And there will be people that think the stout, droopy-eyed iterations of beloved characters like Cloud and Cecil are cute. I’m not one of them. At least, World of Final Fantasy isn’t fully strapped to its ugly chibi side. With merely the tap of a button (or two, to be exact), you can switch back to the “normal” sized versions of your sibling heroes. The overly-buckled, lanky, spiky-haired characters we’re used to, with impeccable character design by Tetsuya Nomura (of Kingdom Hearts fame).

Chibi-fying the heroes of our favorite games isn’t going to instill life into the series, or even necessarily bring in any newcomers. It’ll just make us fondly remember the much better, and more adorable, games that have come before it. But I guess that’s not the point. It’s the same reason Atlus’s Persona 4 (2008) had a couple of eyebrow-raising spin-offs to capitalize on their popular team of detectives. World of Final Fantasy, like last year’s Persona 4: Dancing All Night, is just another excuse to round up the gang again. But after hours of playing it, I just wished it was a port of the arcade-bound reboot of the PSP fighting series Final Fantasy Dissidia instead. Or another Theatrhythm, I’d take that too.

World of Final Fantasy is available now for PS4 and PS Vita for $59.99.