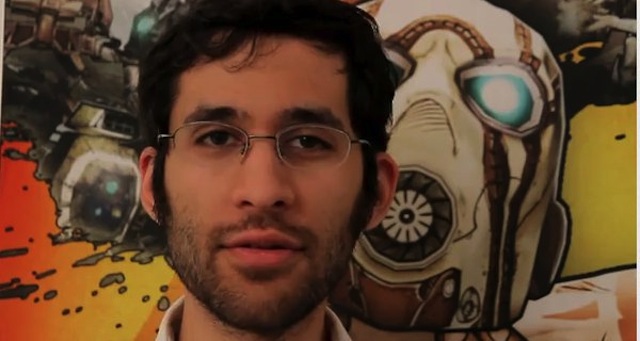 Players of the first Borderlands will remember an occasionally hilarious narrative without a lot of dialog or characterization. For the sequel, Gearbox hired 24-year-old Anthony Burch to “double down” on the humor of the first game. We chatted with him today, the day of the game’s release.

How did you get involved with Borderlands 2?

Blind luck. I do my own comedy web series and I did that for a few years while I was a reviewer and writer for Destructoid. I met Mikey Neumann, who is Gearbox’s creative director, at the Game Developer’s Conference. He was, apparently, covertly interviewing me for the job. He wanted someone who wasn’t a capital-w writer, Someone with no experience but was funny and cared a lot about games. Maybe they made a horrible mistake.

What is your background in game writing?

That’s it, man! This is the first game I’ve ever done. I majored in creative writing at Arizona State, which is like a college, and I shot a bunch of poorly-composed videos about games and game humor. I am the least-experienced person in gaming you will ever talk to.

Gearbox says story was a big priority for them on Borderlands 2. Why?

A lot of it was due to player feedback. People said they liked the story that was there [in Borderlands] but wanted more of it. The majority of it was presented in blocks of text. Sometimes players felt like they were doing things to do them rather than for a narrative reason. We wanted to change that.

No one plays Borderlands for the story. What are the challenges of writing a narrative for a game that no one buys for the plot?

I think that is one of the reasons they hired me. I am very much of the opinion that gameplay comes before story in nearly every circumstance. It’s just much more significant. I don’t want to watch a 20-minute cutscene, and I don’t want it to infringe on my agency as a player. I wanted to make sure that the player can just get the quest and run off if they want. Those are the games I want to play. I wouldn’t have wanted to write a 20-minute cutscene anyway.

What do you mean by the story infringing on the player’s agency?

There are games that tell the player to protect a person and you don’t consider them worth protecting. Or they tell the player to kill this terrible person, but because of a mistake in writing they feel more sympathetic than you do. That always niggles me.

There is an early part in game, after you kill a lot of players, when [your sidekick] Claptrap says “Oh those people had lives! What did you do?” and then halfway through his speech he can’t keep up the ruse and he says “screw those guys!”

What were your narrative inspirations?

Portal and Bioshock and System Shock 2. I wanted to make it centered around an antagonist, always reminding you that “I’m the point of this game.” A strong antagonist is also a vehicle for character.

Then, I wanted to go for a  Dr. Who or Firefly sort of vibe. Those shows are very dark and epic but the majority of the time they are funny. The humor endears you to the characters, so when things go bad the humor is turned against you.

What is it like to write a huge game with branching player experiences? You told IGN that the script for this game is five times bigger than the original.

It’s actually a lot of fun. No two types of dialog necessarily sound the same. Sidequests tend to be a lot more fancy-free and footloose. The plot is a little more dark. Writing contextual stuff is really fun, walking around seeing stuff the level designers created and making up stories for it.

Look, when you play the game for long enough, and fifteen psycho dwarves run after you, it puts you in the right frame of mind to figure out what sort of dialog makes sense in the situation. The game is fun so the story should be fun.