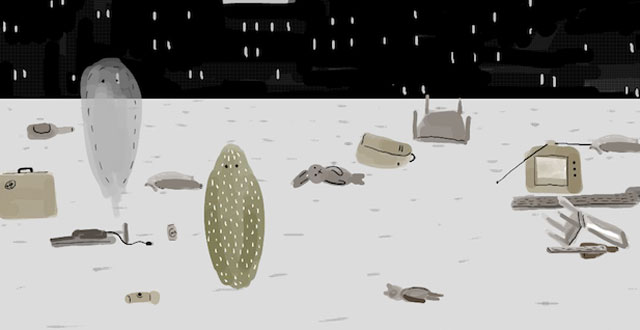 When he walked past the office at 5:00 a.m. on Sunday morning, Paolo saw my wife and me sleeping facedown on a desk, sitting side-by-side on rolling chairs. On the screen of my laptop, the tail end of Kiki’s Delivery Service was squeaking away, Kirsten Dunst’s piercing voice somehow failing to wake us. Later that morning, when we got up after our hour-and-a-half of sleep, Paolo told us he’d seen us. He told us, “You were beautiful.”

We were at the Nordic Game Jam in Copenhagen, Denmark. When you’re trying to make a videogame in roughly 42 hours, the meaning of beauty shifts a bit. The Nordic Game Jam is the biggest single location of the Global Game Jam. Worldwide, almost 1,500 games were made by upwards of 6,500 people plying their skills in game design, programming, graphics, and art—and staying awake far too long.

I decided on a whim to make the avatar of our game look like a walking pickle, and then inexplicably refused to change it.

Paolo was able to see our brief sanity nap because the Nordic Game Jam is held at the IT University of Copenhagen. The university’s building is all about openness. Glass walls for the offices, glass walls for the lecture rooms. An atrium in which you could comfortably build a mid-size space shuttle. Spread all about, behind glass or out in the open atrium, well over 200 people were trying to make videogames.

At the Nordic Game Jam, there’s no hiding the awkward avatar you just drew in Photoshop or shielding the glitchy prototype you just compiled from the wandering eyes of the people strolling past. Why the hell are they strolling past, anyway? Don’t they have something better to do? Alien races to design, or physics to code? At Game Jam, anyone not bent disfiguringly over a computer is suspicious that way. Get back to work.

In the wee hours of the morning, game design and development can get a touch weird. Like many others, I’m sure, we made some rash decisions. We unpicked vast swathes of code because we didn’t like the way it looked. I decided on a whim to make the avatar of our game look like a walking pickle, and then inexplicably refused to change it. We talked, as a team, about scrapping everything and restarting on a project called “Snakes and Badgers,” based on a misheard piece of conversation. Hysteria and randomness reign in those early hours.

Yet all around, in every glassy nook and cranny of the university, weary minds were in the process of making worlds. Cranky, somewhat malodorous deities were squinting through bloodshot eyes at the rules for how virtual lives would be lived, bending pixels into new realities, and recording keyboard riffs for when their worshippers did something cool. Godlike conversations played out: “We need some way to blend an ape and a mime.” “Let’s see what happens if we turn up gravity.” “What if we just let the world be infinitely large?”

Each face that trekked to the front of the room bore traces of the madness, elation, depression, and quiet joy of making games under pressure. They fired up their games and talked us through—pointing out the special features, the graphics drawn by this guy over here, the physics programmed by that guy, the sound design by her.

There was a lot of beauty to go around.