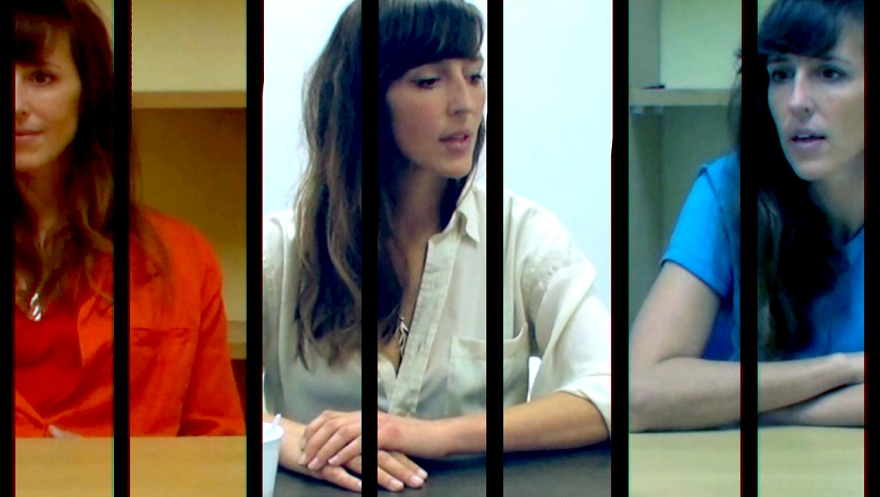 Attempting to categorize Her Story is not an especially simple task, and that is a delightful thing. Despite initial appearances, it isn’t really a full-motion video game—that much-maligned early-90s genre of choose-your-own-adventure video clips. While the game’s content consists of dozens of video clips of a woman apparently being questioned by police after the disappearance and death of her husband, the clips themselves aren’t interactive in any fashion. Similarly, it doesn’t seem accurate to talk about the game as interactive fiction given that the story is delivered through video rather than text, and doesn’t branch or vary in any meaningful sense beyond what the player succeeds or fails to discover.

Her Story is a police procedural without any cops, a purely linear story experienced without a predetermined order. It’s a murder mystery with only one suspect in which the outcome was determined years ago. It is a database search engine simulator that sets the player against the limitations of obsolete technology and an incomplete set of information. It is a gothic mystery staged entirely as a set of interviews in unremarkable rooms under sterile, fluorescent lighting.

She is simply listening and trying to understand

And for all these reasons, to one extent or another, Her Story is a deeply compelling experience. Even having uncovered just about all of the game’s nooks and crannies (I think), I’m haunted by the story the game tells, and the manner in which it chooses and declines to tell it. I’m still trying to figure out, in places, what exactly it is that I’ve been told about Hannah Smith and her husband’s untimely death, how much of it I can trust, and what details, inferences, and conclusions I’ve simply created myself.

But let’s go back to the beginning. When you start Her Story, you find yourself confronted by a simulacrum of an out-of-date PC desktop on a CRT monitor, complete with a simulation of the curvature and seemingly inevitable glare of a rounded screen display. Most of the screen is occupied by a video database search program with “MURDER” entered in the search field and an initial four clips as the returns for that query.

The game, thus, consists of listening to the subject of these clips, Hannah Smith, and figuring out what elements of her story might work as search terms to find additional pieces of the story in the database. Names, objects, actions, times, and locations all might lead to additional, unviewed videos if Hannah mentions them on other occasions. Search results, however, are limited to five clips, presented in chronological order, so a query for “car” might reveal that Hannah talks about a car in 12 clips, but viewing any beyond the earliest five requires adding terms to the search, or stumbling upon them as a result of a different query.

There’s no way to describe this mechanic without making it sound obscure and frustrating, but in the Google era, it’s surprisingly intuitive in practice, and the limitations of the search function in Her Story are in fact integral to the success of the experience. While the story is built on the well-known tropes of police interrogation, by making the player a researcher interrogating a database, Her Story offers the opportunity to play detective without playing cop. While the player looks through the view of a police camera, she is not asking questions, not assembling a case. She is simply listening and trying to understand.

Her Story manipulates this uncertainty with audacity and skill

It feels like unusual praise, but more than any other game I’ve played, Her Story captures the fascination and frustration of archival research—sitting with frequently obsolete equipment and trying to figure out how to even start looking for information, struggling against idiosyncratic and seemingly arbitrary organizational systems, unsure whether the things you can’t find are there at all or whether you just aren’t looking correctly.

And then the joy of the moment when you find something, sometimes the thing you were looking for, finally confirming the idea you were looking to support, and sometimes something entirely unexpected, pushing your search in unanticipated directions. Or else sending you back to the very beginning, checking your notes again, armed, finally, with the right questions.

Questions are, after all, the beating heart of the murder mystery, and as is the case with many contemporary takes on mystery stories, Her Story is more interested in questions which resist answers than in neat resolutions. Like Serial, Her Story derives a great deal of its momentum from the implicit promise that one more question, one more fact might finally make sense of the unspeakable. Around our water coolers, Serial functioned as a large-scale informal laboratory exploring how we process and interpret detail, and Her Story appeals to our need for narrativization in such a similar fashion that it can be almost tempting to decline to reconcile the game’s pseudo-documentary framing with the elements of the fictional universe that draw more from Chinatown than Agatha Christie.

Her Story finally operates with a sort of functional ambiguity

Which is to say that there is satisfaction in knowing, but it is not always the satisfaction you might expect. Every archive has its ghosts, the dead who speak and the voices behind them that haven’t quite been entirely silenced. Part of reading an archive is attempting to determine exactly what is possible and what is not, and Her Story manipulates this uncertainty with audacity and skill.

True to this experience, Her Story finally operates with a sort of functional ambiguity under its veneer of objective presentation. The player is presented with a crime and a sole suspect. By the end, there is even a narrative of what exactly took place, but no archive is ever truly complete, and all the information is never really all the information. You will have questions at the end of Her Story. Making sure that they’re the right ones may require figuring out exactly who is looking and how, though which camera and on which screen.