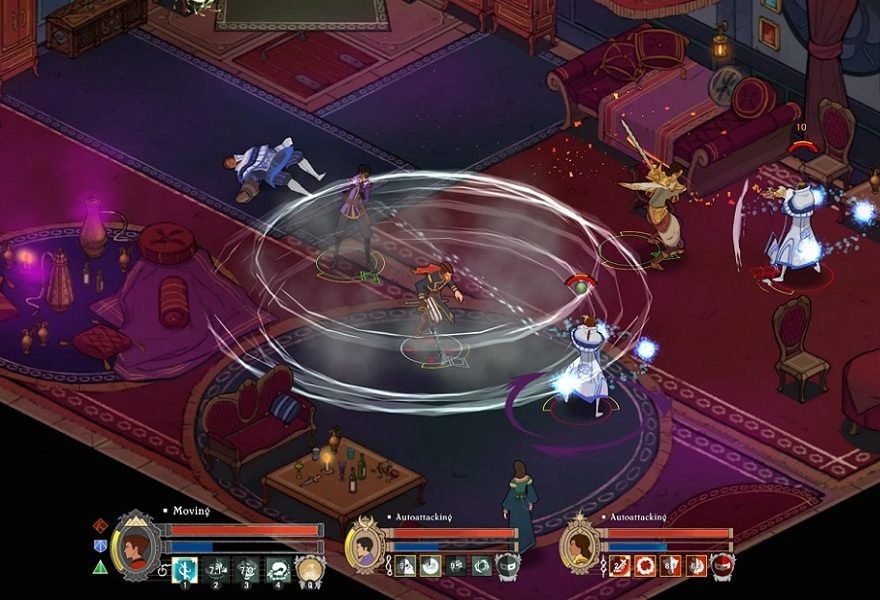 Delivered in the middle of Big Game season, Masquerada looks at first like a welcome relief from war, VR, and Watch Dogs 2’s emoji mask. The masks in its world are a different kind of grotesque. They separate the haves and the have-nots in a rigidly stratified sorta-Venetian society, granting elemental powers to elites who dress like every day is carnival.

The conceit feels fresh, and the city of Ombre is boldly drawn, with heavy black borders around tents and troops to set off freehand suggestions of grass blades and thin ruled lines of stone. The protagonist, Cicero Gavar, dashes around town with his hair swept back like an art deco hood ornament and a little red cape flapping over his shoulder. There’s some muddy intrigue between the town’s six (or so) ruling factions, but all you really remember is the metonym for the guilds, “the colors,” and the parade of bodies in gold, blue, and purple. When characters talk, banners roll down from the top of the screen to show their animated faces, a lavish effect compared to the stony portraits of Pillars of Eternity (2015), the new Shadowruns, or Divinity: Original Sin (2014).

Masquerada can afford the talking heads because it skimps on other RPG trappings. There are no decisions to make in dialogue, no stats to allocate, no equipment to manage (except masks), no items to buy, no quests to pursue. You just walk between glowing green rings that trigger story events or combat encounters. (Sometimes you stop to pick up glowing purple masks on the ground.) Merchants and bystanders light up when you mouse over them, for some reason, but you can’t speak to them or any other non-essential personnel. The game is so insistent on your full attention that it almost never lets you backtrack to a room you just left. At first this approach feels brisk, like you’re flying around the corners of the plot at a speed other RPGs don’t permit. But it’s not really praise to say a game’s at its best when you’re quickly putting it behind you.

I don’t think RPG players have any inalienable rights that are violated when they don’t get to play Loot Tetris or choose whether to romance a living statue or an amphibian. On the other hand, I wonder why Masquerada took the form of an RPG at all. Most of the game falls into a start-stop pattern where you walk a few paces to a story trigger, sit through a long conversation, then amble over to the next story trigger. Without the freedom to talk to strangers, to break pottery, to wander off the golden path, to dig into any corner of the world by choice, we might as well be jogging in front of a scrolling back projection. Why not ditch screen-by-screen exploration and skip between events Telltale-style? What would we miss?

Not the combat. Masquerada’s real-time-with-pause encounters exist only to space out the plot revelations and showcase a few neat monster designs: walking books, thrashing trees, violent pipers. The fights themselves are a free-for-all where no one can hold aggro, walling abilities seem useless, party members forget your commands or stand in place for no reason, and the layers of satisfying complication in a Pillars of Eternity or Divinity become a sad and distant memory. Occasionally, Masquerada would decide one character was “out of combat” and leave him watching the brawl from a safe remove, like a picnicker at Bull Run.

The game’s creators opt for a “not fair but also not hard” approach to ensure you breeze through everything anyway. My only strategy, effective in every fight in the game, was to leave trails of Emberveils (fire-mines) behind Cicero to detonate when touched by a pursuer. When enemies declined to chase, I ran in tiny circles to surround them with the mines, which look like puddles of spilled orange paint. Used alongside a mask that leaves a line of flames in Cicero’s wake, this technique became movingly reminiscent of playing Bomberman on the TurboGraphx-16 when I was 12 years old. But the thrill wore off pretty fast.

it builds up a codex instead of a world

You might expect a game with such a stripped-down chassis to be sparing with words as well. Instead, it’s mercilessly overwritten. Here’s the plot: five years ago, the Contadani (underclass) of Ombre rebelled against the Masquerada (upper class mask-havers) in the War of Bearings, stealing a number of Mascherines (masks) and creating a new faction of Maskrunners (lower class mask-havers) which are of course also divided into many subgroups such as the Dactites (assholes) and the Malecarte (“bad menu”?). Exiled at the start of the war, you, Cicero Gavar, return as an Inspettore (inspector) to solve a mystery for the Vaorone (mayor), who runs the Registry (government) and commands the Portieri (guards), the Regenti (diplomats), and the Vegilus (librarians). Gavar must also contend with the Seimora, the feuding guilds of Masquerada, which include the Luca Infinita (more soldiers), the Sorelles (sailors), the Labores (murderers), the Dieci Sovrani (wizards?) and the Altus Nobili (don’t remember). This is to say nothing of the Songstresses and their Soulsongs, the Dimenticate civilization, and the Accredita—an SAT-like exam that characters reminisce about so much, using such advanced vocabulary, that I was legitimately afraid the game was preparing me to take it.

I’ve read and played plenty of genre stuff; I accept the buy-in at the beginning, where you suspend your skepticism about characters saying “frak” or “hollowborn” or “Nilfgaard” long enough to let the story get its hooks in. But Masquerada never gets there; it builds up a codex instead of a world. Characters keep walking over and hitting you with a shotgun blast of nouns like “I never thought I’d see a Sorelle and a Sicario working together with the White Spire—and in the backyard of the Salt Breathers!” And more often than not these strained statements are preceded by breathy exclamations such as “Ages!” “Silent songs!” “Tides!” or “Lost legacies!” The voice actors, particularly Matthew Mercer as Cicero, lean in to the affectation by adding plenty of deep sighs (I think the meaningful sigh is meant to be the character’s catchphrase) and theatrical readings of lines like “For a city this dark to have a heart so bright…” He spends the last quarter or so of the game in enormous distress, yelling “No, no, no!” or “Ages, no!” or “Please, no!” or “No, oh no!” or “No!!!!” during his journeys between loading screens and glowing spots on the ground.

Somewhere between the tenth and the thousandth “Oh no!” it becomes impossible to take the game seriously. The melodrama flares up violently whenever a character dies; the game stops its herky-jerky forward progress to plunge into the most maudlin and repetitive scenes, and a story that began as a page-turner becomes a page-skimmer.

Masquerada declines as the plot slows down. The herky-jerky pace gets more grating, the mania for proper nouns more distracting. What looked like a scrappy little underdog RPG turns out to be a collection of worn-out ideas. Those who brave the final gauntlet of time-consuming but never challenging fights will forget that the game ever felt breezy or inviting. By the time the villain reveals that they planned out everything ages ago and you’ve done just what they wanted all along, you have to nod in agreement: I guess that’s why it all felt like such a waste of time.