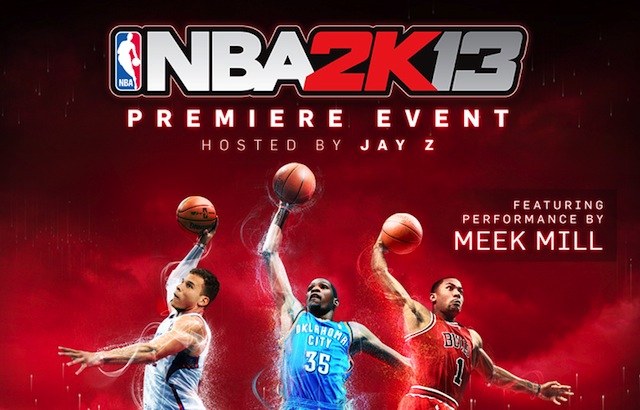 by Yannick Lejacq and Drew Millard

Last Wednesday, Kill Screen nightlife correspondents Drew Millard and Yannick LeJacq attened the launch party for NBA 2K13 at Jay-Z’s 40/40 club in Manhattan’s Flatiron neighborhood. After a night of celebrity-spotting, game-playing, beer-drinking, and head-nodding, the two convened on Gchat to consider what they had just witnessed.

Drew: the “aura of jay-z” that surrounded the event?

and, ultimately, this is jay-z’s week in new york

7:23 PM Yannick: well maybe its an obvious thing to say that PR stunts are created to create an aura of spectatorship

that happened that night

Drew: we saw a guy from rockstar

and we actually played the game

I guess those too

he killed it though

well i guess all concerts are commercials for other things

7:34 PM no I meant that he just sorta started to walk off

“there goes my dinner”

Drew: to be fair, i would be surprised if meek mill cared about videogames at all

Yannick: but yeah he was also performing in front of that giant screen showing the videogames

Yannick: also Ronnie was approximately five feet from us

Drew: and the cocktail napkins all said “nba 2k13”

ronnie is a human videogame character

Yannick: and he’s basically the real-life equivalent of the Gunzerker from Borderlands 2

Drew: he will be the first human to have their skin replaced with pixels

i played as ronnie/gunzerker actually

seeing Ronnie was also what made me sad

Drew: what do you mean?

Yannick: that and Kris Humphries

Drew: i never thought i would be in the same building as kris humphries

and then be reminded of it by having a dj yell, “KRIS HUMPHRIES IN THE BUILDING”

7:37 PM Yannick: Jay Z was the only real famous person that was there besides Meek Mill

Drew: to be fair, nas was there too

Yannick: and I’m pretty sure Jay Z just showed up and then walked out the back

he stayed for the entirety of meek mill

Yannick: where was he

Drew: he was in the VIP section that we weren’t allowed up to

7:38 PM does Nas say anything about videogames?

Drew: i think nas’ presence there says something about his friendship with jay-z

Yannick: I wish 50 Cent had been there

7:39 PM that man understands the craft of virtual entertainment

7:40 PM if 50 cent had executive produced that game it would have been nba jam

7:41 PM but what I was going to say before was just that Ronnie and the Jersey Shore’s presence along with Kris Humphries just made it seem like 2K had probably paid Jay Z a shit ton of money to be the “executive producer” on a game

just so they could throw a party at his club

and then no famous people showed up

i mean it felt hollow, ultimately

7:44 PM on the other hand there was free beer so that was cool

Yannick: I mean doesn’t the videogame industry makes more money than any other part of the entertainment industry at this point?

or its worth more

7:45 PM either way, the companies have a lot of money and aren’t really sure how to take the next step to be culturally relevant/respected

Drew: yeah, that makes a lot of sense to me

but it is also fairly different

7:47 PM Yannick: but right now theres just a bunch of people running around with too much money and a bunch of silly ideas

Drew: because jay-z basically said, “yeah, i am the epitome of everything mainstream culture hates, but also you have to accept me

and videogames are not driven by that same type of personality

Yannick: “let’s put a subwoofer in the floor, that’ll be so badass!”

7:48 PM what did Jay Z do that mainstream culture hates

besides being an incredible successful and talented black man

well isn’t that the whole problem though

7:50 PM but I started playing videogames because I didn’t really care about those kinds of things

Drew: is that true though? like if there were a super mainstream phil fish or something?

7:51 PM i started playing videogames because i was 9 years old

or my mom didnt

Yannick: Isn’t that what Cliff Bleszinski is

they were both profiled in the atlantic and the new yorker

those are pretty mainstream

Yannick: so we need game developers driving off cliffs with prostitutes and stuff?

we need gamedevelopers that sell crack

7:54 PM Drew: okay speaking of which i’m going to see jay-z tonight and i gotta run