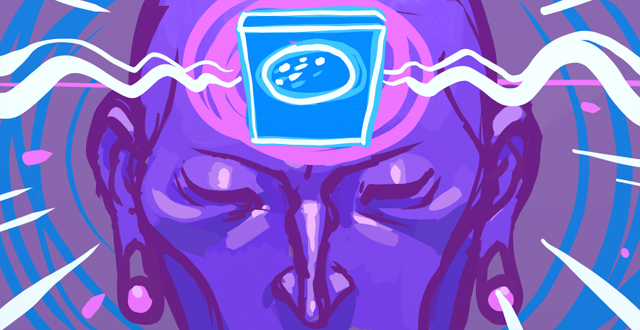 by Scott Wayne Indiana
@39forks
Under the band name FM3, Zhang Jian and Christiaan Virant designed the Buddha Machine in Beijing, China in what started as an idea for a new way to release an album of meditative sound loops. Now, the Buddha Machine has grown to become a cult object, bordering on iconic, complete with its own subterranean global community and all sorts of emergent fan creations. The simple box looks like a toy radio from the ’80s, and for disciples of that era, it embodies all the characteristics of a spiritually charged toy. What follows is a discussion about the Buddha Machine with Christiaan Virant.

As the designer of the Buddha Machine, how do you describe the object? Do you think of it as a toy at all?

I designed the machine in Beijing with my bandmate Zhang Jian. Together we have a band called FM3, which is the phonetic sound of the Chinese band name AiFuAiMuSan. In the early days of the project, we explained to people that we wanted to make a pocket radio permanently tuned to one station: FM3.

Whether or not it’s a toy, Zhang and I have never discussed this and it only came up in a few reviews of the object. If a toy is a tool for discovery and enjoyment, then the machine serves this purpose.

It seems that especially when people start putting the machines together and experimenting with the interactions that a very playful kind of activity takes place, one that is also sort of inherently meditative.

The interaction between the machines creates an endless and shifting listening experience. Like a Lego block, the Buddha Machine is simple and solid on its own; add a few other machines and a myriad of possibilities bloom.

Play frees us from the mundane. It opens the mind to wander, create, or just simply coast. For Zhang and me, play is a very important part of our conceptual process and we try to imbue an element of fun into everything we do. We are currently working on a remix CD featuring 15 Chinese underground artists who will compose songs based around the Buddha loops. Those loops can be heavy stuff. To lighten it up, and also make the CD a bit more participatory, we will ship the disc with a bespoke “party pack” featuring our freshly-minted FM3 money and a deck of playing cards detailing info about the artists. We provide the music, money, and cards; the audience builds its own fun based on the tools at hand.

Was the original intention for it to be a spiritual tool in any capacity?

Not as a physical object. But all music is a spiritual tool of some sort. In the right mood and setting, even the most mundane pop tune can bring a flood of memories, emotion, bliss, anger, tears. Perhaps this is why music is so vital and forms an important part of our identity. As for the music inside the box, I compose with a distinct goal in mind, and all of our music aims to create a hypnotic or transcendental state in the listener.

Can you say a little more about the transcendental state, perhaps describe your own experience of what it is like?

Anyone who has lost themselves in a film, painting, or album knows transcendence. We all know it, we all feel it; but it’s slippery and hard to hold, even harder to describe….

When people first encounter the Buddha Machine, some seem to expect more to happen. Do people ever ask you, “Is that all it does?” How has your answer to that question developed over the past few years?

For Zhang and me, the Buddha Machine has always been an “album” just like any other. Some bands put their music on CDs, others cassettes, still others use vinyl platters. We make machines. Turn it on and music comes out. Put a CD into a CD player and music comes out. That’s all they do. The value is not in the utility of the device, it’s where the content takes you. If one Buddha Machine gets tiring, add another, or try three together. The interaction between the machines creates an endless and shifting listening experience. Like a Lego block, the Buddha Machine is simple and solid on its own; add a few other machines and a myriad of possibilities bloom.

Building, using sounds as building blocks, is very intriguing and references play. Thinking of the machine as an album—while suggesting building with multiple machines—essentially gives people the option to remix the album in real-time. It seems like this multiple-machine play is almost essential to really enter the world of what the Buddha Machine has to offer. Not many people play with a single Lego block, right?

The Buddha Machine was designed as a standalone unit. Music carries much more information than a small plastic block, so the Lego comparison may not be entirely appropriate. Only after the Buddha was produced and we held it in our hands did we realize the power of playing multiple machines. I remember the “eureka” moment very clearly. It was in 2005 after a gig at the Paradiso in Amsterdam. While enjoying some very nice Dutch sativa, we unboxed a dozen machines and set them playing around our hotel room. That evening, Zhang and I very quickly reworked our live set and Buddha Boxing was born.

Toys and objects that function within a limited set of parameters, like the nine sounds of the simple Buddha Machine, can result in surprising emergent behavior. Have you encountered the Buddha Machine finding its way into various new activities that you never foresaw?

Here is where the true magic begins. Zhang and I never expected to sell more than a few hundred machines. In fact, our first production run was 500 units, of which we planned to use 200 units for ourselves in a sound installation. But the Buddha Machine quickly realized that famous Burroughs aphorism about the street finding its own uses for things. Within a few months, bands were using the boxes in remixes and live shows. Our loops soundtracked poetry readings, yoga sessions, lovemaking, etc. A few people even used them as a calming sound during childbirth. On tour in Europe in 2007 we met a few parents and their children who were literally born listening to the Buddha Machine. One guy in the Netherlands grows hydroponic weed to the different loops. People around the world get inside the machine, add parts, and “bend the Buddha” to expand its sonic potential. Search YouTube for “Buddha Machine circuit bent” for some cool stuff. Artists have used it in their art projects. The first two loops on the Buddha 1 are in at least 10 experimental or even not-so-experimental films. And I stopped counting music remix versions after they topped 200.

So many people used the machine in so many ways, Zhang and I were inspired to rethink the device and in 2005 devised a game-like live performance called Buddha Boxing. We toured this live set for the next 4 years in Europe, Asia, and a few gigs in the USA.

That all sounds quite magical—and that’s why I asked—because I had a feeling there was a world of mind-bending and meditative activities that emerged from the simple Buddha Machine. Can you describe a few memorable moments from the Buddha Boxing performances or from your installation with 200-plus units?

Buddha Boxing is a short performance lasting about 20 minutes or so. After the “show,” Zhang or I explain the basic guidelines and invite members of the audience to play. We then retire to the bar and let the gig continue. This is the best part of any FM3 gig—the audience enjoys taking over the stage and we enjoy hearing how people approach our music. The best of these crowd-sourced gigs is a social event that can last many hours. In Lisbon the venue was hazy with smoke and reeked of cheap table wine, and people continued to play until dawn! We later devised a four-player variant, which offers many more machines and musical possibilities. One four-player gig lasted a full day in Jerusalem: people wandered in and out of the bar, new performers taking over for ones that would step outside to enjoy the warm spring air. In 2006, a club in Austria purchased a full set of Buddha 1 machines to provide to customers so they could Buddha Box even when we are not around. Since then, bars and clubs in Sweden, Germany, and a few other countries have done the same.

Does the multiple machine functionality change the way you see future designs? In other words, will you experiment more directly with loops that mix well together?

From the very beginning the loops were designed to work together as a single composition. Those first Buddha loops were taken from our live sets which we toured in Europe 2002 to 2004. We had a solid two years of performance experience to road-test the music, so we knew which loops worked. Buddha 2 loops were then composed to fit the Buddha 1, and with Chan Fang (Buddha 3) we provided only melody to complement the drones of the first boxes. As for future units, I’m currently in early development of a machine which will ship as a duo and feature vocal samples. The machines will be designed so they must be played together and will not work alone—a matched pair.

Has the Dalai Lama or other monks listened to the Buddha Machine?

I’ve never seen the Dalai at any of our gigs, so I don’t think he’s had the chance to buy a machine from us. Perhaps he ordered one online. Zhang and I have a lot of friends who are living Buddhas. They find the machine amusing.

FM3 will be releasing a new version of the “Jukebox Buddha” remix compilation in November 2011. The compilation will be called “He Xie Fo” and feature a lineup of all Chinese artists.

Scott Wayne Indiana is a recent graduate of NYU’s Interactive Telecommunications Program (ITP). Along with various engagements in the professional world of interactive design in NYC, Scott continues to experiment with play, toy design, and community building.