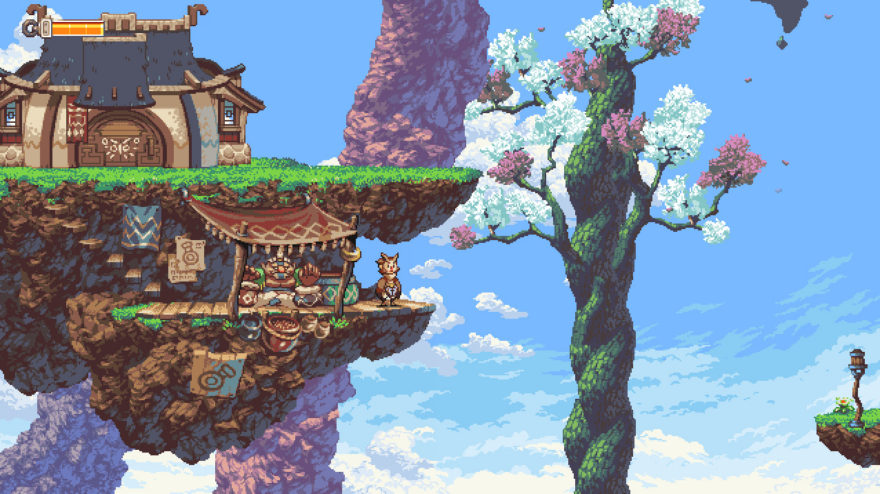 Owlboy, which has been in the making since 2007, was at one point a joke. It sat alongside Fez (2012) as retro-sentimental platformers by independent studios that promised a lot, but seemed fated to never come out. “Do you reckon Owlboy will come out next year?” someone might ask. “Haha, yeah right,” might be the reply. Fez did eventually come out after five years of waiting, but Owlboy didn’t—it’s been nearly a decade now.

When Jo-Remi Madsen of the Norway-based D-Pad Studio tells me it’s “OWLBOY TIME,” I presume that it is a joke. The concept of Owlboy Time is more a unit of measurement to me now, one that means something promised to arrive but never actually will. But Madsen isn’t joking, and apparently “OWLBOY TIME” means the game is actually coming out. Like, imminently—in the fall of this year, apparently. After an exchange, Madsen then tells me that the release date for Owlboy will be announced during PAX West at an “Owlboy Panel” that starts at 2pm on September 5th. Then a playable demo is thrown over to me and I know to take it all seriously.

As respectfully as I can, I ask level designer Adrian Bauer “Why has it taken nearly 10 years?” The answer, in short, is: it’s “complex.” The person who programmed the original prototype left back in 2009, and so new programmers were needed—it wasn’t until 2010 that Jo-Remi and Henrik Andersen joined the team as the two programmers, and D-Pad Studio was officially formed. Other reasons include the fact that the XNA engine the team uses wasn’t optimized until around 2012. The team also worked on another game, Savant: Ascent, which was released in 2013. “Also life,” Bauer adds to the list, accounting for loved ones passing away and members of the team experiencing burn out, forcing breaks in the work on Owlboy.

The other major factor is one that the lead artist on Owlboy, Simon Andersen, is able to speak on. D-Pad has taken no shortcuts in the creation of the game, particularly in terms of its pixel art. “I decided I was going to use Owlboy as a way to showcase pixel art done properly, using as few ‘cheats’ as possible,” Andersen said. What this means is that the entire game is made pixel by pixel. “No gradient or blur effects, no tracing or 3D captures,” Andersen said. “Not with millions upon millions of colors, but as limited a palette as I could allow. The only thing that we’ve had to do is allow rotations, but I’m just going to have to accept that.” He laughs.


This commitment is rooted in the game’s inception back in 2007, which was to showcase the advantage of 2D art over 3D—this was before the more recent renaissance of pixel-art titles, like Superbrothers: Sword & Sworcery EP (2011) and Hotline Miami (2012). Back in 2007, Andersen saw the arrival of Nintendo’s Wii as changing videogames forever more, and with it was pushed the idea that pixel art was more outdated than ever. His response was to create “a title that could showcase the medium’s strengths.” He first looked to spin his ambition off the Kid Icarus series, mostly due to rumors back then of a 3D version that was supposedly on its way, but “none of the concepts for indoor flight seemed to translate well to 3D,” according to Andersen. He saw in this an opportunity to show how 2D art was a better fit for that type of game. The concept then grew further while Andersen was playing Super Mario Bros. 3 (1988) around that time. The Racoon Suit gives Mario the ability to descend slowly after a jump, and Andersen thought about the potential in pressing the button again to fly. “I imagined you could fly pretty high, maybe find floating islands,” he said. “Those islands would be so removed from society you might not be able to understand their language.”

The concept of an ancient culture suffused with enigma was there from the start, then. The decision to base it all on an owl society wasn’t. That would come later, once Andersen had found the answer to how the protagonist of this game would be able to fly. A lot of options were considered: jetpacks, an insectoid character, even a girl that spun her pigtails as a propeller. “Then, my girlfriend suggested an owl and everything sort of fell into place right there,” Andersen said. “Owls would have their own cloaks that act as wings. Owls are also generally symbols of knowledge, and with the cloaks being something you inherit, I thought having a disabled protagonist would give him a lot to live up to.”

Despite having played Owlboy‘s first demo back in 2011, as well as the new one handed to me only days ago, I’d never considered Otus, the game’s protagonist, disabled. But now it’s been pointed out to me I can see it. Otus not only has trouble flying—which is something he is bullied for by his peers in the game’s tutorial stages—but he is also mute, which puts him at a disadvantage when communicating. All the pieces were there for that reading of the game but I hadn’t put them together. And it should be emphasized as a reading, just as was the case with Octodad: Dadliest Catch (2014), which can be seen as an “analogy for invisible illnesses.”

However, in Owlboy, there was intent from Andersen to depict a disabled protagonist through Otus, whereas Octodad was never considered in that light by his creators. That said, Andersen now refers to Otus as being “not very able,” rather than committing to the term disabled. This manifests itself in the game in a third way—that is, not through his muteness or his flying capabilities but in Otus’s inability to attack. Mario had his jump, Mega Man had his arm cannon, but Otus basically has nothing; the most he can do is perform a spin, which is more a means of defense. Instead, what Otus must do, and which is one of the central components of the game, is carry other people around with his feet who can fight for him.

In the current demo, only one of these people is seen: Geddy, who is the villager’s engineer, and who carries a pistol used to shoot enemies and clear certain pathways in the game’s dungeons. Presumably, the rest of the cast of support heroes will follow suit, offering different abilities necessary to advance from sky island to sky island. Over the years, as more and more pixel art titles have come and gone, it’s this central idea of friendship that has become the defining point of the game. Otus teams up with the people he meets as he journeys to take down the sky pirates that raided his village. They are united in purpose, and despite Otus’s shortcomings, he proves himself in other ways that don’t necessarily involve direct violence. The pixel art is, of course, a treat to look at and admire, and on a technical level it is still impressive, but it doesn’t have the same impact it would have had if the game was released nine years ago—now Owlboy doesn’t need to prove pixel art’s worth.

The team understands that the game should have appeal beyond its visuals, and so, in steadily working on the game over the years, have looked to develop the themes inherent in Otus’s relationships to other characters. Bauer told me that, at one point, the team did consider giving Otus the ability to do damage himself, but it didn’t fit. “If Otus could do everything there wouldn’t be a reason for players to think about the gunners and to almost always have them with you,” he said. “I think Otus is a dependable character in the game (especially with the player being that confidence) but without his friends he would be in over his head. Otus is still a kid and can’t do everything.”

These themes of cooperation and resolve are also what has kept D-Pad Studio pedaling away on Owlboy for the past nine years. “It’s a huge part of our teamwork,” Bauer said. It’s a small team, each member with their own individual talents, each responsible for huge parts of the game. Now, it’s all coming together so that, finally, Owlboy will be able to fly.

You can find out more about Owlboy on D-Pad’s website and the game’s Steam page.