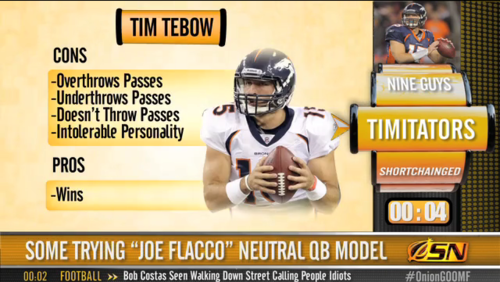 There might not be a more fascinating contemporary NFL player than Tim Tebow, an ostensibly bad quarterback who somehow seems to spend entire games trying to lose, only to not screw up at the last second and have some miracle happen. That Tebow is a staunch member of the evangelical Moral Majority only adds to his mystique, as it gives some sort of weird religious subtext to every move he makes. A recent Onion Sports Network video on Tebow points to the very real trend of NFL coaches starting decidedly Tebow-esque quarterbacks, perhaps in line with the hive mind mentality that tends to pervade professional football coaching.

Football is a game with a ruleset, but Tim Tebow’s very existence seems to defy the logic that governs the game and possibly even changing the way we view quarterbacks. Is this going to have an effect on Madden? Semi-related thought: Is EA going to include that prayer thing he does in the next edition of the game?