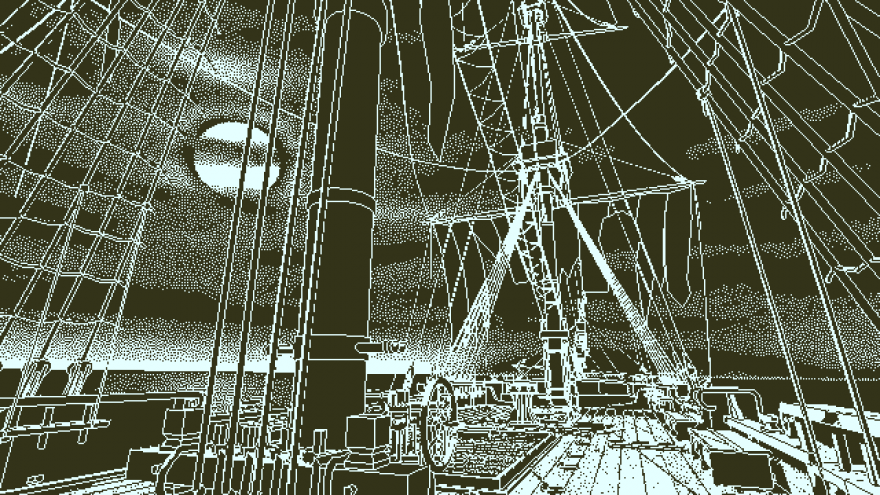 Lucas Pope, of Papers Please (2013) fame, has been working on his new project, Return of the Obra Dinn, for nearly two years now. Back in October 2014, he released the first build of the game, which ran for 10 minutes in length and showed off its stylistic 1-bit rendering. Updates on the game’s progress since then have all arrived in the form of a devlog, except the latest, which comes with a new demo to play. It features a host of improvements, such as a new intro sequence with fully voiced dialogue, a remodeled top deck, a new flashback, a small peek below deck, and a remastered OST with one additional track. It takes all in all around 15-20 mins to play this time around and is proves to be a great dose of eerie mystery solving for the week.

For the unfamiliar, you take on the role of an insurance adjuster for the East India Company’s London Office in the year 1807. When a long declared missing merchant ship, the Obra Dinn, bound for the Cape of Good Hope, quietly drifts back into port, you are called to investigate what happened to the ship’s crew. With the aid of a mysterious supernatural pocketwatch you are able to replay each crew member’s final moments of life. These moments are played out on a black screen with the sounds and dialogue of each death. You are then shown the grisly scenes frozen, for you to examine and note any details which may help you piece together identities and causes of death. This information is to be meticulously recorded in the crew muster roll book. The intersection of the mundanity and tedium of the task is contrasted with the unusual nature of the narrative.

The sounds of the scenes stuck with me as I puzzled through their movements and messages. These aural vignettes of scuffles, cracks, and shots in darkness, and the subsequent grand musical accompaniments of the halted violence, are incredibly eerie. Although distinctly grounded in a graphic nostalgia, these moments feel fresh and hit tones that I haven’t seen in any other game. The vignettes of sound are wonderfully orchestrated to help you imagine the bloody and tragic happenings. The deprivation of visuals and the lack of traditional graphics and action, give the game a distinct haunted feeling, achieving a sense of hearing voices from the past, and seeing phantom bodies in their moments of final trauma—a frozen and colorless gore. However, over and above this, the game is still distinctly operating within a genre of historical fiction—which can be easy to forget in the midst of this unusual approach.

Being South African and having studied History at the University of Cape town, the history behind ships and trade routes, which made use of the Cape of Good Hope is incredibly complex and fraught with settler colonialism, and the history of what came to be South Africa. So, for historical elements to be stripped of their context and used as a backdrop in this instance is particularly strange for me. Though Papers, Please was rooted in our ideas of the modern history of Eastern Europe, the blatant fictionalization of countries and authorities helped allow the game the room to breathe beyond its historical inspiration. Though not through fictionalized countries, Return of the Obra Dinn subverts its more factual historical elements by being placed on a fictional ship, hinting at its historical liberties. With its supernatural elements as well as with its new opening, which includes a theatrical swashbuckling voice, the game builds well beyond its historical reference point into something far more abstracted and stylized.

I am reminded of Pope’s motivation for the game, being born from a desire to make a 1-bit game that people wouldn’t feel is graphically inadequate or dissatisfying. Return of the Obra Dinn, shows these roots, of morphing the seemingly intolerable into not only a strangely evocative aesthetic, but into meaning and depth through what we expect to be mundane. Pope has and is undergoing a mammoth task, filled with trials and tribulations and a non-linear path of progress. Luckily for us, as an audience, we can simply choose to reap the results.

Be sure to check it out on itch.io and keep up to date with its developments through Pope’s devlog