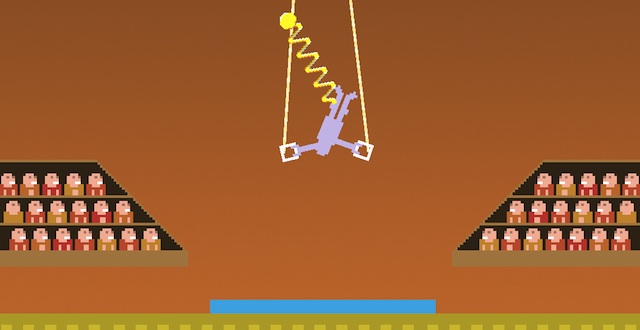 With Justin Smith’s Realistic Summer Sports Simulator, Justin Smith—who is not an athlete but a videogame developer—endorses his own sports game, following the grand tradition of John Madden Football and Barkley Shut Up and Jam!. The sports videogame endorsement, typically, is a stamp of authenticity, a sign that it met the exacting standards of one who lives and breathes the sport. Here, it is a joke: Smith’s vision of sports is anything but realistic. For those familiar with Smith’s past iOS games, the title also stands as a warning.

Perhaps you’ve played Enviro-Bear 2010, about a bear in a station wagon trying to eat enough to hibernate. The player manipulates his paw to control the brakes, the accelerator, and the steering wheel, while trying to catch fish and nuts to eat, one at a time, and frantically racing the clock. Fuck Oregon Let’s Go Find El Dorado, a play on the edutainment classic The Oregon Trail, has mountains that block the way to the west and launch your carriage into the air: the goal is to prevent the carriage from landing on its back, lest a family member come down with cholera or get bitten by a snake.

Like the work of Bennett Foddy, each Justin Smith game is about control, or a lack thereof. Their arch-irony is that a touchscreen is supposed to make things easier. Smith is making games where everything is too complicated. In Justin Smith’s Realistic Summer Sports Simulator, a collection of mini-games each based on a different summer sport, even moving is a chore. Pan-global athletes bungee to wherever you place your finger, the slightest motion whipping them across the screen, and then hurling them back like a failed cosmonaut. At best, Smith’s controls must be overcome with skilled play; at worst, they are to be endured: no mastery is needed.

In any compilation there are bound to be entries stronger than others. Call it the Coffee and Cigarettes problem. The 100 Meter Dash involves spastic flicks of the finger to send the runner flying into the air. The most successful Javelin strategy seems to be tossing the javelin and then using your athlete’s entire body to bat it as far as you can. The latter is one of the few mini-games with a sense of humor: it leads you to treat the little digital athlete as some sort of cudgel.

Most of the 14 games, however, are less satisfying. In the Rowing game, your finger moves a rowboat; move too fast, and the rower falls off, making the game one of micromanaging speed and balance. It shares one key element with actual boat rowing: It is tedious.

One game ends, quickly, and you’re shuffled into the next game. Odds are you will have forgotten exactly how to work this one. In some cases, you’ll even draw a blank on what you’re supposed to do. The game is over. You move on to the next. It feels like luck if you manage to do well at any of Justin Smith’s summer sports. This is further compounded by a lack of stated goals. The gymnastic rings competition barely makes sense to me when I watch it on television, and its videogame equivalent is no clearer. Most sports are won via trial-and-error, but there are some I have never beaten—I run, pole in hand, like Don Quixote against his giants, and … now what? I flail my finger and crash against my own windmill, forever enduring the shame of a “Do Not Qualify.”

This is an inside joke, directed at fans of Smith’s work. So why wrap a title custom-made for me around a game I can barely understand? It still begs the thrill of doing well, perhaps some hint of the appeal of the games it is referencing. Really, Justin Smith’s Realistic Summer Sports Simulator doesn’t deserve its endorsement.