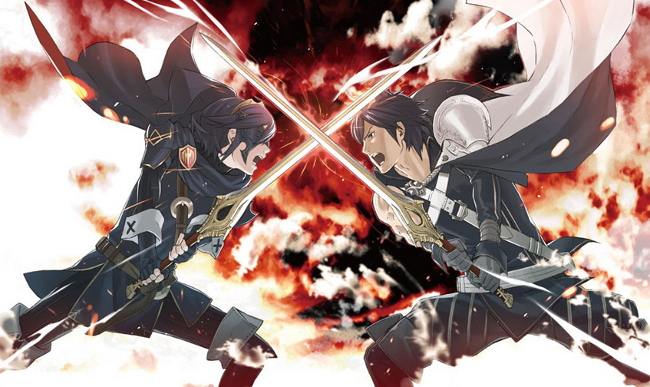 The promise of war is that those sent to do battle will not all return. Fire Emblem: Awakening is a game about the brutality of that promise, and the senseless yet necessary actions of the many when heeding the false convictions of the few. More than anything, Awakening is about those moments of inaction, and how warriors (and civilians) deal with the carnage of their choices.

Each game in this series of strategy role-playing games, beginning in 1990 with the original’s Japanese-only release for the Famicom, sets you in an ancient, fantastical world with nations at war for all the usual reasons: betrayal, revenge, money, spite, boredom. Missions force you to enact the wishes of others while developing close, intimate relationships with those being sent into the fray.

You control the movement and actions of individuals; you’re both a god and a peer, deciding the fates of those standing shoulder-to-shoulder with you as the enemy descends. When the sharpened curve of an axe chops down your neighbor, you strike back in retaliation but your friend remains gone. The battle is won; one man (or woman, or shape-shifter) remains behind, buried in the dirt.

How do soldiers cope with it all: the inexorable march into clashing swords, whizzing bullets, mortars hidden underneath a sidewalk? How does one share a meal with a companion living on borrowed time? In the face of all our failures, miseries, regrets and defections, how do they—we—go on?

We laugh. We tell a joke. We shrug our shoulders and flick someone’s ears. We spy on others bathing. We flaunt our abilities to the point of parody. We tease others mercilessly with the secret hope they’ll tease us back or punch us in the face. Fire Emblem, as a game, is a brilliant system of checks, balances, powers and weaknesses: Chess with magic and dragons. It is also the funniest depiction of needless slaughter I’ve played in a long time.

The base gameplay consists of turn-based battles on a grid overlaying a geographic map. Units have a finite number of spaces they can move, different weapons strike down certain enemies more effectively, and the environment can provide defensive cover. You view the action from an overhead perspective, scanning detailed information on the touch-screen while plotting out your steps and watching the battles unfold above.

The 3DS’s autostereoscopic 3D is put to subtle, but effective use even during the planning stages, with sunlight streaming through clouds or a shifting haze over marshland. Tiny birds fly over your troops; more than a dozen times I got caught thinking my bedroom was being invaded with gnats attracted by the light of the system’s screen.

A standby of the Fire Emblem series is a simple hierachy of weapon efficiency: Axes beat Lances, Lances beat Swords, Swords beat Axes. Layered atop the surface level rule-set is a multitude of variables, among them the ability to stand next to units and offer them help, or even pairing up two units on a single space. Add in breakable weapons, upgradeable classes, allied forces and experience points, and you have a full-featured strategy game.

Ah, but pause a moment. You do not control “units.” You aid countrymen. You encourage peers. Strangers become friends. Enemies become allies.  Your caravan are not mere pawns but people with names. And birthdays. And interests. And each are mortal.

The world of Fire Emblem feels closer to miming the reality on a battlefield than other “war” games, even with its magic spells and healing incantations. Because amidst the horror there’s still so much humanity. When facing down the evil of required murder, we crack a smile to release the pressure. Fighting isn’t all hoo-rah! and mortar blasts; it’s the bonds you make as night falls, chatting with those you’ve fought alongside.

And then when those bonds are broken by an untimely blade, the loss is far greater. But only if you move on.

The other mechanic often touted as central to the Fire Emblem experience is perma-death; if a character falls in battle, they are gone forever. Before ever trying a Fire Emblem game, this is the aspect that made me both cautious to ever begin but also exceedingly relieved. No more pretense at achieving a “perfect” game! The rules of the battlefield overlapped with that of reality. Your choices had consequences. That is, they would unless you restarted your mission and tried again. As many do.

How do they—we—go on? We laugh. We tell a joke. We shrug our shoulders and flick someone’s ears.

This was my approach: I used my three save slots as mulligans. Twice early, as I learned the systems and blindly scratched my way through battles, a member of my team fell. So I saved that paused campaign to a separate file and restarted the original.

Once all three files were used up, though, I maintained my single campaign, pushing forward no matter the heartless deeds set upon my faithful companions. I can’t vouch to absolute purity. But this gave me two shots at redemption, two shots to right the wrongs of my shaking hands or near-sightedness or stupid inattention, before setting the past behind me and moving on.

My first casualty is a knight named Kellam.

The in-game biography tells me he was born on June 24th. He died on Janurary 24th, five months before his next birthday. He fights valiantly, if little. I lose him in Chapter 4: The Arena. I was careless. As he is struck down he says, “They saw me…” as if his slayers did him a great service by noticing him in the first place. Kellam had something like low self-esteem, a hulking giant of a man who’s always lost in the background. He wondered if the others will notice him, now that he’s finally gone.

I feel bad! Guilty, even. The loss stings. But only if we carry on without him. We do.

Eventually I learn to be more careful: checking the enemy movement grid, using range attacks first to weaken foes before finishing them with zero collateral damage. Pairing up to minimize the damage to a wounded unit. Gaining extra mobility by pairing up with a speedy character, then switching to the fighter once we arrive to deal the most damage. Battle preparation is a game unto itself as you select who will join the fight, tweaking their weapons, spells, and healing potions.

Some reviewers compare Fire Emblem to chess, but it’s more like chess meets Upwords (a Scrabble clone from my youth with stackable letter tiles), drawn as a Don Bluth medieval epic, juggled with Operation: one wrong move and you suffer a painful, unsatisfying demise.

Only then to laugh through the gritted teeth of loss. This is a board game with little funny human pieces that get married and bear children and feel shame and hint at homoerotic urges and express gratitude and exhibit great loyalty. Where provocations are a “hot brand to the buttocks.” Where the thief Gaius is caught in the bath, embarrassed by what he says is a poison oak rash. Where in the throes of mortality your narcisstic archer Virion exclaims, “I cannot allow the final curtain to fall… and inflict such grief on womankind.”

Much of this chatter is overheard after the battles are over, after what usually comprises the “play” of any strategy role-playing game. But the roles here are so charming and at odds with expectations I found myself slogging through the battles just to read the interstitial conversations between each mission.

Frederick, a Great Knight who slays enemies with a powerful hammer, chats up Chrom, his master and lord of their province (and main character besides your own self-created avatar). The topic? Sleeping blankets: “If I may be so bold sire, peach would seem to best flatter your complexion.” The nights are getting colder.

Later, he describes creating a recruiting poster and posting it all over town, featuring his lord, naked, sword in one hand, scale in the other. ‘Chrom Wants You!’ it says, a medieval slant on Uncle Sam’s World War I slogan. Chrom is aghast. You, the player, never see this town nor this poster, only two talking heads spouting monosyllabic audio cues and lines of text. But through this simple frame we see a fullness of personality and unpredictable behavior rarely present in a videogame about defeating the bad guys.

It’s hard not to spoil all the fun touches to be found throughout what is otherwise a super-difficult game that punishes sloppy play and requires careful and pronounced attention. One fighter has a sweet-tooth, so much so that lollipops are stuck to his armor. Another asks a shopkeeper, “Do they sell hairbrushes?… No, seriously.”

The soundtrack mirrors this enmeshing of wartime’s profanity, heroism, and the absurd. Perhaps the music foregrounds the expected mood too transparently; a moment of levity follows the strike of a vibra-slap, for instance, or a flute’s pensive tones echo the melancholy of a fallen friend. But it’s easy to forgive the lack of subtlety because: 1) the emotional range of the narrative is so deep and rich; and 2) vibra-slap.

Decisions like these never allow the serious story—one steeped in filial pride, treachery, the greed for power—to overshadow the joy meant to be had while playing a game. You take what you wish from the vast pool shimmering beneath you: Reach in and grab a narrative-heavy story with life-or-death consequences. Or take the accessible strategy game with layered, untold depths.

Or blow through the military trappings on Casual Mode, an olive branch to beginners that disables permanent death and allows your full party to continue through the quest, and soak in the romance and humor and jollity of surprising conversation.

Fire Emblem can be whatever you prefer: A war strategy. A role-playing game. A dating sim. A comedy routine.

The developer Intelligent System’s other main series is Nintendo’s light-hearted RPG Paper Mario. This both makes sense and feels almost unfair. How can one studio create a world of paper-thin plumbers and koopa shells and another of mythic adventure and fallen empires?

But in fact, you create the world of Fire Emblem. It can be whatever you prefer: A war strategy. A role-playing game. A dating sim. A comedy routine. This elasticity is found in its tiniest crevices: animations can be turned off, actions sped up, voices muted, cameras zoomed. What for one player can be a digital board game can, for another, be a first-person battler. One might storm through the mainline story, while another explores every side mission, attacks every foe, building up their characters to nigh-undefeatable strength.

The addition of downloadable maps and quests, a first for a Nintendo-published game when Awakening released in Japan last spring, expands the scope of your quest beyond the capacity of this reviewer’s lifestyle. You could lose yourself in Fire Emblem. I’m still trudging forward, absorbing as much delight as I can in those relationships I’ve helped maintain, trying to not look back at all those I’ve left behind. You might say war never changes, nor does it ever truly end.

If such dialogue made its way into Awakening, the next scene might evoke the Marx Brothers or convey some homoerotic teasing just to keep you off balance, because people are complex and funny and confused even amidst the calamity of war. I’ll keep fighting until my band of heroes save the day, or my last drop of blood spills onto that transparent grid and my game is lost. Either way, I win.