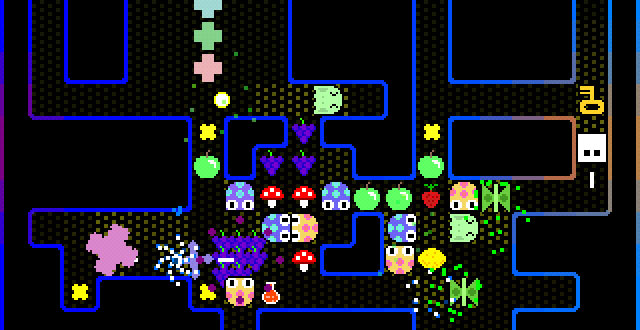 A floral title like Forget-Me-Not hints at both romance and nostalgia. The latter first: the bulk of the game is a postmodern amalgamation of retro-gaming sources. Infinite, procedurally generated Pac-Man, yes, but influence comes from Commodore 64 cult classic Crossroads too, which also features enemies in conflict with each other as well as the player.

The collection of enemies has a rich and varied genealogy. A Snake-like creature deposits slimy blocks in its wake. Zelda’s Wizzrobe and Mario’s Magikoopa begat the wizardly figure that travels with disregard for walls and fires spells across the maze. Two types of bombs can appear: one inanimate, simply rolling away from contact and exploding; the other more sentient, waddling around manically with just the hint of a Bobomb’s gait.

Other enemies, given Forget-Me-Not’s crisp pixels, are less obviously sourced. Some blocks simply roam the maze like the player, collecting items and shooting at anything in their way; some passive types will steal the key you need to collect and take to the exit; one infuriating type replicates quickly when attacked, like the simple life forms they resemble. And there are plenty more. Enemies spawn more rapidly and in greater numbers every round; sometimes it’s just one type, but usually they mix it up.

The aural effects are either ripped directly from well-known videogames of the 1980s, or from my memory of them. As the screen fills up, so do your ears; simple movements bleep and bloop, bullets pew, and onomatopoeia wouldn’t do justice to the digitized explosions. These noises quickly become cacophonous, but they represent the hectic nature of the game and act as useful indicator of the dangers at hand.

Monochrome at first glance, subsequent gazes reveal psychedelic palettes lighting up most of the game’s objects. The bright colors betray the game’s modernity, conflicting with my recollections of a BBC Micro that pumped out beige-on-black graphics.

A whole load of nostalgia, then, and you might think I’ve forgotten about the romance. But how could I? The game’s loading screen features a pixilated, blue-white neon flower, floating in the blackness of an arcade box. Rather than dots or pills eaten, the player needs to collect flowers to finish each level; presumably forget-me-nots, each one refusing to be left behind. Our square, white, black-eyed protagonist leaves behind an “R.I.P.” gravestone at the inevitable endgame.