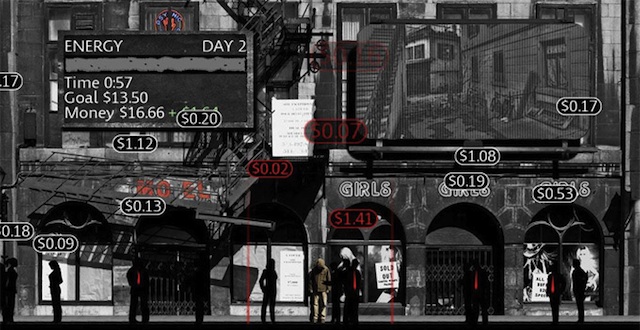 “One of the first things students film, when they get a camera, is the homeless.”

I do not remember how my old film professor got on this tangent.

“Their heart is usually in the right place, but it’s dispassionate. The camera creates a barrier between the person and the subject that is comforting and uncomplicated. They go from human beings to some abstraction.”

My fear was that Homeless, the new game from Silver Dollar Games, was going to be in this category. The first-year art show with photographs of the homeless. The student, looking very serious, standing next to a little placard that reads, “Portraits of Dignity Lost.” A cliche, if ultimately a well-meaning one. But Homeless is worse than that. It doesn’t encapsulate the issue of homelessness, but instead reduces it. It’s hard to view a videogame like Homeless as anything but crass.

Homeless is less a game and more an interactive monologue. Our character stands hunched in the middle of the screen, hoodie covering his face. Faceless passersby make their way in front of him, each with a dollar amount hanging above their head. When they get close enough, pressing A will result in some change being spared. (The game should really be called Panhandling.) There is a time limit and a finite amount of energy that can be used to reach the cash goal, and the “day” ends when either one is depleted. The screen fades, dawn comes, and the monologue continues. All the while sad strings wail in the background and a man narrates his life, telling us that he deserves this for all the stuff he’s done. He absolves us, right away, from feeling empathy.

Poverty is a systemic problem, a byproduct of capitalism that we’ve all come to take for granted. Games, as representations of systems, have the unique opportunity to show the cyclical nature of poverty. Take for example Beggar, a little-known indie game about poverty. Its designer Scott Brodie takes a more nuanced approach: Beg for change and try to stay alive with a finite amount of money. It ends up being an endless cycle that gives you enough to stay alive, but never enough to crawl out of the hole. But Beggar and Homeless both suffer from the same problem: They only tell half the story. They show life after being homeless, as if it begins in a vacuum. They focus on the results of poverty, not its causes. We hear that the Homeless man used to have a family, that he steals, that he’s done time, and that he’s done crack (along with “dope, pot and E,” a line of writing that made me cringe). We hear that he’s always wet, always hungry. “Takin’ other people’s scraps. That don’t feel right,” he says 30 seconds after telling us the best places to dumpster dive. He tells us about the rats that bite him when he sleeps under the bridge. We hear about everything except his earlier life. Of course we don’t need to know what it’s like to have a home to know that being homeless is bad, but the game offers little to suggest that this man is a real human being. What are the stakes? What has been lost?

It’s hard to view a videogame like Homeless as anything but crass.

(Oddly enough, the only major release that I can think of that manages to convey the systemic and cyclical nature of poverty is SimCity. Given a good start and the best resources it’s still possible to get into a downward spiral where money bleeds out slowly while you try to come up with stopgaps. Eventually you’re the mayor of a town that is swirling down the drain with no way out. This is much more pessimistic than, say, The Sims, which will never kick you out of your home no matter how broke your character is.)

Even with a reduced scope, Homeless still fails. Several times in his monologue, the man complains about how hard it is to get change, an act the game makes out to be effortless. Collecting money in Homeless ridiculously easy. Nobody refuses. Our homeless man has some sort of X-ray vision that lets him know the exact amount of change in somebody’s pocket. Again we have a lack of social context. What does the man do with the money he collects? What happens if he can’t make the goal? The game stops with not even a tasteful ellipsis—just an ugly “Goal not met.” As if this were his quarterly sales report.

Start again and we’re back to our faceless man. He stands in front of strip joint promising GIRLS, GIRLS, GIRLS, a large screen above it alternating between pictures of scantily clad young women, and photos of the homeless. There is no wink at the camera, no seeming awareness of this juxtaposition. Only exploitation.