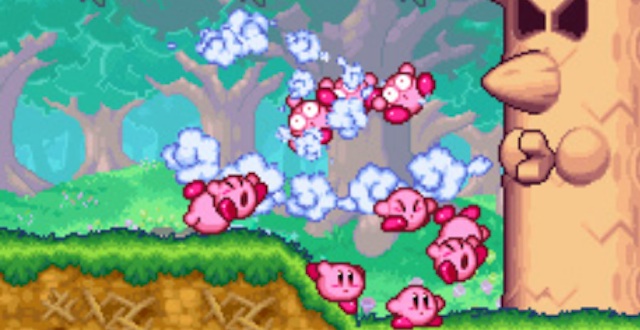 Kirby has the strangest luck. In recent outings, he has been turned into yarn and deprived of his limbs. In Kirby Mass Attack, the pink round puff, who could find work between games as an emoticon if he needed to, has been cloned—multiplied into identical laughing, winking, grimacing, shocked and dizzy pieces. With the change in number comes a change in manner. Kirby’s traditional attack, in which he inhales toadstools and plush dolls only to steal their parasols and spit out shooting stars, has been forgone in favor of a mob mentality. You control up to 10 little Kirbys, running amok like a street gang that is too cute to be taken seriously. Deep breathing has been replaced with the dogpile.

The copy-and-paste protagonist signifies a larger departure for the Kirby series. In this age, when you can download and dismiss 10 games on the App Store in the same amount of time it would take you to run through a traditional candy-coated level in Dream Land, Mass Attack seems afraid that you will get bored. One main character isn’t enough; you need plenty. The levels aren’t carefully approached, but rampaged through, as if you are ripping substance from the edge of the screen and chiseling your way through it. The only pauses come as you plunder a grocery aisle’s worth of fresh fruit from the various mini-games (like matching pairs of tomatoes), which have been jostled from a side menu into the main body of the game; and when you momentarily pummel the next wonderland creature unfortunate enough to stand between you and the next rainbow.

Mass Attack’s initiative is to never have you do the same thing twice. You rescue baby chicks who have been stolen from the nest, gasp for air bubbles as you swim through a cove, blast from cannons atop Mayan ruins, ride in elevators while guppies spit streams of water at you, swing in the basket of a hot-air balloon while dodging mean-looking spikes, topple imposing flowers, do battle with the robotic arm of a toy crane machine, and surf on stars. In case the schizophrenic activity doesn’t keep you from distraction, there are also a set of pinball tables, a cute shoot ’em up (cute ’em up, if you will), and an incredibly simple (but fun!) role-playing game.

Mass Attack is truly Kirby for the Twitter and app-game generation.

Its intention is to keep you occupied. At times, pink emblems of Kirby appear on the screen, urging you to tap them as fast as you can, as your squad builds up their might to pluck a giant turnip from the weeds. The controls are entirely stylus-based, lending the game a fidgety energy. You’re constantly tap-tap-tapping to tell your crew to charge forward, and flicking them on the backs of rabbits wrapped in mummy linen and apish goons, who just as quickly shrug them off, so that you are always in the act.

The one move that is held over from my other favorite Kirby game, Canvas Curse, is the ability to draw a line on the screen and have your Kirbys drift along it—but the implementation feels totally different. Canvas Curse slowly traced a single line of thought to its logical conclusion. Playing it felt like making graceful marks of calligraphy with the stylus. Now you quickly scribble to collect all of your Kirbys into a mass, and draw a line to lift them over a cliff as the screen scrolls forward, so as to keep some from falling behind the pack. Mass Attack feels like nervously hacking away on a keyboard after downing two double-espressos.

These excellent, but totally different, Kirby experiences bookend the lifecycle of the Nintendo DS. In 2005, Canvas Curse was the first game that convincingly showed off the touchscreen’s potential. Mass Attack may be its swansong. It is compelling how much the ethos has changed in those six years. Mass Attack is truly Kirby for the Twitter and app-game generation. It would almost be lamentable if I weren’t having such a good time.