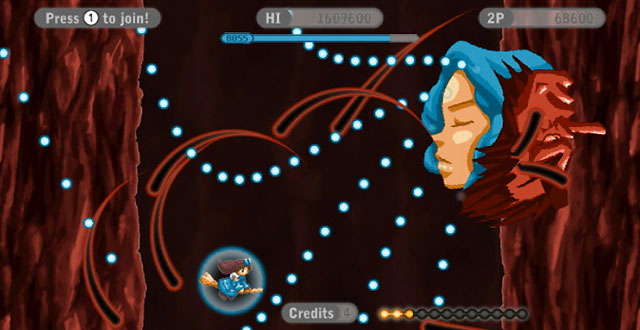 Kyotokei, a horizontal shoot-’em-up for Nintendo’s WiiWare, was developed and released by Microforum, a company based out of Toronto that also sells video-surveillance cameras and software. This may or may not be important. In today’s frenetic business climate, the ability to multitask is generally valued over the ability to, say, create an original storyline with sophisticated graphics and a unique play mechanic. Even the stalwarts of our industry have dabbled in interests beyond the scope of controllable on-screen avatars, from Nolan Bushnell’s restaurateur exploits to Nintendo’s “love hotels” of the mid-1960s. Of course, each had Pong and Mario to fall back on, respectively. Microforum’s software lineup prior to Kyotokei includes Live Strip Poker, Strip o’ Block, and Enjoy Your Massage!. This is not a company with an abundance of audience cachet.  And yet it’s done what any smart business does: found a hole in an existing market and filled the need. That gaping crevasse of unexplored potential is WiiWare, Nintendo’s home console downloadable service competing with Microsoft’s Xbox Live Arcade and Sony’s PlayStation Network.

And so Kyotokei is both WiiWare’s harbinger of doom and a rare glint of light in the darkness. Both competing services feature new, compelling entries in the “shoot-things-while-flying” genre—with XBLA’s Insanely Twisted Shadow Planet offering an atmospheric beauty unlike most, and PSN’s upcoming PixelJunk Sidescroller continuing the retro elegance of the series. Kyotokei resembles a 1991 Super Nintendo game. I don’t write this to be harsh. This is simply the best way I know to describe the visuals accurately. Granted, Kyotokei would not have been possible on that hardware; the smoothness of the background’s multi-layered parallax, and the abundance of on-screen sprites, would grind the SNES CPU to a halt. But in comparison to its contemporaries, Kyotokei looks and feels antiquated, the product of a company looking backwards for inspiration.

Elements of the user interface create the oddest sensation that you’re not even playing in the privacy of your own home. Kyotokei acts like an arcade game. Lives are called Credits. A line on the upper-right part of the screen blinks for Player 2 to join. You can’t pause. Even in a genre not known for narrative complexity, the purpose of your frantic shooting is never made clear, its nuances perhaps best left to the raconteurs of your elementary schools’ playground blacktop. Two fancily dressed anime characters stand tall on the title screen. The gentleman sports a cravat. The lady dons a ruffled dress. Each has red hair. Go.

Egyptians were ripping off their neighbors’ hieroglyphics thousands of years ago. Everything under the sun has already been done, et cetera. But a part of me begs to differ.

Hit Start and you’re flying on a bird, shooting down patterned waves of copycat enemies. Have a second player join you and she rides a broomstick—squint your eyes and you’d swear you were playing Cotton, Sega’s “cute-’em-up” featuring a red-haired broomstick rider that originally released in, yep, 1991. And gameplay depends on a whole-hog borrowing of Ikaruga’s polarity mechanic. Your opponents, including knobby mutants, cute pixies, and other nondescript fodder, come in two colored variants, red and blue. Flash between these colors: when red, you absorb all red enemy fire and build up a gauge to unleash a heat-seeking missile attack; the same goes for blue. Shoot the opposite-colored enemies and your blasts are twice as strong. Floating throughout the five horizontal levels, then, is your standard bout of Risk versus Reward, Strength versus Vulnerability. In later levels, bi-colored sprinkler sprays create a manic need to switch colors with near-constant frequency. This is no Cave bullet hell, though it rings in the same key, with fewer notes and less-interesting chord progressions.

Perhaps my focus on Kyotokei’s utter lack of flourish is unfair. Might there be a benefit to this simplicity? Difficulty has no polygon count. There is a deep satisfaction to completing a hard, straightforward game. N+ features a miniature stick-figure ninja, but the gameplay is slick and fast, the challenge formidable and inventive. The Impossible Game comprises jumping a box over a forever-scrolling two-dimensional plane. Yet players continue to sink hours and hours down its never-ending rabbit hole. Solid design will trump glittering eye candy every time.

What I haven’t explained properly yet: For all of its faults, Kyotokei is an enjoyable game. Or, rather, it borrows style and mechanics from previously enjoyable games and rides on their proven track record. The method makes sense. Egyptians were ripping off their neighbors’ hieroglyphics thousands of years ago. Everything under the sun has already been done, et cetera. But a part of me begs to differ. My chunk of brain resistant to such cynicism still burns with the warm glow possible only upon seeing artistic work that, borrowed or not, feels new. And to see a new work not even try fills me with something like disappointment.

Kyotokei, for all its simple pleasures and solid challenge, is no boundary pusher. Rather, it leans up against those established walls, content to be in the room at all. Perhaps not every game should light the world afire. Especially on a service as underserved as WiiWare. Cast even the dullest stone into a calm pond and you will cause ripples. Besides, if anyone knows how to play it safe, it’s a company that sells security.