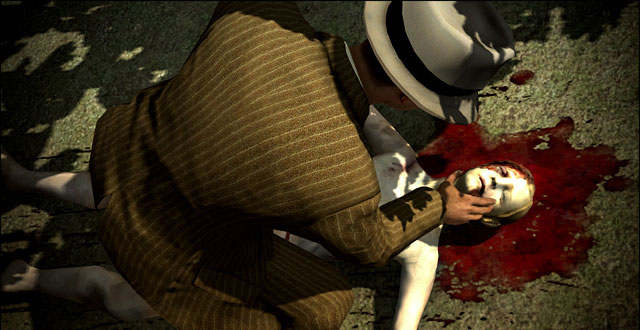 “I think his name is Phelps. I read about him in the newspaper.”

“Isn’t that the cop who caught the guy who was pretending to be dead?”

“It’s that guy from the paper! Solved the big case!”

Who are you, Cole Phelps? Broken in war, cheated by your own cowardice and bad manners. What’s going on behind that furrowed brow, those ever-widening eyes, that flummoxed frown?

Where are you, Cole Phelps? Do you honestly believe you made it home from the war in Japan? Are you really back with your family, safe and sound in Los Angeles? You go to work at the police station every day. You’re doing pretty well for yourself, climbing the ranks and earning commendations while clearing case after case. You go through the motions, examining the clues, asking your questions, and presenting evidence. You kill criminals on the job with ruthless efficiency and surprising regularity. Everyone seems happy with your work.

Sometimes, Cole, it feels like you’re living a real life.

“Phelps. That’s him. Bent cop. It was on the front page of the times.”

“That’s him! The dirty cop. I hope his wife takes him for all he’s worth.”

“That’s him. That’s the best we can do for policemen in this city.”

Other times it does not feel that way at all. In fact, as I played through L.A. Noire, I began to have what I can only call a paranoid existential videogame freakout.

Any single-player game presents an artificial world that revolves entirely around the player character. Open-world games are no different. But there is an important illusion that open-world games often maintain: that the game world is fully independent and chugs along on its own disinterested momentum. Niko Bellic and John Marston may have been the stars of their respective stories, but the worlds those men occupied didn’t appear to give a whit one way or another.

The flipside of this is that when a player chooses to actively engage with the world, it feels momentous, electric. The world was moving along on its own, but for a moment, I changed it.

Not so with L.A. Noire. This world exists for one purpose: to observe and—at limited, specific times—to react to Cole Phelps. I started to ask, who are these people around me? Why are they watching me? Why do they await my every action so patiently?

No one questioned my meteoric rise through the force; no one pointed out how strange it was that every time a case needed solving, I found the perfect evidence, almost as though it had been placed there just for me.

Their faces seem familiar, almost real, stretched onto marionettes and set into motion by invisible strings. But when I accuse them of lying, why are they so consistent in their demands for proof? Why do they move their eyes with such specific, determined shiftiness? And why, when I pass them on the street, do they speak only of me and my actions?

“He’s a waste on the police force. A good-looking boy like that should go into politics.”

“You remember Mickey and his boys were shootin’ up the town last night? Remember there was only one cop fightin’ back? He was either brave or crazy.”

“There he is! The guy from the papers. You should be ashamed of yourself, young man.”

They’re all watching Cole, talking about him; ruminating about his recent cases, his media presence, the ups and downs of his career. Those lines of ambient dialogue repeat and repeat until one can’t help but sense the watchful eye of Big Brother, the constant surveillance of the city itself.

The more I played L.A. Noire, the less I was able to accept the identity I had been given. My early accomplishments led to a swift promotion from street cop to traffic investigator to homicide detective. I learned the ins and outs of the game’s truth-doubt-lie interrogation system, and I put a half-dozen men in jail. No one questioned my meteoric rise through the force; no one pointed out how strange it was that every time a case needed solving, I found the perfect evidence, almost as though it had been placed there just for me. No one wondered why, regardless of the lines of questioning I chose, I always wound up putting someone away.

“He’s a good case-man,” my superiors would say, before promoting me yet again. And the people on the street would resume their one-sided conversations.

“That guy caught the guy who covered it up. Some sort of conspiracy.”

“Did you hear about the woman who stabbed her husband and tossed him in front of a car? That’s the cop who caught her.”

“I think his name is Phelps. He brought in the case with that poor lady, killed near city hall.”

Cole Phelps has no health bar, no ammo count, and no inventory. He doesn’t write journal entries, and has no safe house or property. He doesn’t eat, doesn’t sleep, doesn’t smoke or drink or sleep around or go out with his friends. I have seen nothing of his wife and children, his passions, his hates or his desires. He walks into a crime scene and barks his introductions like a dog, rude and abrasive; petulant and bullying. He carries himself like a child playing dress-up, weak-chinned, pale, and aimlessly angry. Cole Phelps is kind of a prick.

But when I look at what’s going on around him, I can’t really blame him. What to make of this Truman Show-esque existence, this vast, toothless city? If I were trapped in such a purgatorial nightmare, I’d probably behave badly, too.

Midway through the game, my vice-squad partner herded me from a crime scene to our car, smoothly instructing me as to where we should go next. But I was on to him. This wasn’t real; none of it was real. There was no case, there were no drug dealers. This conspiracy was bigger than narcotics, bigger than the police department, bigger than this whole damn city. I made as if to open the driver’s-side door, but at the last moment, I turned heel and ran.

“See him? I saw his face in the paper. He worked that case where the lady got cut up like the Dahlia.”

“You catch all the good ones, Phelps!”

“There’s the guy. I heard he’s an honest cop. Now there’s an oxymoron for ya.”

I dashed straight into the street, where oncoming traffic skidded to a unified stop. I paused and looked at the idling cars, their shadowy drivers silently waiting for me to get out of their way. It seemed as though they would have stayed there forever: waiting, watching. Again I ran, jumping a fence, sprinting through a yard and out the other side. Behind me, I heard traffic begin to move again.

Soon I had run more than a mile, down alleyways and across parking lots, past cars and buses and trains, through side streets and straight up Hollywood Boulevard. Cars always stopped just short of striking me; police officers made no note of my passing. I could not draw my gun, I could not use the phone, I could not even speak. I could only run.

I ran up to a steep ledge but found that I could not jump off. Nothing could harm me, no one would fight me; it was as if I wasn’t here at all. The hard edges and shiny metal of postwar Los Angeles were as false as the city’s ubiquitous movie sets.

I ran until an ordinary man would have collapsed; I ran until the illusion grew elastic and stretched out in all directions—the sheer size of this place!—then constricted and devoured me whole as I finally realized the futility of my actions. Only then did I put down the controller and let Cole rest. After a few moments of inaction, the game took control of the camera and pulled around to focus on Cole’s face—a familiar actor’s countenance garbed in a blank, perpetually befuddled expression. It was several miles back to the car, but what choice did I have? I had run all this way, and yet in truth I hadn’t run anywhere at all. I turned back the way I came, content for the moment to walk.

As I ambled exhaustedly along, I decided that L.A. Noire is not a detective story at all. It is a parable about death and purgatory, a story of forgiveness. A man named Phelps went to war. He had his share of flaws, and in the midst of battle he made some bad decisions. Those decisions had repercussions that no one could have anticipated. Some of them were terrible, but then, war is terrible.

Phelps died at Okinawa, and his soul became lost. He couldn’t move on until he found his own justice, acted out his part in a morality play born of his own cowardice and insecurity. So now he wanders a half-remembered vision of his home city, playing detective, solving cases over which he has no real control.

Cole Phelps is not looking for criminals; he is looking for absolution. He must make peace with his failings before he can finally let them go, and this gauzy straitjacket of a city will not let him rest until he has done so. L.A. Noire asks not for players’ help or guidance in this matter; it asks only if they would like to tag along.

Halfway to my car, I passed a lone woman and overheard her say to no one in particular:

“I recognize that guy from the papers. He’s a cop.”