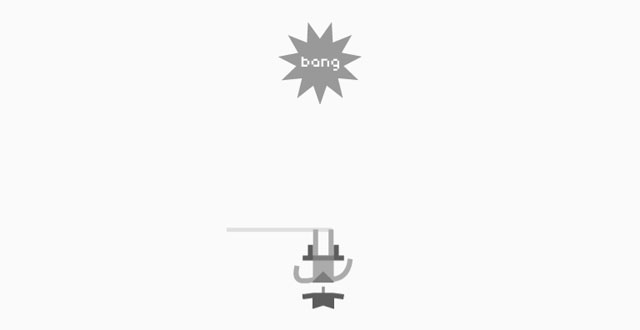 In film, Westerns have become less about the setting and more about shared motifs and thematic elements—a landscape of antiheroes, cynicism, and lawlessness. Take, for example, No Country for Old Men, which, despite its setting in contemporary Texas, is perhaps the great modern Western. But for me, the defining feature of a Western is the violence. Or, better put, those tense moments leading up to the violence. Standoffs are the heart of Westerns: the closeups of squinted eyes below the brim of a hat, fingers approaching the holster, the bang that happens so quickly you’re not sure who shot whom.

Ready Steady Bang is a simple iOS game that puts two players in a standoff. It makes violence cute, and yet it embodies the best moments in Westerns. Ready Steady Bang also strips the Western of its setting, opting for a pleasing, minimal white-and-gray aesthetic. The only reminder that this is a Western is that the characters are wearing cowboy hats. In a mechanical voice, the game counts down from “ready, steady, bang.” The first player who taps the screen shoots first. Only one player wins, but both are rewarded with one of 31 goofy death animations.

The “bang” is randomly timed—sometimes there’s a long gap after “steady”; sometimes the “bang” happens immediately. But the game’s best moments are in the long, drawn-out lulls: two people staring intently at the screen, fingers tensely perched on opposite sides of an iPad, anxiously waiting for the “bang.” It’s tremendously fun dueling friends.

If Ready Steady Bang has an opposite, it’s Red Dead Redemption. With its expansive, richly imagined environment and narrative ambition (even by Rockstar Games standards), Red Dead may be the great Western game of this generation. But the one place Red Dead gets it wrong is the dueling.

Only one player wins, but both are rewarded with one of 31 goofy death animations.

Simon Ferrari nails it in an earlier piece for Kill Screen when he criticizes the game’s “Dead Eye” mechanic, a system that gives players an edge on the bad guys by letting them aim in slow-motion. To win, the player must fire more bullets than his/her opponent. Winning a duel in Red Dead feels a bit like cheating. It’s hard to feel satisfied shooting first when you overpower your opponent by so much.

Considering how important standoffs are to Westerns, they come up infrequently throughout the game. But when everything else about Red Dead is so thoughtfully executed, it must have been a deliberate choice to relegate duels to a mini-game. Perhaps there’s no way to translate dueling in a game that’s as big and ambitious as Red Dead Redemption; perhaps a mechanic that relies solely on timing would be disruptive in a game that’s focused on storytelling and atmosphere.

Maybe the tension of a standoff can be best expressed in the simplicity of an iOS game. Ready Steady Bang is less sophisticated than Rock-Paper-Scissors, and yet it’s a blast because it understands that standoffs are moments of hyper-linearity. There are only two outcomes, determined by a single action.

There’s a single-player mode in Ready Steady Bang that lets you face off against 10 different computer opponents, but it feels like you’re playing against a clock. Against a friend, your pride is at stake. You can see your opponent’s hand shaking slightly. And suddenly you realize that your hand is shaking too. The air is thick in those seconds between “steady” and “bang.” Standoffs are about reflex. You get one bullet and a split-second to shoot it. So does your opponent. Now let’s see which one of you has the quickest draw.