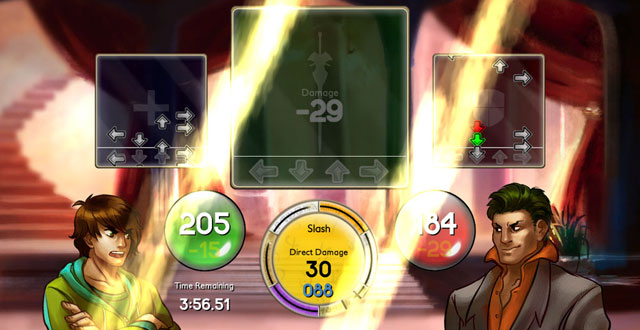 Sequence wasn’t a bad idea. It was just a risk. Surely there are reasons that the role-playing and rhythm-game genres have never been combined. In spite of this, Iridium was convinced that it could be done, and invested heavily in the concept—adding a story that is interesting and entertaining, surprisingly good voice acting for an Xbox Live Indie Game, and beautifully hand-drawn visuals. On top of all that, it came up with a presentation that fit the new genre.

This is primarily an RPG, complete with an extensive inventory, item crafting, leveling up, and spell casting. But the combat consists of rhythm-based battles. You fight off monsters by hitting buttons in time with the music. At first glance, this is little different from Dance Dance Revolution without the dance pad.

The 100% is the holy grail of the rhythm gamer—it represents true mastery, in dance, singing, drums, or fake guitar. This is not so in Sequence.

Sequence makes that tired mechanic seem fresh by embracing its role-playing elements, integrating them with the battle interface. Instead of a single string of arrows, you are actually presented with three different windows, which you must juggle in order to stay alive while defeating the monster. One pane is the “defensive” window: don’t mess up and you won’t get hurt. Another pane allows you to collect mana for spells. Casting a spell involves more than simply pressing a button, however. You must correctly execute the spell in the third pane. If you miss a single button, you lose the mana and fail to harm the monster. It’s probable that, at least for the moment, you’re screwed.

Most music games—and most videogames for that matter—encourage a certain amount of perfectionism and completionism. We strive not to finish the song, but to perfect it. The 100% is the holy grail of the rhythm gamer—it represents true mastery, in dance, singing, drums, or fake guitar. This is not so in Sequence. Sequence is about just getting by; even the rewards aren’t guaranteed. There is a certain chance that you will obtain any of three possible objects after defeating a monster, but there is no guarantee.

Getting a 100% on a song is simply impossible—with different panes becoming important to focus on at various times, there are always notes being missed, often entire phrases. Missing notes in the defensive pane instills a painful sense of loss and dread, but it’s one you must endure to ultimately win the battle.

It’s that inevitable choice—to forgo immediate security and perfection for something bigger—that makes Sequence such a unique rhythm-game experience.  Even outside of the battles, the game constantly asks you to give up one thing for another: every item that’s crafted means a loss of multiple items and experience points. In order to do something as simple as progress to the next level, you are forced to give up precious inventory.

Sequence‘s ability to force a series of difficult strategic decisions is really what the game is all about. You may go in without much thought, but ultimately this game is going to force a choice. You’re going to have to take a risk.