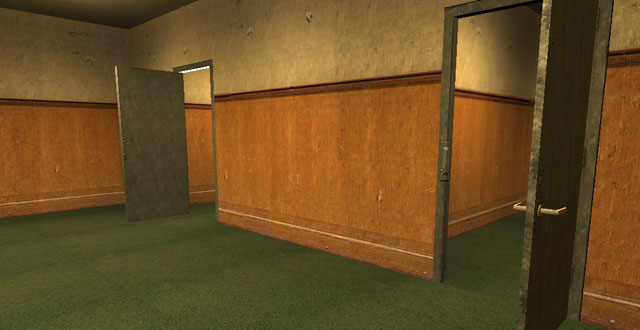 I remember as a teenager hearing this really sexist joke.

The guy who told it meant it to be sexist. That guy is a dick. I used to like telling the joke because it’s so ridiculous, so over-the-top, and (most importantly) such a bad joke that it becomes a source of ridicule. I once told the joke, jokingly, to a high school teacher of mine. She laughed. “It’s a feminist joke,” she said, explaining that, in a modern context, said by feminist to another feminist, it could be interpreted as a dig that even after decades of progress, it’s still (unfortunately) a man’s world.

The Stanley Parable is less a parable and more a joke. It works because it’s surprising, and just like a joke, dissecting it drains its power. So, I offer you a fair warning and a download link.

Here’s the setup: A man goes to work. He presses buttons for a living. When he stops receiving orders he decides to investigate. The punch line depends on what you do from there.

The joke is delivered in an English accent. That’s a joke on top of a joke: when it comes to narration English accents are simply better (unless you’re Ron Perlman or Morgan Freeman). Compare Sigourney Weaver’s Planet Earth narration to David Attenborough’s. Who do you trust more?

The narrator (voiced by Kevan Brighting) tells us, the player, that Stanley is off to find his coworkers, and we instinctively follow those orders because, as established, they’re said in an English accent, and because that is just what we do. The components in the Stanley Parable are all familiar; it’s a Half-Life 2 mod with no gunplay. But our dirty little secret, as gamers, is that no matter how many games we play, there will always be those first few desperate seconds of disorientation. Every time we start a new game, we are like six-year-olds being thrown into a pool, asked to swim by a callous teenaged swim instructor. So when the narrator tells us that we walk out into the hallway, we grasp onto that, or else we seize up and drown.

It’s only when we get to a fork in the road—an office with two doors—that we suddenly get a little uncomfortable. The narrator tells us that Stanley went—past tense—through the door on the left. One colleague described playing the game and going through the door on the right; and when the narrator quickly covered up for Stanley, giving him another route to get back on track, he took it. Maybe he felt bad betraying the narrator. Maybe he wanted to hear the end of the joke.

If you go along with the narrator to the bitter end, you get a happy ending. You arrive at a courtyard, free from the oppressive and ugly hallways. The game wrests control from you, the narrator says that Stanley lived happily ever after, and the punch line, Frank Sinatra’s “My Way,” plays over the credits.

Every time we start a new game, we are like six-year-olds being thrown into a pool, asked to swim by a callous teenaged swim instructor.

But play again. This time you are assured, confident. You know this game. You know its tricks. You know how to swim. So you take the door on the right. And you cringe when the narrator gives you an out, but you just keep going. The narrator tries to cajole you, tries to get you back on the right track. He manages to trap you and punish you for disobeying him. The setup is the same; the punch line is completely different.

The Stanley Parable‘s greatest feature is that it allows for so many views of the same joke: it’s all about the relationship between author and character. Note that we, the player, never get entered into it. For all its fourth-wall breaking, the narrator of The Stanley Parable never explicitly acknowledges the existence of the player, only Stanley. This isn’t the traditional battle between the player and the system; this is the story of author and subject.

All interpretations exist at once, all of them equally valid. By sacrificing a single, focused ideology, Davey Wreden, the designer of the game, exposes what’s problematic and exciting about game design: the ongoing negotiations between author and player. They are given a voice in the Narrator’s pleading and threatening and reassurances, and how we choose to react and rebel against him. Wreden’s best joke, in a game already filled with dark laughs, is a self-deprecating one. His Narrator, a stand-in for himself, is only interested in delivering Stanley, us, the player, to the blandest-possible ending. It’s only in contradicting the narrator that we get to the interesting stuff. Ultimately, Wreden is undermining himself, shrugging his shoulders and saying, “What the hell do I know?”