This article is part of a series called Shut Up, Videogames, in which critic Ed Smith invites games old and new to pipe down, or otherwise. In this edition, he looks at Vagabond Dog’s cut throat RPG Always Sometimes Monsters.

“Set out on a cross-country journey to win back the love of your life and endure the hardship of making story-defining choices that affect your life and the lives of those around you.” 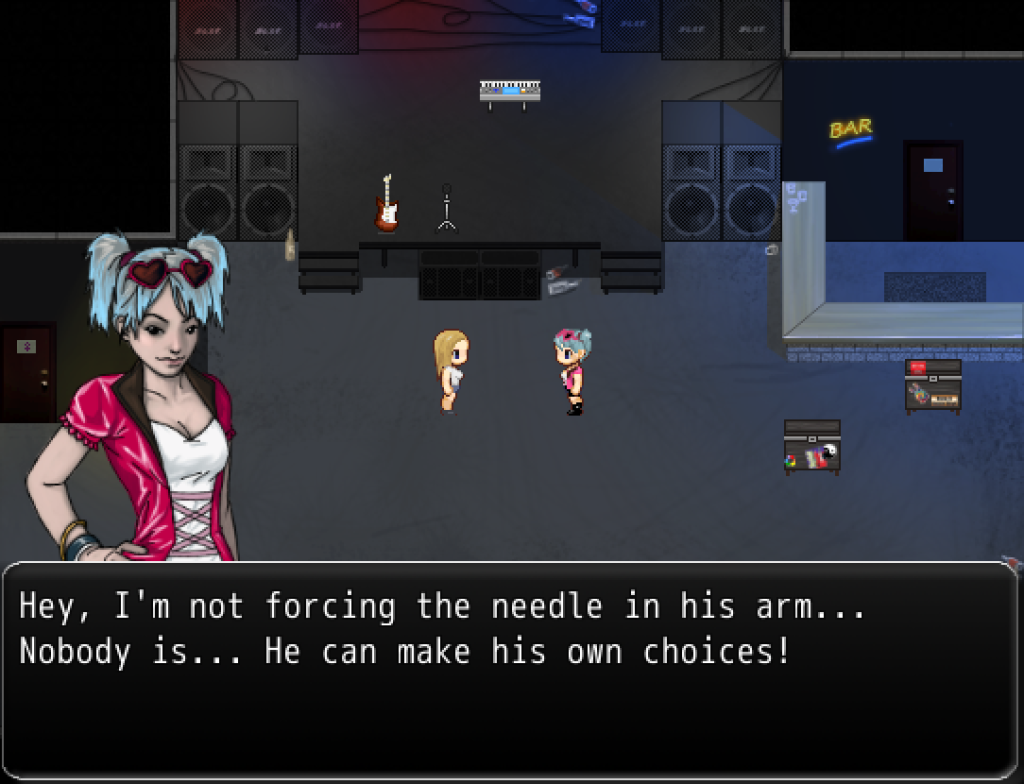 Always Sometimes Monsters purports to be a game about struggle, about the fight to make money, keep friends and win the love of your life. But it’s written, seemingly, by people who haven’t lived a day in their lives—if the people at Vagabond Dog have experienced any kind of hardship, it doesn’t come through in their game. What you have instead is blind cynicism and easy nihilism, the kind of try-hard, adolescent, sub-Travis Bickle bullshit typically associated with Grand Theft Auto. In an early scene, the ex-girlfriend of your recovering heroin addict best pal approaches you in a nightclub, saying she’s got something to share with her former beau. “It’s a baggie of heroin,” she says, as if that’s how people talk. Later, when the ex-boyfriend is in hospital, and the doctor is refusing to treat him because he doesn’t have insurance, you break into the doctor’s house looking for blackmail material, and find an image on his computer of him dressed in bondage gear, held on a leash by another man wearing an animal outfit. There’s a scene in a strip club. A few characters make racist remarks. As part of a labor dispute, someone takes a shit on the boss’s car. Always Sometimes Monsters is trying to be grubby, and street, and authentic, but it’s the videogame equivalent of a teenager’s first mustache, eight hours of privileged, sheltered white guys affecting worldliness.

it’s written, seemingly, by people who haven’t lived a day in their lives

It’s a game written around the victim mentality of people who think they’re creative, and that that creativity is precious and valid, and deserves deference from the rest of the world. Almost every character—from your publisher to your college roommate, and basically everyone who asks you to do a job—tries to backstab you or at least has some amoral purpose. There’s a token effort to characterise the budding-novelist protagonist as lazy and entitled, but ultimately Always Sometimes Monsters empathizes with his or her failures, while everyone else is made to look a one-dimensional villain. Particularly telling is a scene where you’re given a job shifting boxes in a warehouse. A big digital readout on the wall (just like real warehouses don’t have) tells you how many crates you’ve carried, the implication being that eventually you’ll fill your quota, get paid and be allowed to go home. But the scene carries on ad infinitum—you can never, ever finish moving the boxes. And the insinuation is that manual labor is for suckers, that working that kind of job is pointless and unfulfilling, since it’s not in direct service to your treasured creativity. Despite Always Sometimes Monsters‘ verite pretensions, it couldn’t possibly fail more to represent and understand human experience. That warehouse sequence tacitly intimates that the work and lives of people who don’t belong to an incredibly exclusive and protected group of Creatives have no meaning. The working class are boring. The poor are boring. If you have a creative spark, you shouldn’t muddy yourself in blue-collar work—it’s below you. Always Sometimes Monsters smacks of this entitled, bubble-shielded attitude, the kind of pathetic “I don’t have to because I’m a poet” exoneration that, again, I’d normally expect from teenagers. When I first started writing, to support myself I worked in a warehouse carrying boxes. And I like to think it taught me not to write petulant, patronising, aloof crap.

I don’t think the people at Vagabond Dog had much confidence in what they were writing. The developers appear in-game, as themselves, discussing a videogame script over coffee. “We can use metaphors!” they jokingly proclaim. “So meta.” The fact they turn their own writing process into a joke, and themselves into comedy characters, smacks of insecurity. It’s not the kind of assuredness and dignity I’d expect of writers of genuinely urgent fiction—it’s pre-emptive deflection of criticism, an attempt to downplay the seriousness of their serious subject matter game lest anyone start to pick fault. The same goes for including, as characters, fictionalized versions of real videogame critics. Susan Arendt from GamesRadar, Brian Crecente from Polygon and Jim Sterling all pop up in one scene, and although I can understand low-budgeted studios trying to ingratiate themselves this way to the gaming press, it reeks of obsequiousness. Always Sometimes Monsters feels constantly aware of its own incongruity, the writers never reconciling the fact that they’re discussing people and issues of which they seem to have no real experience. The ludicrous, affected seediness is testament to that, as are these knowing, post-modern references, which frame the game chiefly as a laugh and dodge, rather than genuine insight. What masquerades as an encompassing human story is more a portrait of the shy, unadulterated and porcelain sensibilities that predominate a lot of modern videogames, and make for removed, uninteresting writing.