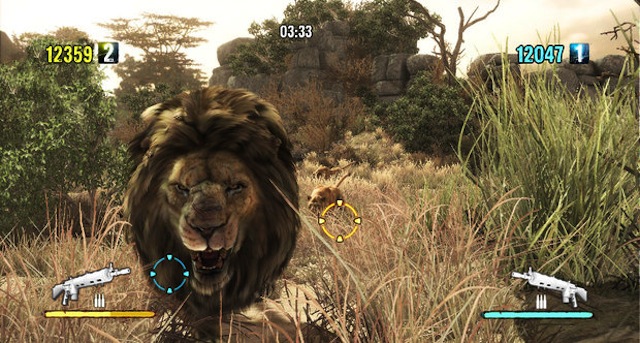 One day before high school soccer practice, I went to my car and there was a deer foot on the hood of it. A kid on my soccer team had killed a deer over the weekend, and he’d taken various parts of the deer and had been tricking people into touching them. I have no idea if this is a common prank in the South, but we were teenagers and didn’t really think it was anything except awesome. Later, that same kid took the same deer foot, stuck it up the sleeve of his sweatshirt, and pretended it was his hand, to terrific effect.

That encounter with a portion of a recently-deceased deer is the closest I’ve come to IRL hunting. But look, I’m from North Carolina. I value deeply the vague sense of superiority I get from asserting what little Southernness I actually have upon my cohort up in New York. In other words, I was actually pretty psyched to get to demo two new games from hunting brand Cabela’s, Dangerous Hunts 2013 and Hunting Expeditions.

Let me first observe that the concept of a “dangerous hunt” is inherently an absurd one. The point of hunting is to make it as safe for humans as possible, while maximizing the danger that animals are in. Hunters have opposable thumbs, beef jerky, and, most importantly, guns. Animals are really dumb and have hooves. If an animal comes up on you, you can just shoot at it and it’ll either run away or fall down. If you do it right, you’re usually going to be fine. My dad knows a woman who killed a bear one time. She gave my family a bunch of bear meat. We made stew out of it.

These were the thoughts running through my head on Friday afternoon as I sat in the office of a marketing company in Midtown, watching two very nice product marketers play their videogames at me. The idea of the hunting games in the Cabela’s series is ostensibly to recreate the process of hunting as accurately as possible. You get a little plastic gun called the FEARMASTER (capitalization mine) that measures your heart rate and adjusts your accuracy level if you’re a little jittery. It was a cool idea, but the vibe of hunting accuracy was negated slightly by the fact the product marketers were fighting off a pride of lions with their plastic gun.

I asked them if it was legal to hunt lions. Yes, they said, in certain parts of Africa.

When I got a chance to shoot some lions on my own, I nailed the first one who came across my path. This scared the rest of the lions off, so I ferreted around the area looking for some more ammo, until more lions magically showed up and ate me. The full potential of the FEARMASTER was not engaged, because my heart rate was normal until the lions were right in my face, when I didn’t have a chance to aim because my poor little digital avatar was too busy being ravaged by angry lions. I was eaten so fast I didn’t even have a chance to get nervous.

I switched over to Dangerous Hunts, in which I repeated the process in a valley with an angry pack of wolves. From my short experience with the games in question, I would label them “fun,” and also “difficult.”

The point of hunting is to make it as safe for humans as possible, while maximizing the danger that animals are in.

As with even minor events held in the pork-laden gaming industry, there is an ulterior motive for journalists to go and cover things like these, and that is that ever single writer I know is super cheap and likes free stuff. Cabela’s delivered huge in the “free stuff” department, lacing me with a Cabela’s hat, a camouflage thermos, and a bag of beef jerky. The thermos is as good as any other thermos I have ever had, the beef jerky was delicious and I have worn the hat probably four times.

The point of giving me these items was basically the same as Dangerous Hunts 2013 and Hunting Expeditions—while none of these things are direct hunting equipment, they all impart a sense of “hunt,” allowing me to spend the rest of my day a bit more ruggedly. However, hunting’s not about that. Hunting is about sitting in a tree for six hours and maybe waiting for a deer to waltz by you so you can shoot at it. You commune with nature, and then kill it. You can recreate an act, but try as you might you can’t replicate the unique feelings that come with it. You can, however, coin the term “Fearmaster,” and for now that’s going to have to be good enough.