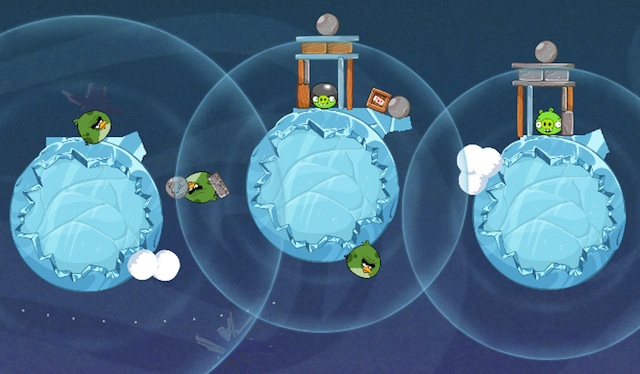 From Georges Méliès and A Trip to the Moon to Ian Fleming making James Bond have sex in zero gravity in Moonraker to the Flintstones going to meet the goddamn Jetsons, “Fuck it, let’s send ’em to space!” has been the rallying cry of creatives who were bone-dry in the idea department for basically ever. The idea behind all of the extraterrestrial detours is, basically, that space is crazy as shit. Even a boring person is interesting up there—it’s a mysterious, scary place, and something terrible can happen at any moment. It is kind of like the show Survivor. This must be why NASA chose to televise the Moon Landing—Neil Armstrong was boldly going where no man had gone before, but also he could have just stepped onto the surface of the moon and exploded. Who knows? It’s space.

So, then, why send Angry Birds into space? The near-ubiquitous iPhone game has been helping people kill time on the subway, goof off in class, and politely ignore their significant other for nearly two years, spawning such glaring signifiers of the triumph of late-period capitalism as a toy line, gummy candy, and a film adaptation (sort of) in the process, as well as several follow-ups to the original Angry Birds that showcased the same birds basically doing the same stuff that they’d been doing already. When you’re suffering from a creative drought three games in, sometimes the only way to make it rain is to go to space. But perhaps more importantly, why did Rovio send the birds into space and not give them helmets?

I understand that I am raising a fairly nitpicky complaint, especially considering that this is a game about launching flightless birds into the air with a slingshot, so that said birds may act as projectiles, bringing swift vengeance to the green pigs who have stolen their eggs but now await their fate motionlessly, Zen-like in their complacency. Space is many things to many people. It is the final frontier. A place where no one can hear you scream. A place that the jazz musician Sun Ra told everyone that he was from. A place that—once adequately tamed—will be yet another symbol of humanity’s inexorable march into the future. But space is also a vacuum. Space is a place where if you slingshot a non-helmeted bird at something, you should also be shooting a very dead bird, one that has suffocated on the harsh vapors of reality.

My best conjecture for what would happen if you shot an immediately dead bird into space is that it would keep going forever, slowly getting covered in more and more Space Dust until it became unrecognizable. Then, one of two things would happen. The bird would either drift until it accidentally threatened to destroy the Earth à la V’Ger from the first Star Trek movie, or it would just get sucked into a gravitational field somewhere and be forgotten forever. Either way, no eggs would be recovered, and no pigs would be destroyed. There is all this fantastical, amazing stuff going on in Star Wars, too, but it’s rooted in a coherent internal logic. It should be noted that the pigs in Angry Birds Space are given air bubbles to hang out in. The birds have nothing. I call foul. Or, I suppose, fowl.

Perhaps I am delving too deeply into Angry Birds, but a tension between the poles of believable and fantastical is what makes space such a magical setting. Angry Birds Space is all middle, no extremes. Without absurdity pushing up against the obvious dangers of space, it doesn’t work.

It should be noted that the pigs in Angry Birds Space are given air bubbles to hang out in. The birds have nothing.

My issue with ABS (it should be pronounced “abyss”) is that Rovio had absolutely zero interest in doing genuinely crazy stuff with the birds. See, part of the reason that space works so well as an entertainment trope is that it turns everything upside-down. In zero gravity and recycled air, such activities that we take for granted as making food, going to the bathroom, and having sex all of a sudden become herculean tasks, sort of like what happens when you’re really high. Ashton Kutcher and the actor who played Stifler in American Pie could have found their car in 10 minutes in Dude, Where’s My Car?, but they were stoned. Imagine how hard it would have been for them to find their car in space. Rovio clearly did not think outside of the box when making ABS. It was not particularly interested in having the birds explore space, or making them try to have sex, or find cars, or even form a tribal alliance to oust the physically weak but almost sociopathically charismatic bird (the little red one, obviously). Rovio just wanted an excuse to break its own rules.

See, the primary conceit of ABS is that since the birds are in—ahem—a space-like environment, the satisfyingly believable slingshot arc of the original Angry Birds game gets thrown out the window, and is replaced by two new gameplay mechanics. One, in “zero gravity” you can shoot your birds linearly, sort of like you’re shooting a cue ball in pool. Two, there are “gravity fields” (I made that term up) that wrap around planets of varying sizes, and cause your bird to orbit them, sometimes following a trajectory similar to that of an angry terrestrial bird, but most of the time not, instead circling these gravity fields and either flying away or spiraling around them for perpetuity. It can require projecting maddeningly complex flight patterns to pop even a solitary pig. It’s not nearly as fun to play while drunk.

Essentially, what Angry Birds Space offers the player is the same basic look and feel of an Angry Birds game, while asking that they think about the game in two different ways. It’s analogous to asking fans of regular-sized Cheetos to also enjoy the larger, puffier ones that tend to stick to the roof of your mouth if you eat them too quickly. This is fine. Some people prefer one type of Cheeto to another. Me, I just want to eat whichever ones are actually in space.