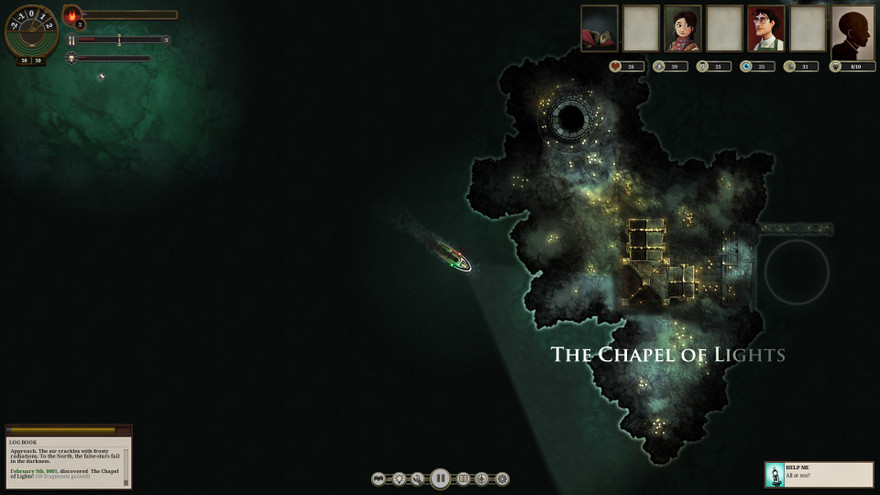 My first captain, some wet-behind-the-ears philosopher Britishly christened Heath Cliff, drowns in the wreck of his ship in the still dark waters of Sunless Sea’s subterranean ocean. Clarissa Harlowe, his successor, perishes under fire from a Satanic dreadnaught in the far south. I pluck an orphan from the seedy underbelly, name him Captain Oliver Twist (because Victorian London), and eventually watch him starve to death, utterly mad, in a dark castle that exists either in his mind or in some unreachable corner of the ocean.

I resolve to stop trying so hard. Madam Elizabeth Bennet, a retired heiress out for her father’s bones, inherits the sea chart of the previous three captains and sticks to the easy ports. She carefully threads the straits to find the foreboding Mutton Island, where the shepherds seem strange. She stops in at the monumental Salt Lions, slowly being chipped to nothing. A brief stop by the Iron Republic, peopled by demons. Running low on fuel, she returns to Fallen London to buy more supplies. The premise of Sunless Sea is that Victorian London has sunk into a dark mezzoterranean expanse somewhere between hell and the sunlit world above.

Ashore, it’s easy to get entangled in minutiae. Madam Bennet recruits a sigil-ridden navigator and buys a better cannon for her creaky steamboat. She accepts a generous “gift” from a blind man with a knife and enjoys a tryst with a dapper gentleman after a night of partying. Sunless Sea is all about indulging: I treat myself to whatever rewards are available ashore but inevitably succumb to the hypnotic drive to explore. Further up and further in. The vast darkness of the unknown lingers in large clumps on my sea chart, inviting my ship to penetrate.

Somewhere between hell and the sunlit world above.

Madam Bennet and I have a good run. We take tea with a devilress on the slopes of an underground volcano. We blast pirate ships to oblivion at the lip of a maelstrom. A civilization of animal people. Somewhere, in the vast dark, we come upon an island of postmen, where all the discarded mail washes ashore like so much flotsam. There is so much in this dark underground world to find, and so little fuel to keep our ship moving, so few supplies to keep the crew from starving to death. About two days’ journey shy of Fallen London, the engines fail and the supplies give out, and we are forced to abandon ship. She never makes it home.

My fifth captain, Captain Sergeant Pepper, is a retired naval officer and Madam Bennet’s longtime rival. The sea is starting to feel too familiar, so I discard my old chart and take to the blank unknown with a reckless abandon, surveying port after port before returning to London. We stumble upon a cathedral of lights, staffed by cannibals. An old house, empty except for three strange sisters who tell odd stories. The animal people (again). Even as I grow more familiar with the world, it seems no less strange and wonderful.

Naval combat in Sunless Sea (as in real life, I imagine) is annoyingly obtuse. With my pitifully slow boat, I can engage in a torpid clockwise dance around enemy skiffs, taking an occasional potshot, but I can barely scratch well-outfitted vessels before their torpedoes and aft-guns might reduce me to scrap metal. Combat is a matter of survival more than anything else. I switch off my lamp and weave through narrow banks to evade a crab the size of a football field. An iron-bound shark darts after me and I expend a whole unit of precious fuel to power away. It nudges my hull—just a love tap—and nearly sends Sergeant Pepper and his crew to the depths.

As Pepper and his crew start to rake in more cash, I get paranoid. I sell of the upgraded engine and guns, buy a house, and let Sergeant Pepper retire in obscurity. One of his crew, a poet named Elton John (too easy, I know) takes control. The open sea is a canvas for his passions. Before we’ve left port, he’s already seduced a hook-handed magician and loaded the hold with mummies for delivery. We’ve scarcely found the northern reaches when, slowed by the cold, a living iceberg shatters the hull of the boat and everyone drowns.

It is appropriate that Sunless Sea opens with a quote by Joseph Conrad: the game is Heart of Darkness if it were written by HP Lovecraft. The towering mushroom populated by gloomy savages is a metaphor for decayed masculinity. The serene moths that glide through dark reefs are a way to remind you that nothing is safe and, by the way: we all die alone. The map is populated with dangers and curiosities, but the decisions and route your captain takes are more character sketch than anything else. The rewards for a job well done or a story completed are most often secrets or stories, which are not so much rewards as they are keys to other experiences.

Sunless Sea is ultimately a chronicle of tragedies. Success is dependent upon you building up achievements, stacking your legacy high enough that the next captain can set sail with a proper cannon and better rig, which is in turn entirely in service of exploring whatever remains in the vast darkness out East. As someone who played Skyrim and spent hours wandering every square inch of the underground kingdom in Blackreach, I found Sunless Sea’s heady darkness appealing. We live in an age in which everything that can be found gets a tumblr, and everything that can be cared about gets a hashtag. Everything in the day-to-day has a map already, and so the imagination has become another frontier. Thankfully, Sunless Sea’s writing is velvet enough to excite the imagination several times over.

Sunless Sea is ultimately a chronicle of tragedies.

In a return to form, I name my sixth captain Samuel Pickwick. Gathering just enough fuel and goods, he sets sail south for a canal, and spends almost all his fuel on an ill-advised voyage to the surface. As each turn ticks by, I watch his crew slowly desert him as he sits on sunlit verandas and drinks wine untainted by fungi. Soon he is the only one left. With no fuel or supplies to make the journey back down, I let him retire peacefully beside the Mediterranean. It’s a tragically appropriate end for my own legacy, I think. Captain Pickwick lives out the rest of his days in a sunny paradise, plagued by his own curiosity, wishing he could explore the far reaches of the underground sea. And for what?