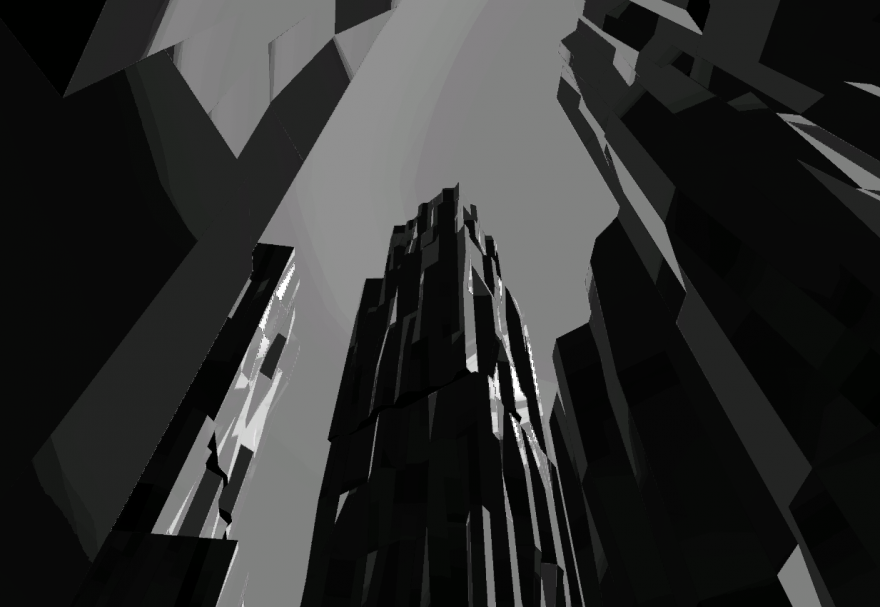 The Tower Inverted is a game in the same way that a leisurely stroll through the park can be a game: Who knows what you’ll find?

Those towers are the real attraction in The Tower Inverted. The game’s ostensible goal is to find the path to the next level, but that is hardly a challenge. “Generally,” its documentation notes, “the exit for each level can be reached by going straight ahead from the starting point.” While you’re proceeding in a straight line, you might as well take in the sights; look upwards and arise the towers that punctuate the landscape.

Although The Tower Inverted is, at its core, a stroll through the landscape, it is not a walking simulator. Its purpose is more specific. The game, to borrow a term from Le Corbusier, is an architectural. It is a carefully designed trip through a sequence of spaces, each level building to a specific conclusion. You can therefore approach The Tower Inverted’s levels from whatever angle you want, but they generally work if you just keep moving forward. The globes that float through the sky like electronic snowflakes direct your eyes as you march forward. Everything is a hint. Everything instructs you to look to the sky.

Everything instructs you to look to the sky.

The heavens in The Tower Inverted are largely empty, pierced only by the sun and the occasional tower, but there could be so much more to see when looking up. The game’s focus on the potency of overhead spaces is reminiscent of “Air Ops,” a 2013 proposal by then-Harvard University School of Design student James Leng. Responding to Hurricane Sandy, Leng proposed the creation of an overhead structure that would tie together all the buildings—many of them towers—on a block. The resultant structure would move a number of functions above street (and water) level and its city block-sized roof could capture significant solar energy, thereby creating a system that approaches self-sufficiency. Leng’s final proposal looked something like a low-poly cumulus cloud.

“Air Ops” had as much to do with planning as it did with design specifics. Zoning paradigms presuppose that buildings do not float atop one another or regularly connect above ground level. (This is a broader issue with how we think of space; above a low altitude, space is not really owned.) To that end, Leng proposed:

The Tower Inverted, though it does not implement any of James Leng’s ideas, also encourages its player to think about the space overhead. The air in the gameworld has a similar thickness to the ground level. The whole affair is a bit weightless, but it leads to the conclusion that buildings in the air, like clouds, could work. The Tower Inverted has assembled a series of entrancing architectural promenades. If only they concluded with “Air Ops” coming into view.