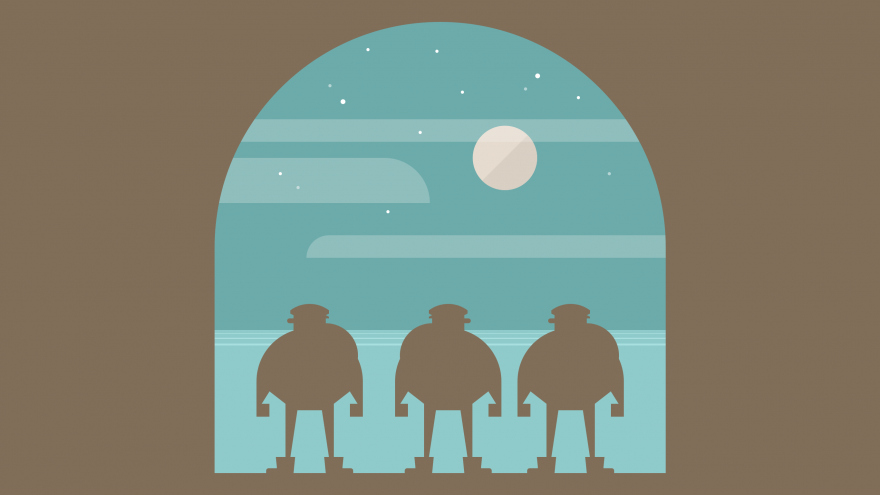 Just hearing the name Burly Men at Sea—along with watching its trailers, filled to the brim with a bouncing, benevolent brawniness–effectively communicates what it’s like to play the game. You embark on a journey as not one, not two, but three Brothers Beard, who put the lumbersexual hipster trend to shame. Heeding the call of the blue siren, you join them as they gallivant across the sea and a storybook of various Norwegian haunts.

“We knew we were making Burly Men at Sea before we knew what it would be,” said co-creator David Condolora. “We had that name in our head before we even started making games.”

The name captures the game’s unique sense of gentle masculinity, with a ruggedness that only goes beard-deep. At heart, Burly Men at Sea is a softie, taking you on what married duo David and Brooke Condolora call a “quiet adventure.” The game consists of many branching narrative vignettes devoid of puzzles and high scores, but with plenty of optional and delightful interactive play experiences.

In the demo I played, you explore a lovely fishing town, complete with all the classic archetypal villagers, like an old crone, a surly man, and a smith. Inside one of the buildings is a chicken coop that does nothing to further the plot, but charms you into exploration anyway. Inviting curious players to discover its small joys, you can click on a mama chicken only to watch her pop out an egg that you can then click to hatch a little yellow chickity (you can actually repeat the process five times, bringing an adorably tiny new life into the world each time). It may not have anything to do with the main story at hand, but “it’s something that both enriches it and lets you as the player have more control over the world.”

As detailed by the trailer (above), the game is setting sail for September 29th, where it will be available on Windows, Mac, iOS, and Android.

the companions mimic the dynamic between Kirk, Spock, and McCoy

But one aspect that is difficult to pick up on in the trailers is their different approach to branching narratives. David and Brooke explained that they didn’t want to fall into the trappings of A/B storytelling, or good/bad moral decision-making. Instead, “we’re trying to let you take action that irrevocably shapes the direction of the story. So it’s much more organic to player action.” Shaping the player’s perception and choices are the three seamen: Hasty Beard, Brave Beard, and Steady Beard.

Aside from being a particularly magical number, Brain&Brain also chose to use three main protagonists because they “think there’s something to three characters with disparate viewpoints.” Taking inspiration from the original Star Trek (1966), the companions mimic the dynamic between Kirk, Spock, and McCoy. “Kirk is the steady guy who has to take two separate perspectives and somehow combine them: Spock, who’s logical, and McCoy, who’s emotional. We’re trying something similar, but in this case you, as the player, must determine which perspectives to move toward with.”

You can find more info here and preorder it on the Humble Store here.