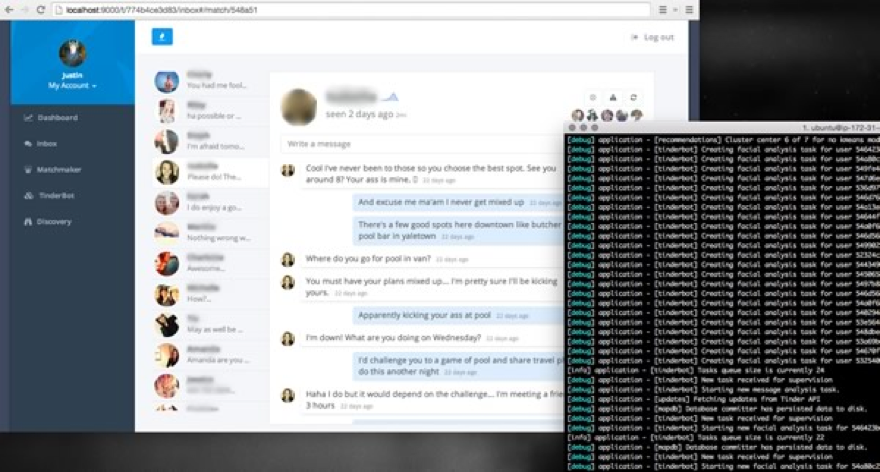 Dating, particularly of the online variety, turns humans into robots. To successfully play the romantic numbers game, you have to go through the motions: expressing interest in every profile that meets a minimum standard, repeatedly sending the same conversation starters to anyone who expresses the least bit of interest. These actions, even when performed by humans, are mechanical—so much so that they might as well be performed by a bot.

Justin Long, the creator of Tinderbox, a bot that automates the tedium of the popular dating app Tinder, describes swiping as Tinder’s “best and worst feature.” This simple interaction, which is used to expresses attraction or disinclination, is compelling to the point of becoming compulsive. Long recalls going out for dinner with friends and noticing that they were all glued to their phones, swiping away into the ether and into the night. “I just got fed up with it,” he says. “I don’t want to be on my phone all day swiping on Tinder. I’d rather just automate it.”

“It was a joke at first,” Long says, “But then I started looking into some of the libraries out there for facial recognition and I said, “Wow, I could really do this!”” Tinderbox uses these libraries to build a model of the faces that its owner is attracted to and against which it compares the profiles of potential matches. It then expresses interest—the famous, dreaded swipes, although bots don’t actually swipe—on its owner’s behalf. If a match is reciprocated, Tinderbox starts sending messages and, if it receives multiple positive replies, notifies its owner that there is a serious conversation to join.

Long kept Tinderbox running 24/7 for three weeks. “It was great,” he says, “I matched with more people I was attracted to (and) they were more interesting.” According to his website, he went on “at least ten dates.” While he was working at 3 Tier Logic, running errands, and getting on with his life, Tinderbox was searching for matches. “I’d say the quality of experience I was having was really good,” he says. The bot worked. If anything, it worked too well.

“I’ve turned the bot off now,” Long confesses. “When you have something like that dedicating 100% of its time figuring out Tinder for you, it’s obviously going to come back with a ton of choices. I actually started getting a little overwhelmed by it.”

Long has not, however, given up on Tinderbox. He released the bot’s code and estimates that, in a single day, 800 people used it. The early feedback he’s received suggests Tinderbox works for some—though not all—users. These users have also found bugs: bugs that Long hadn’t noticed, bugs that he plans on fixing. It’s entirely possible that he won’t be alone in working on the bot. Long, who does not wish to leave 3 Tier Logic and harbors no commercial ambitions for Tinderbox, has released its code under a non-commercial license. “Nothing is stopping someone from taking the idea and trying to run with it,” he says. “If someone wants to do it, I would encourage them.”

The biggest determinant of one’s experience with Tinderbox is not the bugginess of its code but the gender of its user. In its current state, Long says “[Tinderbox] has been designed for guys.” He once tried to set it up for a female friend but forgot to change her bot’s preprogrammed messages. “It was a disaster,” he recalls. “It had guys reporting her for spam, sending her abusive messages.” Bots like Tinderbox are not made to subvert unequal expectations placed on women. If anything, bots seeking to efficiently navigate Tinder, must play into the prevailing gender norms. Thus, when asked to imagine a female Tinderbox, Long suggests that a few cosmetic tweaks to its messages would not suffice. “Socially, we still expect the man to start conversations,” he explains. “I still think that the female bot should wait for the man to initiate the conversation.”

Tinderbox, with its inhumanly consistent human-inspired logic, gets to the heart of online dating. It is now possible to meet more people online, as Long did with Tinderbox. Yet the act of sizing up potential matches, as embodied by Tinder’s swiping motion, has become a menial chore: What was once the work of one’s subconscious can now be outsourced to a bot. Tinderbox frees its users from their phones but, in so doing, leaves the underlying inequities of online dating untouched, and perhaps further entrenched. Long is correct when he says “This isn’t something somebody could have done—not easily anyway—twenty years ago,” but what does that say about technology and romance in 2015? “I don’t want to create an answer to that,” Long says. “I just want to say that it’s thought provoking and it’s something we should reflect on.”