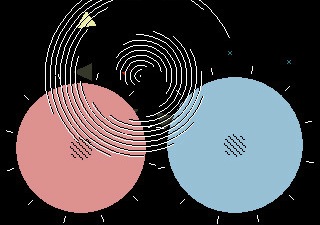 A teaser trailer for Eliss Infinity, the sequel to Steph Thirion’s Eliss, surfaced over the weekend, calling for a polite round of Internet high-fives among those with good taste and a good memory. Although the video doesn’t reveal much aside from a release date of Feb. 6, expect to be madly pawing at artful visual design.

The first came out in 2009 before every other person on the planet had an iPhone, so it’s somewhat unknown for being one of the great early mobile games to really take advantage of multiple fingers touching, pinching, and/or gently caressing each other. The first game was a fickle beast in the difficulty department, requiring you to separate and recombine pixel-y orbs as they’re slurped down vector-borne black holes. It was practically essential that those fingers belonged to more than one person. Just make sure to play it with someone whose hands you trust, or bring hand sanitizer.