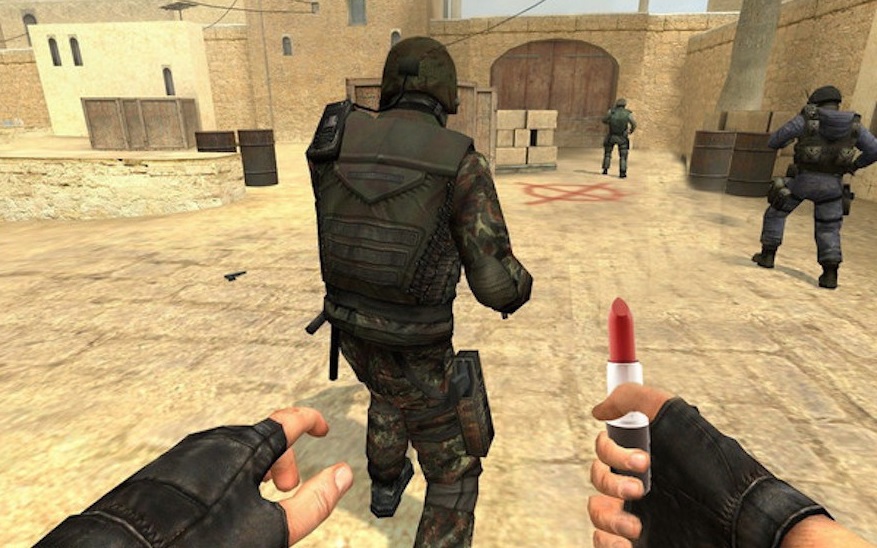 Frequently placing second among Twitch’s most streamed games, Counter-Strike: Global Offensive (2012) has become an institution among the website’s community. At any given moment, there are hundreds of streamers playing the title, all vying for attention as they each try to figure out the most entertaining way to shoot a terrorist. In this space, style is as important as skill, which is what makes Chloe Desmoineaux’s Lipstrike so clever. In Lipstrike, Desmoineaux streams normal matches of Counter-Strike, but rather than using a traditional keyboard and mouse to control her character, she has instead modified a normal lipstick container to serve as her controller, so that she can slay the competition both on the battlefield and in front of the camera.

Having attached a small USB stick with minimal controls to her lipstick, Desmoineaux plays Lipstrike entirely with one hand. She can move forward with the left mouse button, aim with the right mouse button, and switch weapons with the scroll wheel. The best part, though, is how she actually fires her weapons. To shoot, Desmoineaux simply applies her lipstick, meaning that as her enemies die at her feet, she only comes out looking more fabulous.

the most stylish person on the server

Makeup is often characterized as a cage for women, encouraging us to adhere to unrealistic beauty standards that we couldn’t achieve without it. But within the makeup enthusiast community, it’s seen as something else entirely. It ceases to be a tool of conformity and instead become an artform, where the user’s face is the canvas. Here, women—and people of all genders—alter their appearance to their own desires, at once asserting both their identity and their bodily autonomy. This is the meaning behind the term “fierce.” And as I watch Desmoineaux shoot down countless other players who are most likely using far less challenging control schemes, I can’t help but think “Damn girl, that is fierce.”

Lipstrike perfectly captures the idea that in the liberation it offers, applying makeup is not a demure act of self-defeat, but rather a radical practice of self-actualization. It’s fitting that Desmoineaux’s choice of color is a bold red. Just like the blood of her enemies.

You can find out more about Lipstrike over on alternate controller site Shake That Button, and you can follow Desmoineaux’s weekly streams over on her Twitch channel. Additionally, archives of her past streams are available over on her YouTube channel.