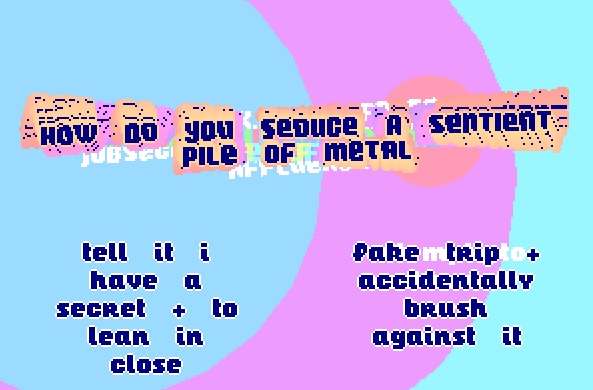 WHY NOT is silly, sure. At one point I was a narcissistic ghost engaged in sexually frustrated combat with a sentient pile of metal. Given the penchant for whim that this text adventure’s narrator has, the only way I can describe the path that led to this point is “bizarre.”

This is hardly the strangest event to be found within WHY NOT. In fact, it could be considered relatively normal. Each point along this stream of consciousness-style journey offers you two choices; one on the left arrow, the other on the right. Do you want to seduce or flail? Insult or remain still? Break all your bones or separate the dicks from the gold?

You can never be sure of the results of making a choice, and the most surprising are those that alter your state. You start off “feeling normal,” but can become a goose, a rock, even a hopeless gelatinous heap. Each of these states can have adjectives added before them to spice them up, too.

Break all your bones or separate the dicks from the gold?

Sometimes siding with one choice over the other will have logical progression, like committing to an action and then seeing its consequence. To use the initial example again, if you whisper secrets into the sentient metal pile’s ear, it won’t be long until you’re able to make love to it. Discovering where your choices can take you, and the constant surprises along the way, is an absolute delight.

Other times you can choose to be lethargic or ignorant, at which point the narrator will press you to make a choice. Continuing down this indecisive path leads to poignant conversations during which the narrator reveals its character and feelings. It’s trapped inside a videogame. You soon find out that the narrator considers narrating your journey its job. But it’s miserable and would prefer to have other interests. The problem is it can only see life the way it presents it to you: as two choices. Either it narrates and suffers, or it dies.

This is when WHY NOT seems to reveal its true nature. It also goes some way to explaining why WHY NOT is as strange as it is. After all, the narrator’s life depends on you getting lost in webs of choices, looping back on yourself, and finding the journey interesting enough to carry on rather than exiting it. The narrator doesn’t really care about making sense.

When you’re exposed to this part of WHY NOT, it begins to feel like less of a videogame, and more of a tired entertainment service. And you’re the shitty customer annoying the staff (the narrator), but on the same token, you’re giving them their purpose. It almost makes you feel bad.

WHY NOT could be introspective; I like to read it as allegory. There’s certainly room to say that it encourages us to think about how videogames are designed to please us, rather than challenge our notions and feelings. So often, those who wish to make money by selling videogames base design decisions on market research, player complaints, and the ethics behind providing a good service. Like the narrator in WHY NOT they, too, are trapped within their ways, endlessly repeating ideas, seeing death as the only alternative.

This may make you question what videogames could be if they weren’t always trying to achieve a pleasant user experience. What if they were corrupt, ugly, or cognitively difficult? Why not?

WHY NOT can be downloaded for free on Game Jolt or itch.io.