VR Face has got to die already

by Kyle Kukshtel @kkukshtel
VR Face has got to die already

The launch (and subsequent success) of the Oculus Rift Kickstarter back in August of 2012 was notable for many reasons. But one that stands out is how the hardware was pitched not with abundant screenshots of the experiences or games to come, but instead with shots of the Rift itself. For a whole $275 USD, you could get yourself a bid in the promised VR future, the only explicit incentive being the VR-ification of a barely-remembered mech game named Hawken (2012).

In doing this, Oculus positioned the Rift not as a platform for new experiences, but instead as a remediation of past experiences through the “new” lens of virtual reality. Pledging didn’t get you the ability to play any new games—it just got you a headset.

This set a precedent for the new wave of VR tech as a whole. Hardware could be pitched without a definite software coupling, or with the software taking a backseat to the device itself. As I write this, the landing page for both the Rift and the HTC Vive show only the headset, with no pictures of actual content. This reinforces a false tautology that a headset is VR. But any examination of the phrase “virtual reality” immediately undercuts this statement: virtual reality is not a headset, it is a virtual reality.

Burdened with resuscitating an entire medium while also needing to prove itself as a viable videogame platform—but lacking the exciting new software that typically smooths over this process—the experience of VR itself became the target of any and all discussions around it. Back in 2013, VR’s new dawn, people wrote longform pieces on the purportedly amazing device, giving both those tangentially interested and those who backed the Kickstarter something to latch onto. But, like a harlequin novel that can never fully capture the steaminess of sex, words only get us so far. People needed a way to not only speak about the Rift, but also convey the “revolutionary” experience it could give its user. The thing that encapsulated the notion of “experienced” awe, wonder, and amazement was “VR Face.” Paired (almost immediately) with the rise of Oculus and the new wave of VR, VR Face became the de-facto way to communicate VR.

Here is the quintessential VR Face photo. A man, usually white, looking into one of the new VR HMDs, mouth agape. Versions of this image, repeated over and over (even making Oculus’ official press images), have become synonymous with the new wave of VR. Paired with impression pieces, these photos attempt to convey the admittedly awe-inspiring nature of the virtual reality they present by having the person inside the HMD outwardly express an experience of awe, genuine or not.

These images—which invite the viewer to imagine what could possibly inspire an expression like that— have a similar effect to promotional screenshots for a game. Those who look at VR Face images want to see what the person with VR Face is seeing. This is obviously important for the ultimate success of this round of VR technology, as viability and interest in these devices as a product will keep the whole wave moving. VR Face deftly sidesteps the need to show a tangible reason to be excited for VR—the pure human expression of awe, wonder, etc., provokes viewers to wonder what exactly is so amazing inside that small, literal black box. Presented most often without context clues, VR Face speaks to the notion that you have to see it for yourself to understand. Even if the insides of these black boxes proves boring, the mystery has clearly piqued the interest of many.

an idiot with a dream

But what started as a documentation of faces in awe seems to have swerved more towards comedy, not least of all because, almost four years later, VR still comes up short in the public eye in terms of delivering on its promise. It’s easy to look at someone with VR Face in 2012 and think of them as an idiot with a dream, but now, in a world where the consumer version of the Rift, VIVE, Gear VR, and Cardboard have all launched and garnered complaints for failing to deliver an experience that validates the device, people who still have VR Face can easily be seen as fools. We’ve seen some of what’s inside that black box, and we aren’t that impressed.

Or, we haven’t seen inside at all, and that’s the bigger issue at hand. VR Face and its continual use represents another failure of interactive media at large to accurately convey the experiences they purport to give in a context outside of the medium itself. Needing to “see it to believe it” is a wider issue for games and other interactive media that fail to show outside observers what makes the experience unique, most often relying on larger than life representations of the inner feelings or the actions of someone playing games. In the same way that showing a picture of a dog looking at a food bowl doesn’t accurately encompass the reality of what pet ownership is like, showing a look of awe on someone’s face with a black box strapped to their head has predictably failed to convey to the general public why VR matters.

This disbelief has then led to doubt, or at least a second guessing of the messianic rhetoric of the Rift’s campaign, and a further fascination with those that, despite any apparent reason why, have chosen to stick with VR and continue to explore it. The continual reassertion of VR Face by both the mainstream press and VR entities like Oculus, even as bespoke and fantastic software rolls out, acts as a constant reminder of this failure. This, in some cases, also acts as a sort of techno-shaming—a way of scolding others for the use or implementation of (usually) novel technology.

In impression pieces, showing screenshots of the game or media being talked about acts as an endorsement of the media itself, an assertion that there is something worthwhile to see. Showing VR Face (especially if not your own) acts similarly, but also allows one to maintain a critical distance to VR, keeping it separate and “othered.” The use of images with VR Face allows one to engage with the development of VR without directly needing to endorse it. The (until recently) evasive nature of this new wave of VR, with devices slowly rolling out, meant that those that talked openly about using VR multiple times became figures; tech writers who liked VR became VR writers. This would obviously need addressing if this wave of VR should fail like it once did before.

The concept isn’t a new one, and happened most recently with the rise of “always on” devices like bluetooth headsets or Google Glass. The example of Glass most closely aligns here, with techno-shaming (in a much more direct form) reaching its peak with the coining of the phrase “glasshole.” The phrase, ideology, and movement behind glassholery was both the lightning rod and death knell of the community in and around Glass. Glass was a technology that was distancing, no matter how much its explorers initially tried to make wearing it as normal as checking your cell phone.

A New Yorker article on this topic relates the idea of the “glasshole” to the idea of “The Walkman Effect,” “a term coined by the music scholar Shuhei Hosokawa in 1984, [that] refers to the disconnection between a person using headphones to listen to music and her surroundings.” The idea was also explored earnestly by Rainer Schönhammer in “The Walkman and the Primary World of the Senses” (1989), whose take on “The Walkman Effect” resonates both for Glass, Glassholery, VR Face, and VR at large:

“I have learned that many people react the way I used to react. They judge the people with earphones to be dumb, childish, immature, silly, withdrawn, unwilling to communicate, egocentric, narcissistic, autistic, and so forth. Since I began to reflect on this kind of creation it ceased to be self-evident for me. The negative assessments cited above have become mere quotations; they have lost their affective power. Nevertheless, I still feel slightly irritated. What, then, is the experiential kernel of this irritation, and why does this irritation tend to be expressed in this way?”

People with earphones seem to violate an unwritten law of interpersonal reciprocity: the certainty of common sensual presence in shared situations […] By using a Walkman, we lose contact with the world, which becomes silent. At the same time the music to which we listen and with which we fuse reestablishes our connection with the world but in an unfamiliar way. What we see ceases to be what it used to be.

Though VR and VR Face do not go through this process of Schönhammer’s “fusing” (unless you count bumping into objects), it is a technology similarly distancing from the real world. The mental state of someone in VR bifurcates, leaving the body thereafter awkwardly straddling two worlds. Both ourselves and those around us are forced into reconciling with our newfound dual states. The collective fascination with looking at those in VR then stems from the fact that to look at someone in VR  is to look at a body both here and there. “There” is an unknowable place, one we cannot also see, while “here” is comically limited and provides only a half-truth about any observed VR-engaged individual. Schönhammer’s initial dismay at those in headphones applies here as well then; those in HMDs are unable to reciprocate “the certainty of common sensual presence in shared situations.” With one hypothetical foot in VR and one in the “real” world, VR-engaged and observed individuals are only half-connected to the same reality you wholly occupy.

Without providing a proper way to convey what VR is “like,” VR Face has become the predominant mode in which to express the concept of VR. Though it will likely persist as an image used to talk about VR in general, there have been some notable advances that, in the future, may do better to convey the complex experience of being in VR. Games like Fantastic Contraption and Audioshield have gone for a “mixed reality” approach, compositing live action footage on top of in-game footage to create a (albeit non-interactive) video to show a viewer what interacting in the game is like. Other technologies continue to mature as well, with companies like Sketchfab breaking out from the crowd when it comes to displaying 3D assets in line with text, like the embedded scene below:

One can see how these technologies could be used to give someone a better understanding of what an action or interaction in VR is like, providing the outside viewer a very small slice of the promised experience. This slice relies on the work itself and a viewer’s engagement with it, not the expression of a face whose eyes we cannot see. As both the experiences coming to VR and the technologies we use to talk about it mature, VR Face and its implementation will hopefully cease to be a foregone conclusion or surrogate for a VR experience, but instead represent an artifact of a time in which VR was going through predictable growing pains. 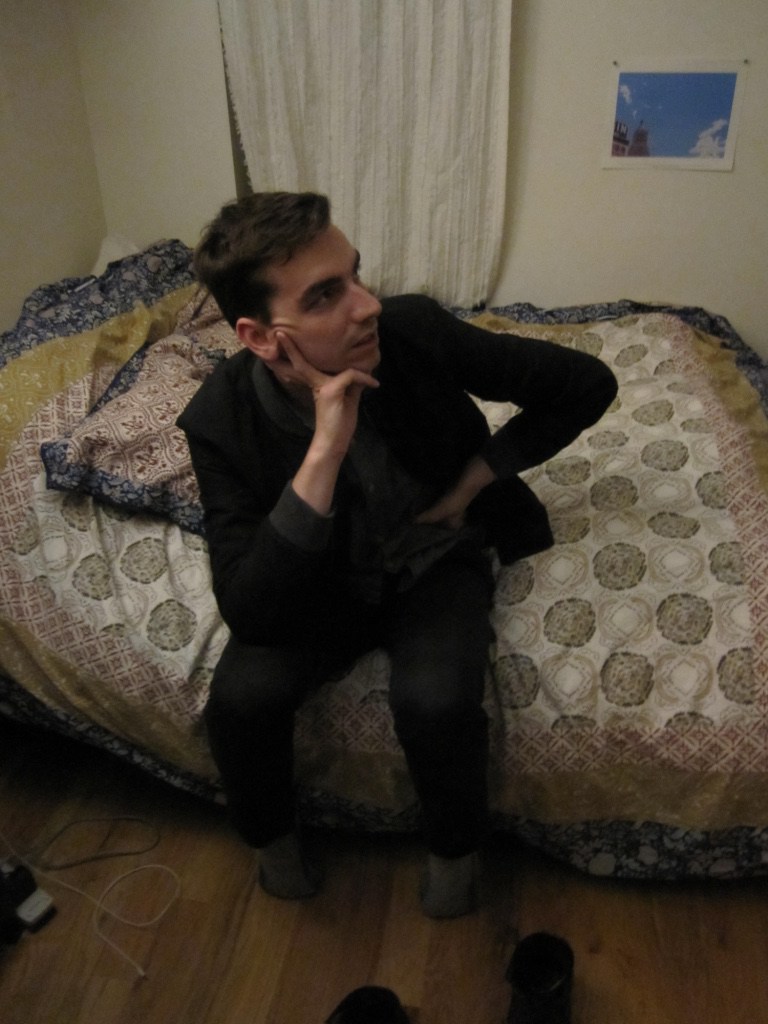